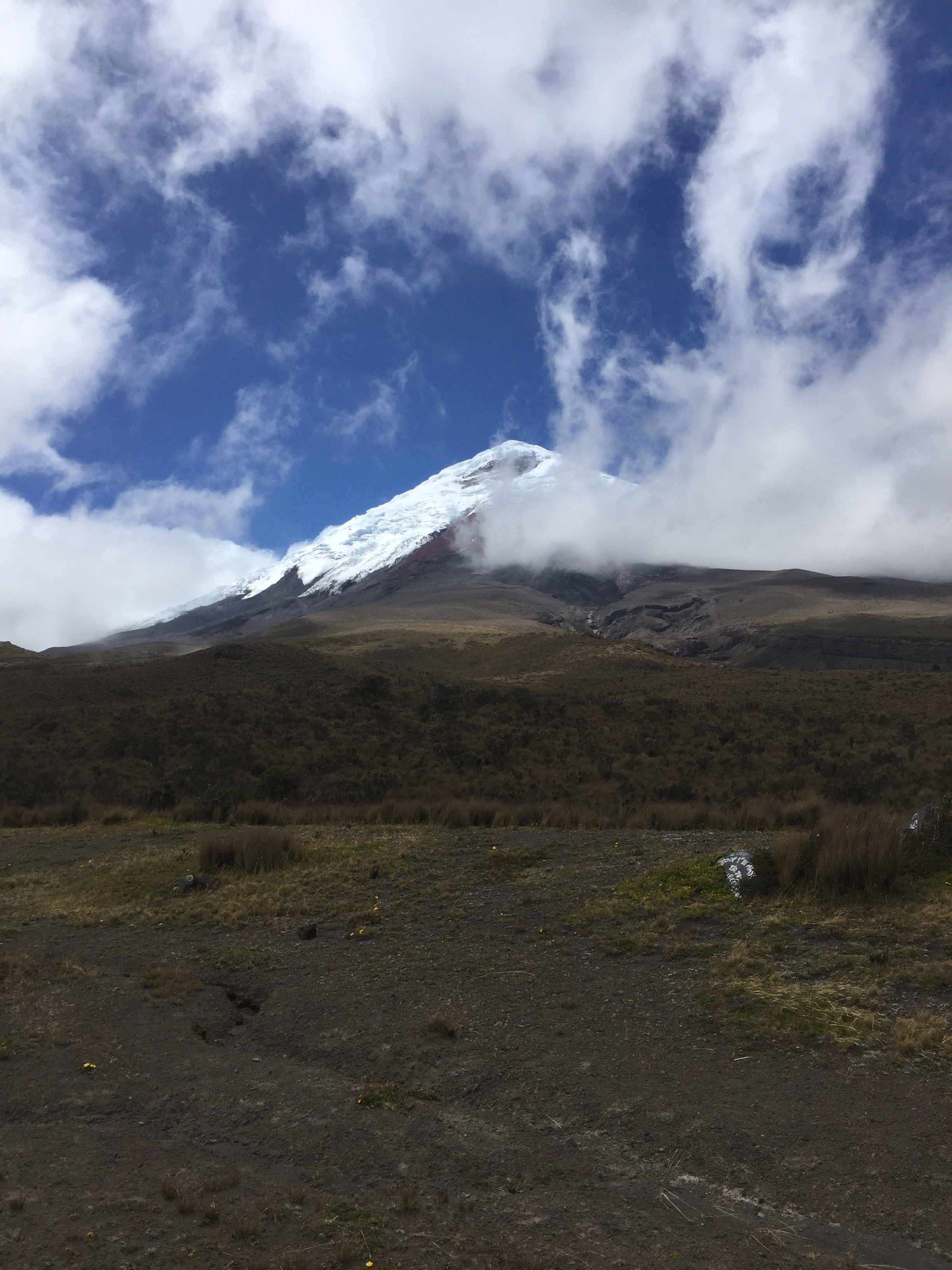 The challenging ascent and descent of Cotopaxi Volcano in Ecuador.

The struggling 5,000 meter climb and subsequent bike ride to a lagoon was an incredibly rewarding physical experience. 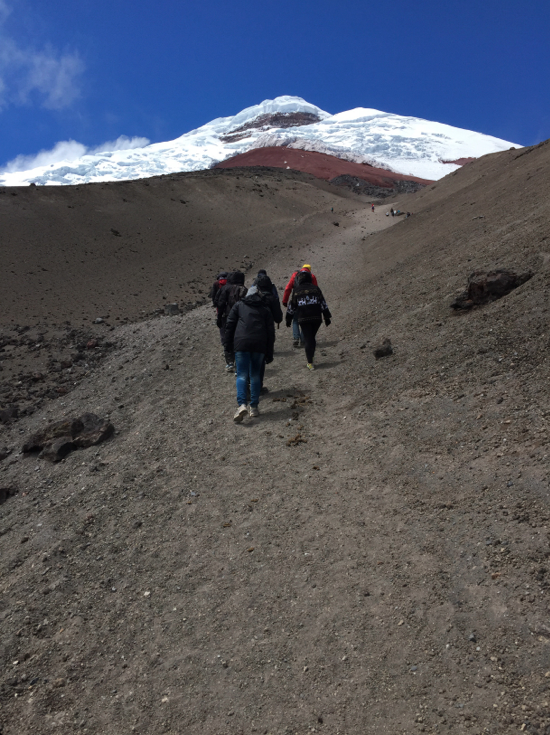 I stood outside the bus at the base of Cotopaxi Volcano shivering as I watched the guide put on a winter coat, a vest, a ski mask, goggles, gloves, and ski poles. I did not bring proper attire for high altitude climbing. I told myself to suck it up. I spent the last five years dealing with Boston winters. Ecuador doesn’t scare me. Even so, I donned my new Alpaca gloves and an extra shirt that a French guy in my tour offered me. In total I had on cargo pants, a tank top, two long sleeved shirts, a sweatshirt, a rain coat and my hiking boots. The wind went right through me, depriving me of the possibility of warmth from the strong sun and whipping my hair into a rat’s nest. I braided the knots and hid them in my hood.

Looking up, the mountain before me took my breath away, a slanted wall of red soot with a blinding white peak. I understood why the Incans called it “Neck of the Moon.” We started the incline, instantly far more strenuous than I thought it would be just looking at it. After about twenty paces, the others in my group and I gave up on small talk, each of us breathing the thin air far too heavily to be able to keep up conversation. My heart was soon pounding through my five layers. Wisps of hair were escaping from my hood and finding a home in the corners of my mouth, and I tried in vain to use my gloved hands to push my hair out of my eyes and the snot from trailing uncontrollably out of my nose. 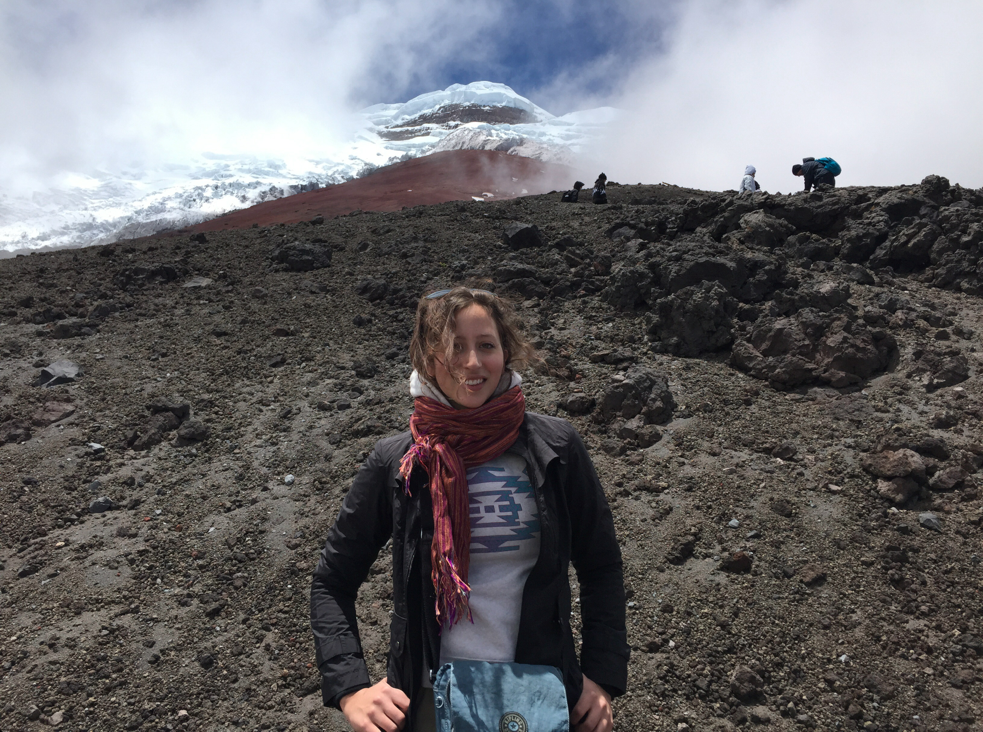 About half way up I wished I had listened to my pep talk about Boston winters; I was sweating hard from the exertion. There were about 15 people in my original group, but I could only see a few Germans around my own age. One graciously extended a hand to me just as I was slipping on some loose rocks. We stopped probably every fifty meters or so to catch our breath and to blink away the spots in our eyes. Our consolation for the struggle? The view. When I wasn’t looking at my feet, trying to time my breaths with my steps like Nigel Thornberry from The Wild Thornberrys taught me in that episode they went to Machu Picchu, I was looking ahead at the slowly growing glacier, and behind me at how far I had come. The higher up I went, the more I was able to see of the road we drove on winding like a snake before me, the lagoon we would visit later, Cotopaxi’s mountain siblings standing proudly in her marvelous shadow, and even the city of Quito beyond. I had to resist the urge to take a photo every time I stopped to breathe because the clouds shifted constantly, always revealing a new part of the mountain. With each step I took on the zigzagging trail, I was more and more proud of myself, a feeling that was quickly diminished as mountain children sprinted easily up the steep inclines past me. 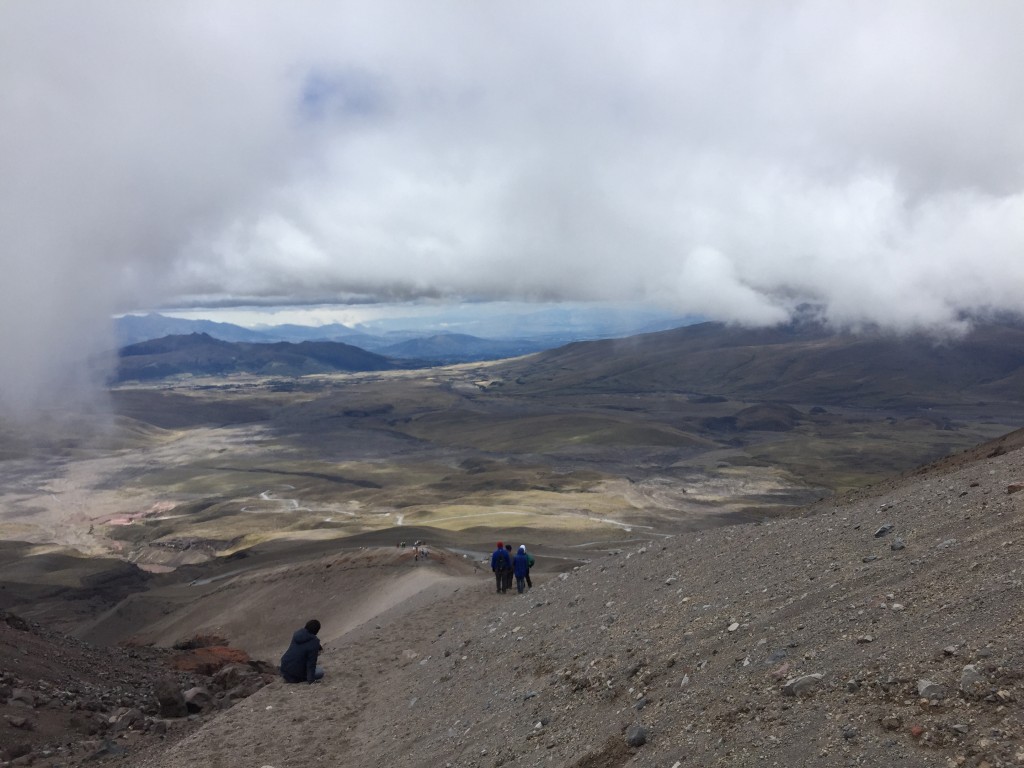 During one of my breaks, I sat perched on a jagged rock and watched as a sweet father made the trek with his young daughter on his shoulders. He smiled at me knowingly, and seemed to respect that a gringo had come to pay homage to his queen. He reassured me that I was close to the rest lodge and continued on his way, making his child giggle and pointing out sights to her. I sat there, waiting for the wind to die and for the footsteps to stop so I could meditate in the utter silence. I closed my eyes and was at peace. But soon I heard the huffing and puffing of other hikers. I opened my eyes to see a few kids pushing a cart up the mountain, their dad pulling it in the front. All I could think was, Damn, what badass kids. You couldn’t pay an American kid to work that hard. 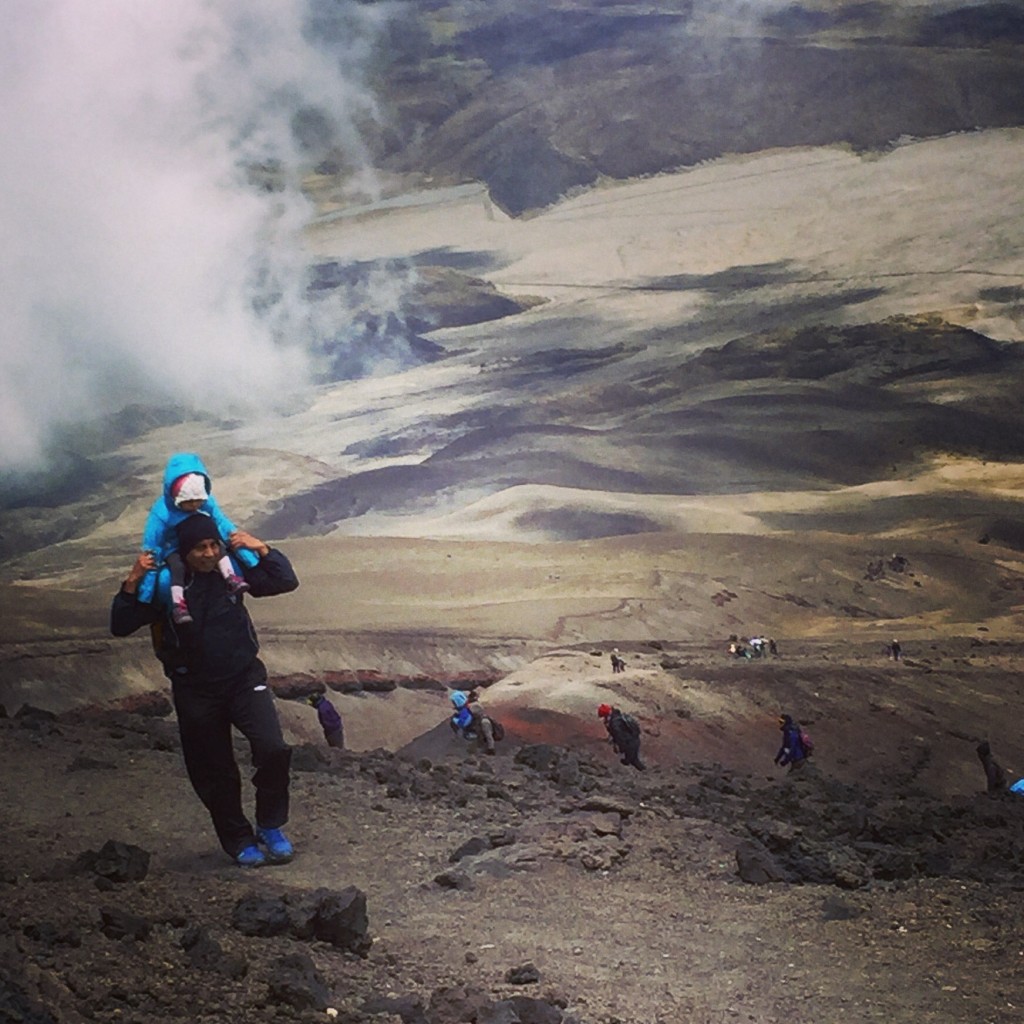 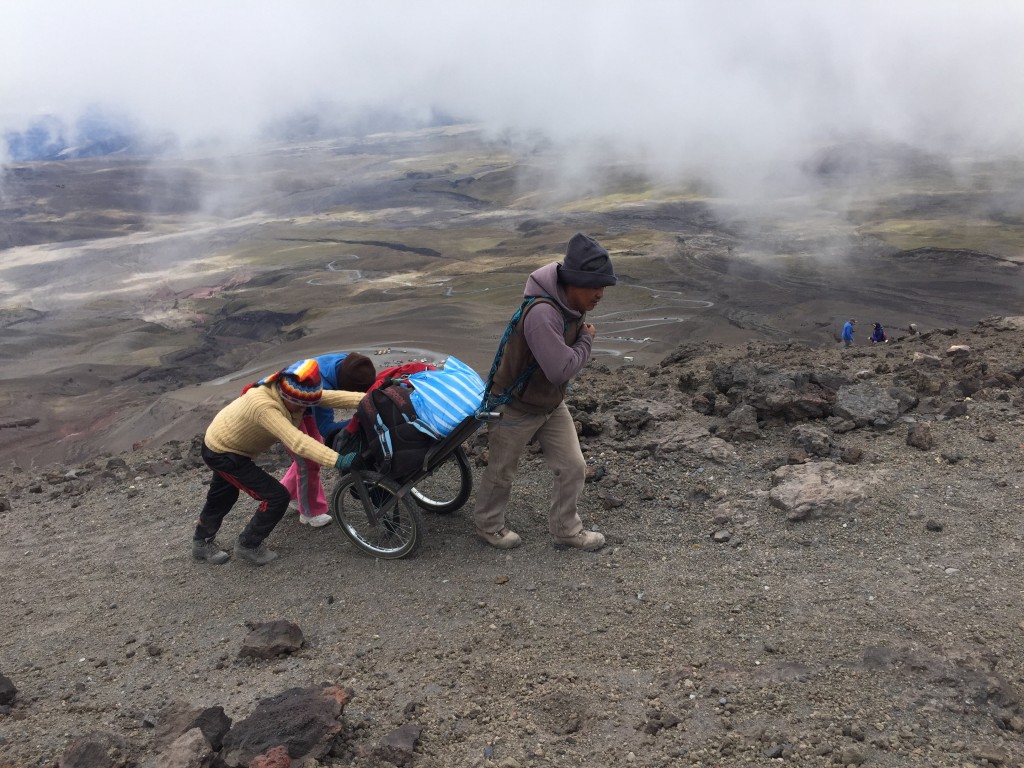 At last, I made it to the rest lodge. I call it a rest lodge because after about an hour and a half of inclination, we were still not at the top. My clothes were soaked with sweat, I was swallowing my snot and hair, and my head was pounding from lack of oxygen. We hadn’t yet reached that pristine white that I had been staring at like a beacon, but part of me hoped this was the end anyway. Apparently my guide had every intention of continuing upward, but the sissies were allowed to go back down and wait on the bus. A few of the older Spanish tourists and some of the Germans took the bait, but I didn’t come this far just to wuss out when I was only another twenty to thirty minute hike from the holy land. I bought some reviving $2 hot chocolate and bread from an Ecuadorean angel, and that was all the comfort I needed (it was also all that was available…Banos? No. Servilletas? No. Agua? No.) Another American and I noted how much money that woman could make if she sold water, napkins and other refreshments there as well, and how that same cup of cocoa would have been $8 in the States. But alas, that is American way, not the Ecuadorean. 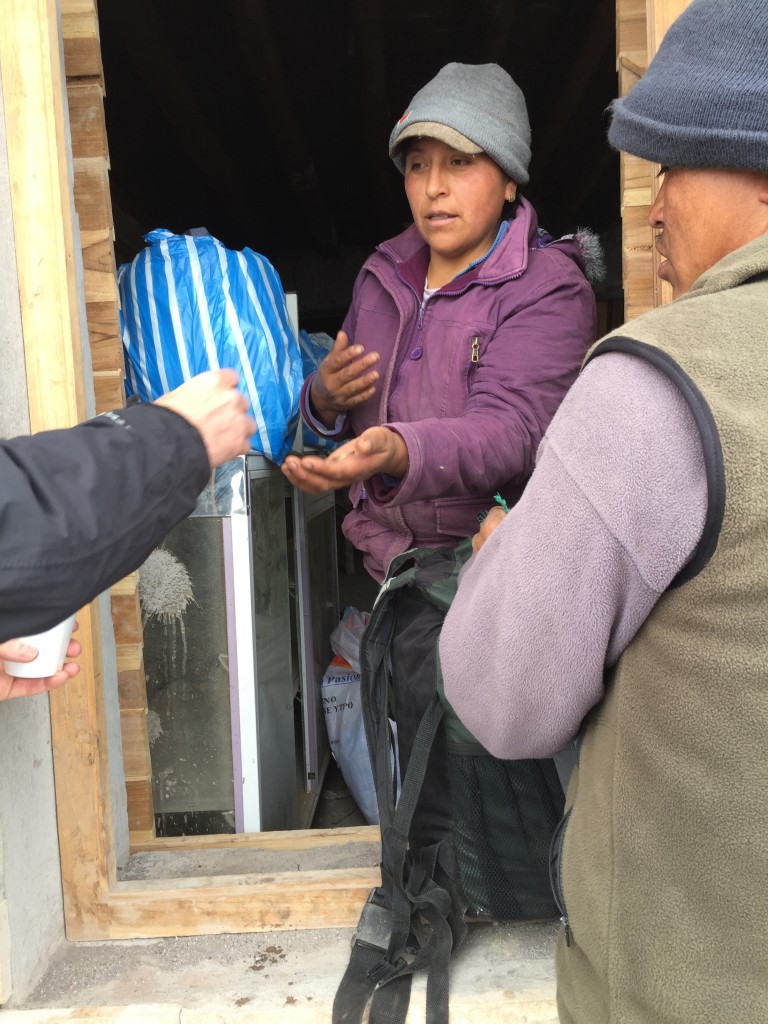 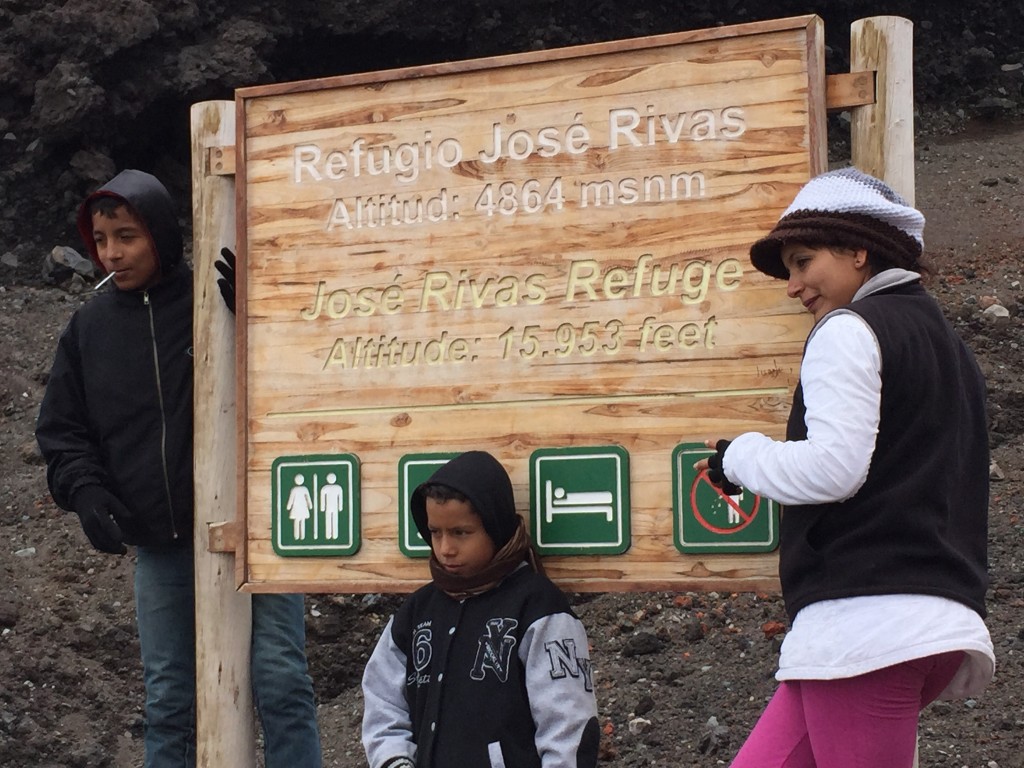 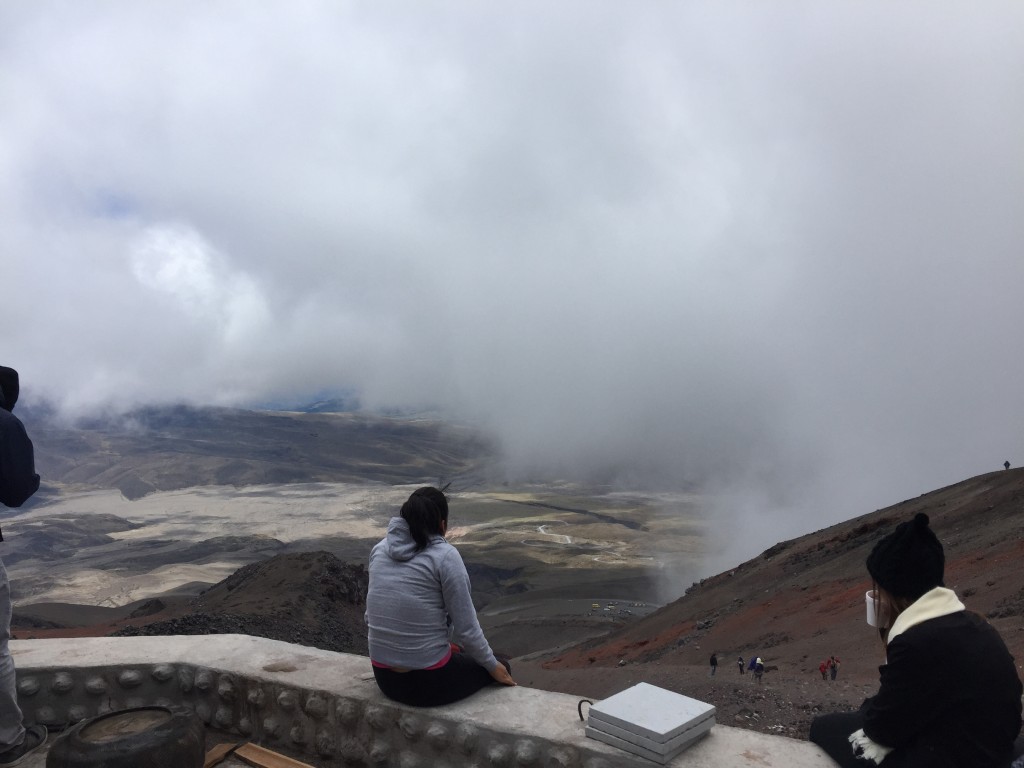 We continued up into the clouds. After my half hour rest, I was shivering again and eager to keep moving. The incline got steeper and I often found myself climbing with my hands as well as my feet. The dusty red dirt was coloring my new gloves and lining the inside of my mouth. I was making my way over some solid rocks when I realized how close I was to the ice. My stomach lurched, and it was too much for me. I plopped onto the ground to catch my breath for the last time before I reached my destination. A German offered to take my picture. Then it was just a hop and a skip over a creek of melting ice and I was waiting in line to have my picture taken in the middle of the glacier. It was bright, despite the shade from the cloud we were in. (The UV rays were strong up there and my face got very sunburnt.) At some points, all I could see was the ice in front of me, the red soil beneath me, and the white of the cloud. 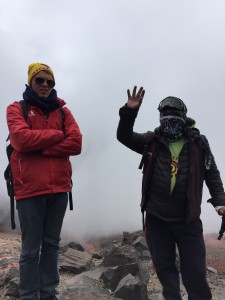 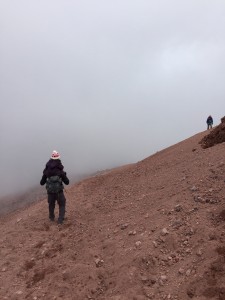 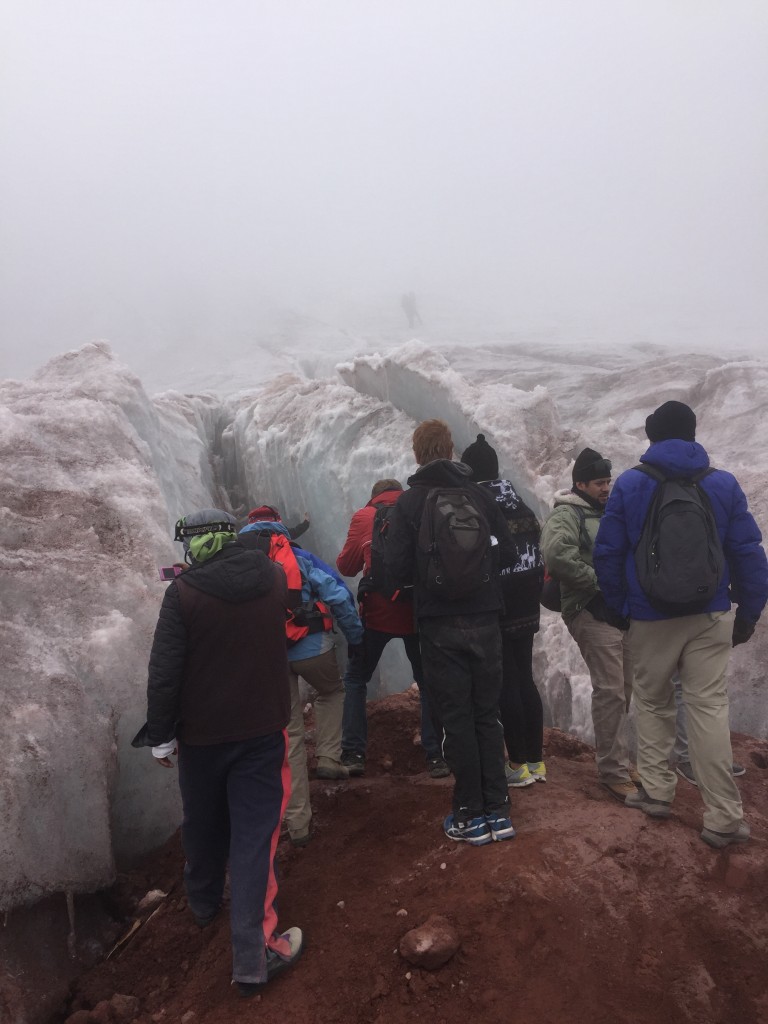 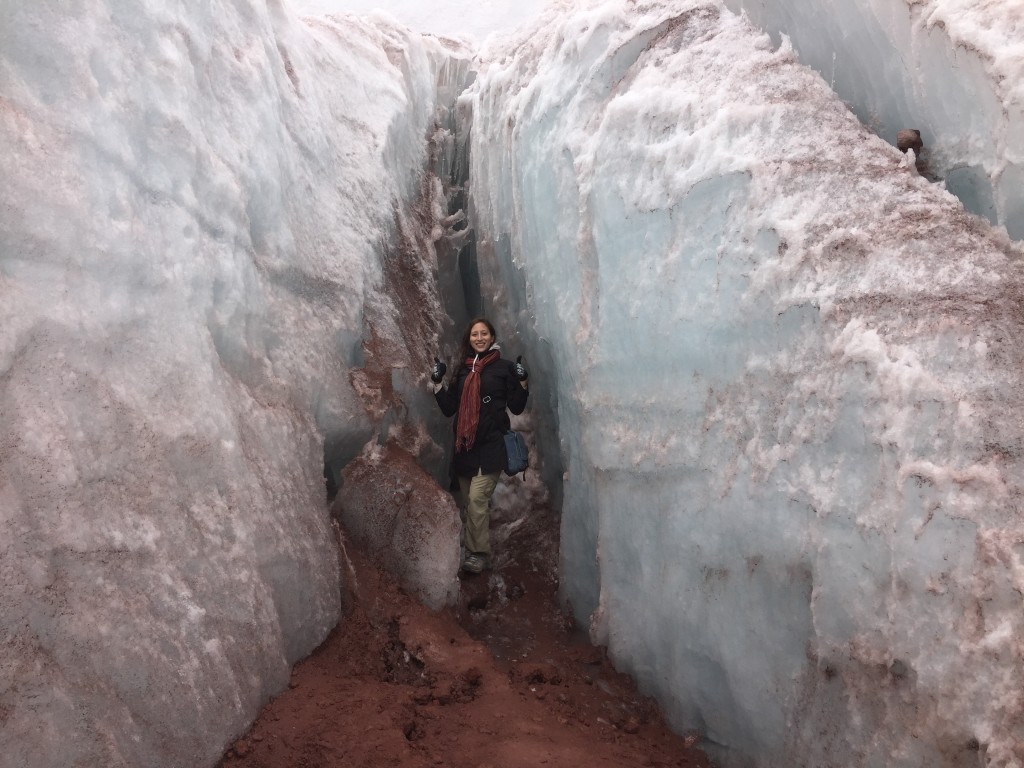 When I had had my fill of pristine views, and when our guide declared it was time to go and started calling park security on people who were far on the ice without proper ice gear, I reluctantly made my way down. Going down the mountain is a whole other challenge. I slipped and stumbled and slid and busted my ass on some rocks before I got the hang of it, thanks to a native who taught me the swagger of descent, pointing both feet forward, leaning back on your heels and sort of slide-bouncing while swinging your arms for balance. On my way down, I passed other hikers with the same exhausted looks on their faces that I probably had on my way up. I nodded at them reassuringly. Vale la pena? Is it worth it? they’d ask. Si, I’d say with a smile. Vale la pena. Es increible. I made it down before the rest of my group, plenty of time to lighten my shoes and socks of the dirt that accompanied me through my journey.

With a cheesey smile on my face, I sank gratefully into the comfortable reclining bus chair to the applause and questions of those whose physical stamina couldn’t handle the second part of the mountain. I was hungry and exhausted, but felt accomplished. I was proud of myself. But it wasn’t over yet. The second part of our adventure tour was soon underway. After a short bus ride that I slept through, we stopped on the side of the road, amid some smaller mountains and plateaus. Those who felt up to the challenge of mountain biking were asked to step off the bus and put on helmets. Our guide sternly reminded us of the waivers we had signed stating that we were physically fit and trained in the exercises of hiking and biking. I’m a competent city biker, so naturally I wanted to join the mountain bike trip down to the lagoon. 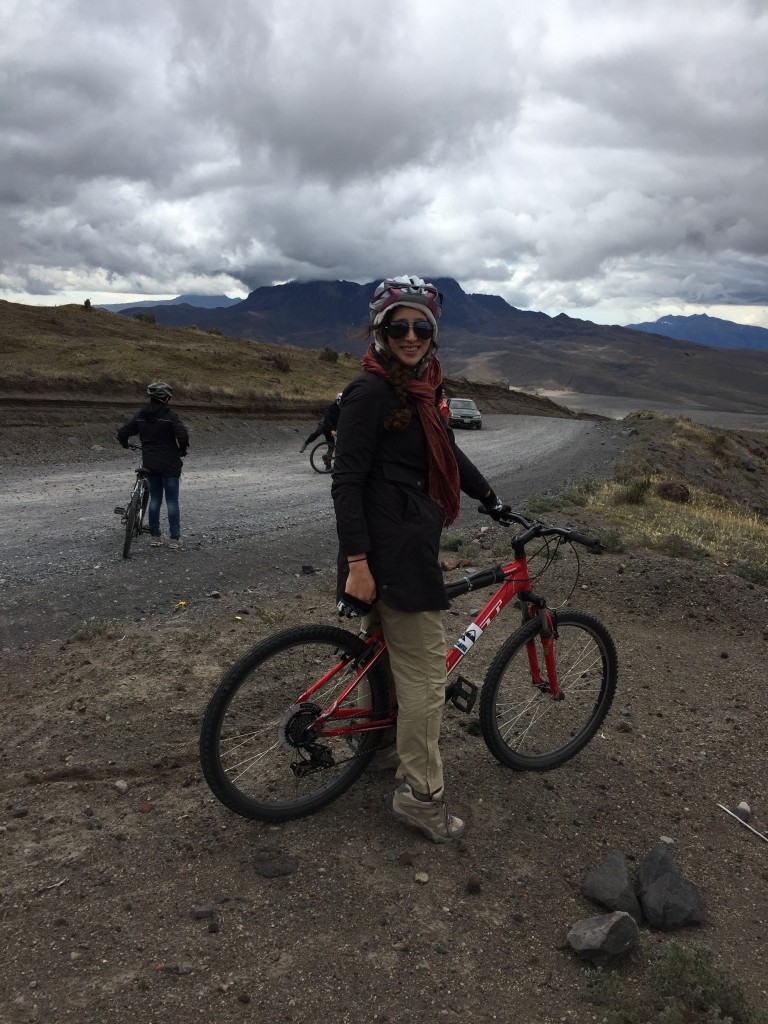 The second I parked my ass on the small, hard bike seat and felt the back wheel skid on the gravel without my permission, I knew I was in trouble. But I don’t give up. The procession began with a tall blonde German boy in a bright orange vest. I was second, but not for long, because I soon ate it and tumbled off my bike. I took the rest of the way down easy, and thankfully it was all down hill. The road was unbearably rigged and bumpy and covered in small and large rocks. I dodged these obstacles, gritting my teeth and screeching most of the way down, not daring to look at the beautiful scenery around me for fear of missing a curve in the dirt or a bump in the road that would send me flying. The image of a girl from my hostel who had cut up her face falling off one of these mountain bikes seared in my head. My hands were killing me from holding onto the handle bars for dear life. 60% pressure on the right for the front wheel and 40% on the left for the back wheel. That’s what my instructor told me to do, and pretty soon I understood why and was flying down, able to glance up every now and again to take it all in and realize that I was alone and could see none of the other bikers ahead of me. For some reason I wasn’t worried. I had control of my bike, and though it was physically challenging, I had my bike and a general idea of where I was headed. After all, I had seen this very road ending with the lagoon when I was climbing the mountain. 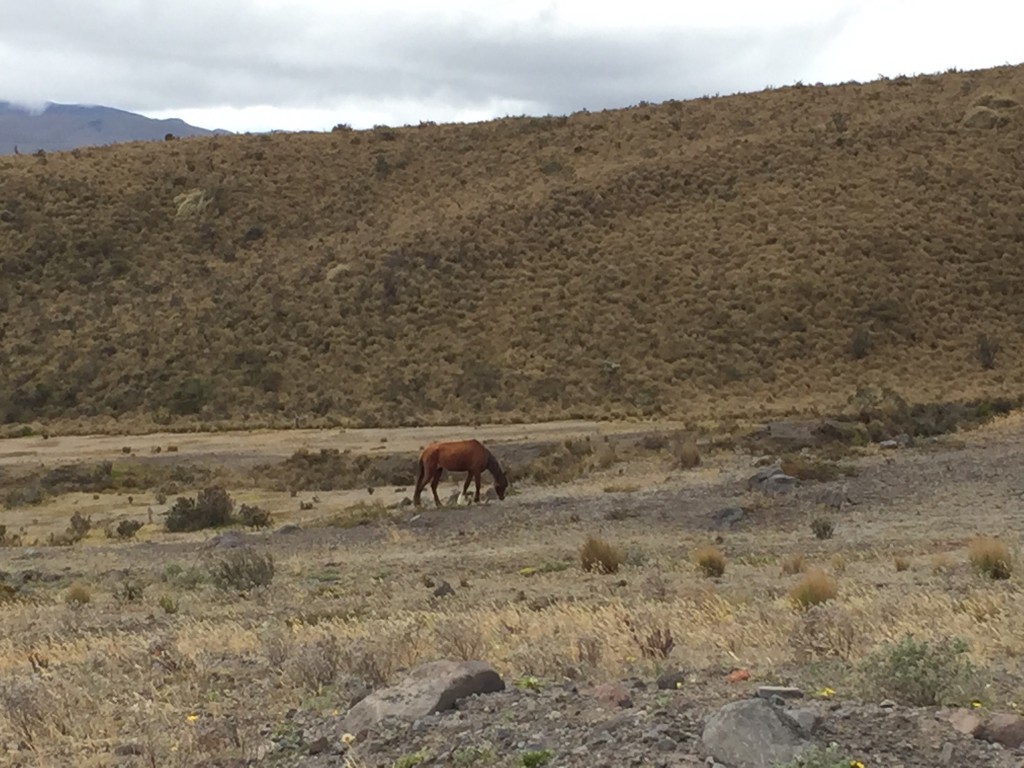 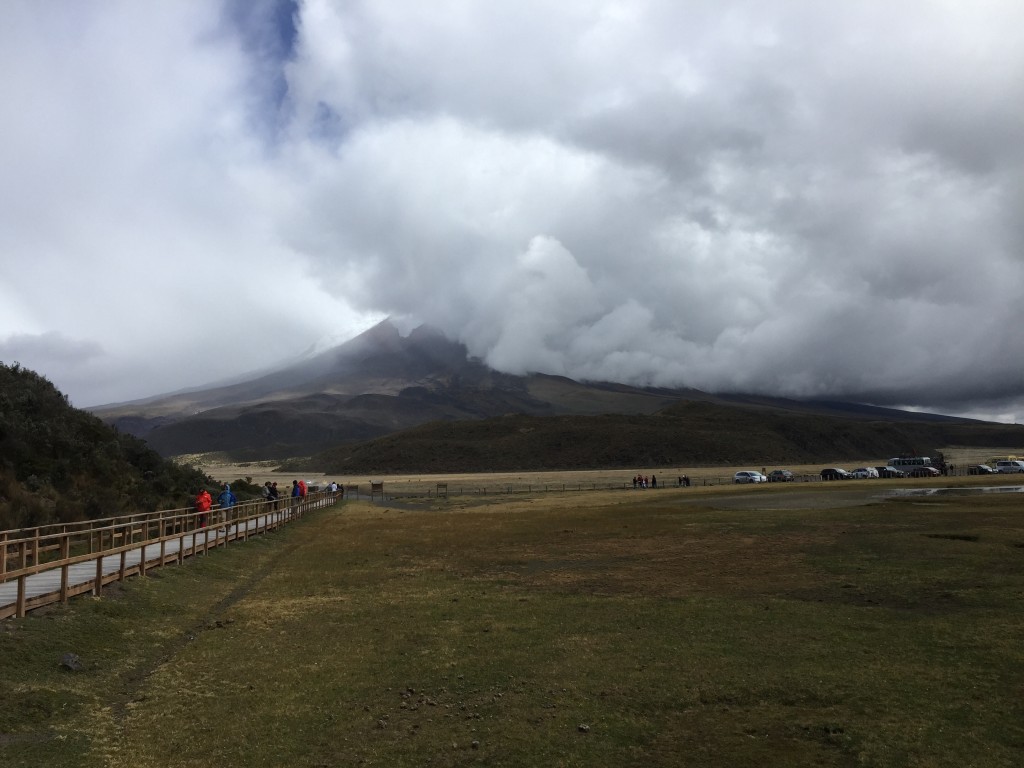 I was the last one to make it but at least I made it. One girl had to stop and get on the bus before she reached the finish line. The lagoon was cool, the day was cloudy, and I looked up at the mountain that I had climbed, happy that I came to Ecuador and ready for more adventures. 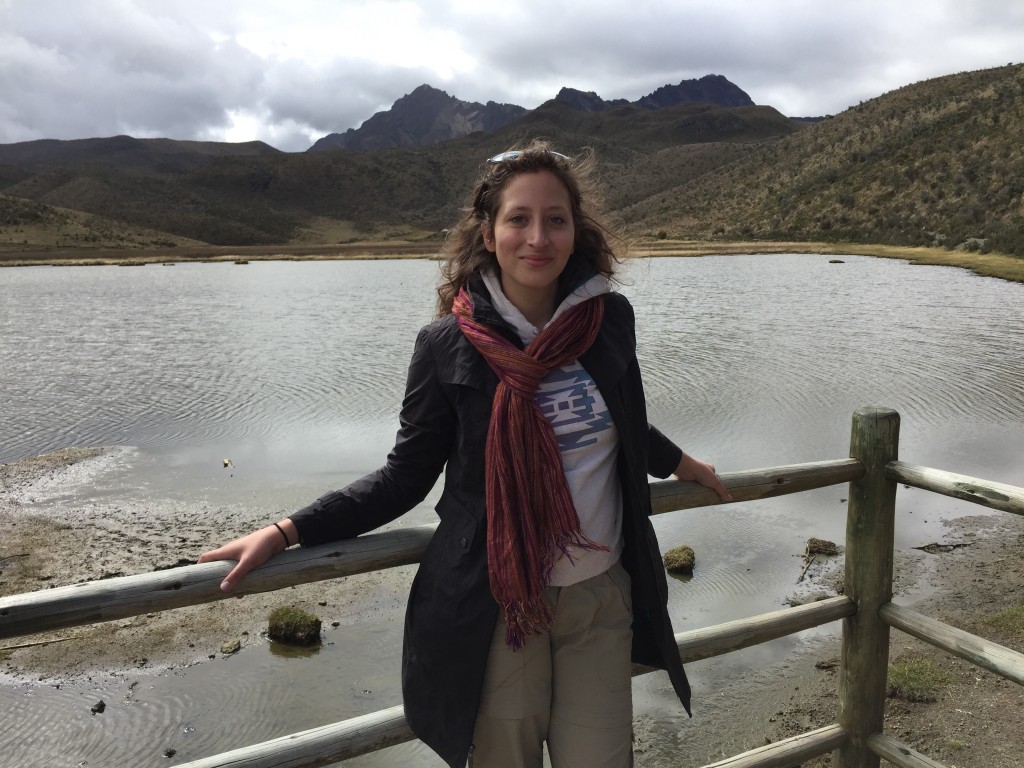 Check out Latin Adventure Tours based out of Quito on TripAdvisor!

2 Replies to “Cotopaxi: Neck of the Moon”