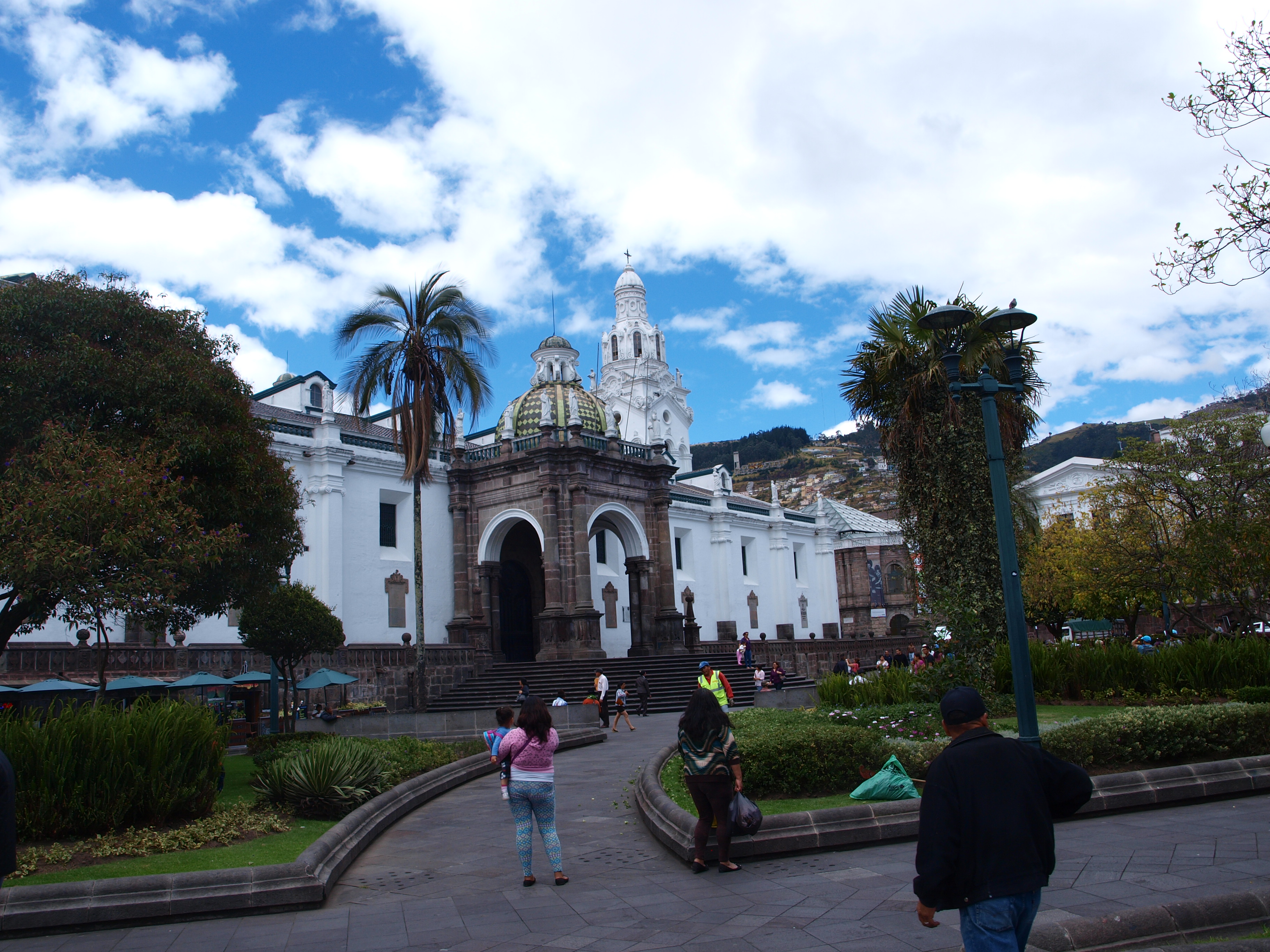 Quito, Ecuador had me thoroughly impressed and excited for the start of my journey.

The sun was making a mockery of my SPF 50 as I walked from my hostel, Minka Hostel, to a nearby hostel, Community Hostel, for a free walking tour. I squinted up at the buildings and mountains, alternating between taking photos on my digital camera (whose beautiful pictures you won’t see for some time because for some reason my ipad isn’t supporting my camera connection kit) and awkwardly studying my map, looking like the utter tourist that I am. I was wearing my hiking boots, some leggings and a black cami, wishing I had packed more appropriate city attire.The natives seemed not to notice or care, for which I was grateful.

When I reached Community Hostel’s reception, I instantly wished I had booked there. The hostel has two beautiful kitchens, two welcoming, if slightly unimaginative in decor, common rooms, and a calendar on the wall boasting community activities such as Oktoberfest, a food tour and “Twerking 101.” Most of the people in the walking tour group stayed at Community Hostel, and the guests and staff alike made me feel more than welcome.

First stop on the walking tour was the Mercado Central between Esmeraldas and Manabi. The two floor open market is home to traditional and inexpensive Ecuadorean cuisine, produce and flowers. Small ladies in hairnets waved at us tourists, inviting us to spend our money on their juice or tortillas or whatever they were selling. At our tour guide, Ovi’s, behest, we spent $1 on some of the tastiest fresh juice smoothie I have ever had. My favorites were jugo de mora (blackberry), naranjilla (no real English translation), and coconut. Ovi also described to us a delicious breakfast meal that I went back for that consists of a fried plantain tortilla mixture with scallions, two eggs and a cup of too-sweet coffee all for the unbelievable price of $1. I was falling in love with Quito already. The way to my heart is most definitely through my adventurous stomach.

After the market, which half of us promised to return to for lunch, we walked around the historical sites and churches. What stuck out most to me was the colorful colonial architecture. As I stood in the Plaza de la Independencia, or the Plaza Grande, listening to Ovi talk proudly about the heroes of the First Cry of Indepedence from Spanish monarchy on August 10, 1809, I marveled at the buildings whose very existence must represent Spanish oppression but which blend seamlessly with the culture in Quito regardless. Among the buildings in the square were the municipality building, the Archbishop’s Palace and the Hotel Plaza Grande, the presidential palace and the cathedral of Quito. During the day, the square is filled with old men sitting and enjoying the day, kids in school uniforms acting rowdy, and vendors sellings hats and coca tea leaves (I bought a hat for $2). At night, it is empty but for the strategic lights that illuminate the buildings, turning them from imposing to soft.

Other sites of the tour included the Sucre Theater and the surrounding square of vendors and street performers. We also went to the Church of the Society of Jesus, which stands out on the small side street, the outside decorated in the baroque style with an amazing attention to detail and an inside whose pillars and alters are covered with so much gold that it is said if they melted it down it would solve the country’s debt problem. We stopped at a “candy” shop, smelling of sugar coated and roasted nuts, fried plantains and other sweets. I bought plantains and a warm corn nut, pork rind, scallion mix. The final stop was a small shop where a man tediously hammers out beautifully sculpted metal items in the beautiful historic neighborhood of La Ronda.

La Ronda is said to be one of the oldest streets/barrios in Quito. Identical to many streets in Spain, La Ronda is long and narrow, flanked on both sides by colonial buildings, each brightly colored with flowers on almost every balcony. The area is home to bohemian and artsy culture, as it has been for centuries. Ovi said that poets and musicians used the balconies for serenades and people would come to watch, turning it into an even more happening spot. It was rather empty when we were there as a group, but Ovi promised us that it transforms on weekends, and I could see the potential. He then left us to our own devices, after thanking us graciously for tipping him. I left with a group of about seven others to head back to the market and eat a traditional meal called Corvina.

Whether you are in the mood for more jugo or want Ecuadorean tortillas (potatoes mashed and flattened slightly as they cook on the griddle) or feel like trying corvina, the market offers more than one stand of each type of cuisine to choose from. The natives spotted us instantly from behind their respective stoves, excitedly inviting us to dine with them. I went to a corvina stand that Ovi had said is famous, ordered and paid $4.50 for my meal in a confused state, not even sure what I’d be eating but excited by the prospect of something new, and was instructed to sit down and someone would bring me a tray. The second I sat down, I was almost accosted by women trying to sell me juice. I had gathered by that time that it is more common to drink juice with meals than water because the tap water is not safe in Ecuador (thank god I bought that filtration system). I sipped on jugo de coco as I watched someone (I didn’t have time to look up and see who) put a full tray in front of me, far too much for one person. Nevertheless I tucked in to what I realized was fried white fish, potatoes, yellow rice, salad and a side of soupy shrimp and mussel ceviche. It was my first real meal in Ecuador. Nothing could have made me happier in that moment.

**Check out the tripadvisor for the free walking tour

2 Replies to “My Intro to Quito”