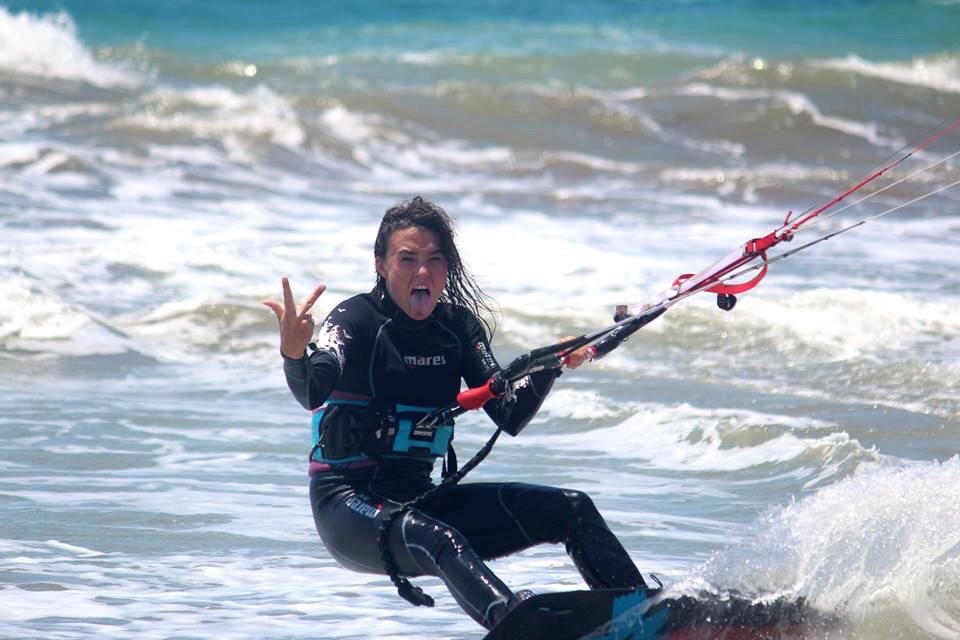 This young pro kite surfer and talented artist is living her life to the fullest!

The first time I walked into Ocean Freaks, the main kite school in Santa Mariantia, I was greeted by a petite white girl who immediately and enthusiastically asked me, “Are you here to kite?” I told her I hadn’t started my lessons yet, and she expressed her excitement that another girl would be joining her on the water. She even offered to teach me, “To see if I can even teach,” she said. “It would be a new challenge for me.” She said her name was Sam, and that she is a semi pro kite surfer who lives in Cabarete, Dominican Republic. She came to this beach for Fly Fest, a kite surfing competition that Ocean Freaks hosted a few weeks ago. Her sponsors, Star Kite, sent her, their only sponsored female, along with 10-15 other riders to compete.

“I don’t get a salary or anything, but they pay for my gear and my flights, so that’s pretty cool,” she said with a smile.

Using lots of big hand movements and in a loud, excited voice, she told me that she is also an artist who traded a painting with “this dude Pepe who’s kind of a babe” for the use of his house on the beach. Sam said that living there has been a good marketing promotion because people who follow her art are thrilled with the romantic idea of this young artist shacking up on a beach in Ecuador to paint and kite surf. 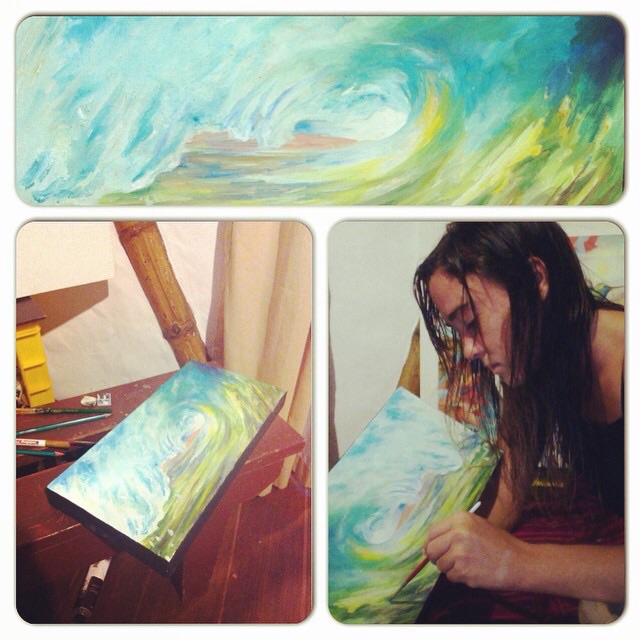 “Let’s be honest. There’s no money in this industry,” she said, looking at me through big black sunglasses as we sat among the hammock chairs at Donkey Den. “My surfing promotes and motivates a more organized professional life. I’ll sell a painting to cover a kite trip.”

Sam sells about a painting a week, which can range in price from $300 to $1000. She gets a lot of inspiration from the sport, and much of her work is based on her experiences on the water and images from her GoPro camera. Watching her on the water, it’s easy to understand how her actions translate to her beautiful, colorful paintings. You see her kite before you see her, a bright orange and green 9 meter Star Kite that she shares with Frainin (my instructor and Sam’s teammate). One second it’s at a slight angle, the next it descends sharply. There’s no denying that Sam is in control of the kite’s movements, doing tricks and dips, one hand ripping through the water as the other steers the kite.

Chilvers is a unique beach babe. You’ll find her walking back from the water, expertly pulling her kite with one hand and supporting her board with the other. Her brown hair with the hint of an hombre dye is constantly windswept, and her freckled cheeks are streaked pink with zinc to protect her from the sun. The dry clothes that she changes into usually consist of short jean shorts and colorful, tribal patterned sweaters and leggings. While she’s an obvious hottie (she’s even sponsored by Salt Water swimwear, a company that trades her bikinis for photos of her doing cool stuff in said bikinis), she expressed frustration with female riders who highlight their looks over their talent. It makes it more difficult for more serious female riders, like herself, to be taken seriously. 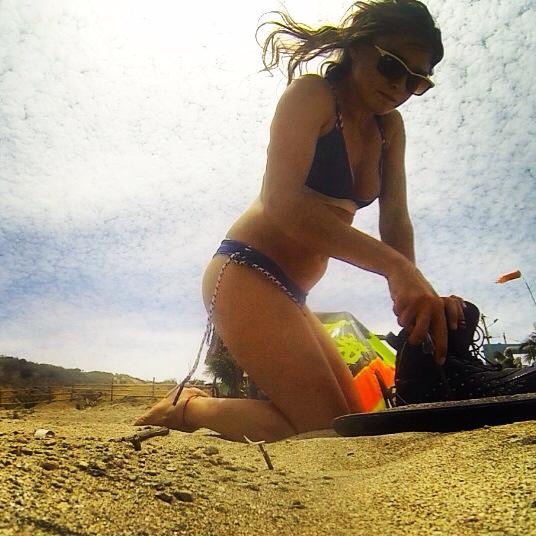 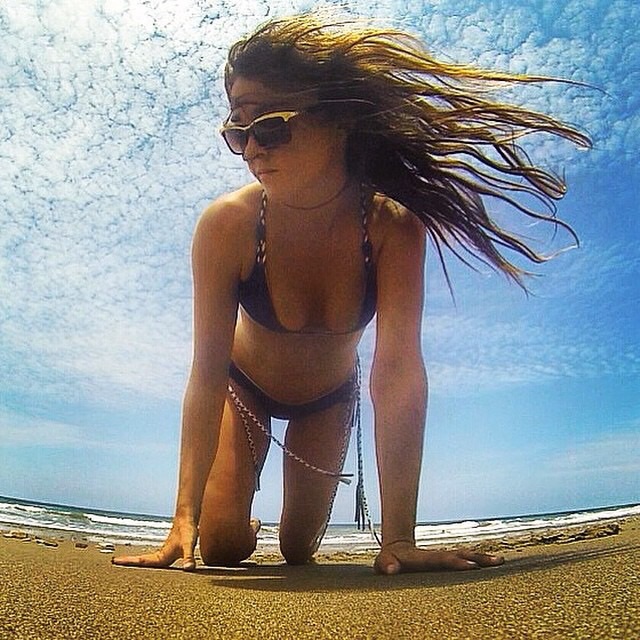 “At the end of the day, we do get the short end of the stick, but we only have ourselves to blame,” she said. “Girls tell themselves that they can’t ride like the boys, so they don’t try, or they’re scared of getting hurt. I want it to get to the point where guys and girls are all throwing tricks together.”

Sam said most people are really stoked to see a female rider, and would like to see more. She was one of the only girls to compete in Fly Fest, and since there wasn’t a category for females, she had to go up against the boys.

“I feel like I won for just showing up,” she said.

Most competitions don’t have a female rider category, so she’ll have to get used to competing with the big boys to fulfill her contract with Star Kite, who promised to send her to two to five PKRA (Professional Kiteboard Riders Association) events in the 2015 season, beginning with Panama and Morocco. But hey, maybe she’ll meet the love of her life. Sam has said that she doesn’t think she could be with someone who isn’t as obsessed with kite boarding as she is.

“He can be butt ugly, but if he can throw a handle pass…” she said, erupting in a girlish cackle. It doesn’t take much to make her laugh. “All I want is to date another pro-rider who can teach me tricks and bring my kite back when I crash.”

Of course, that’s not all she wants. Above all, she wants to progress as a rider, consistently landing all tricks in any conditions. Sam has stayed in Santa Marianita so long after Fly Fest because the riding conditions, like the wind and the current, are the exact opposite to those of in Cabarete. She often finds herself going back and practicing smaller tricks because the wind here forces her to challenge her weaker side. She feels that training in opposite conditions, versus Cabarete where the conditions are ideal for tricks, is essential to help prepare her for competitions in other countries where she is not familiar with the wind.

One trick that she’s dying to land is called an F16 Handle Pass. She described it, staring off into space as if she were picturing herself doing it not watching someone do it, as unhooking from the kite, then going into a back roll kite loop, and throwing a handle pass before you land. Sounds like cake. 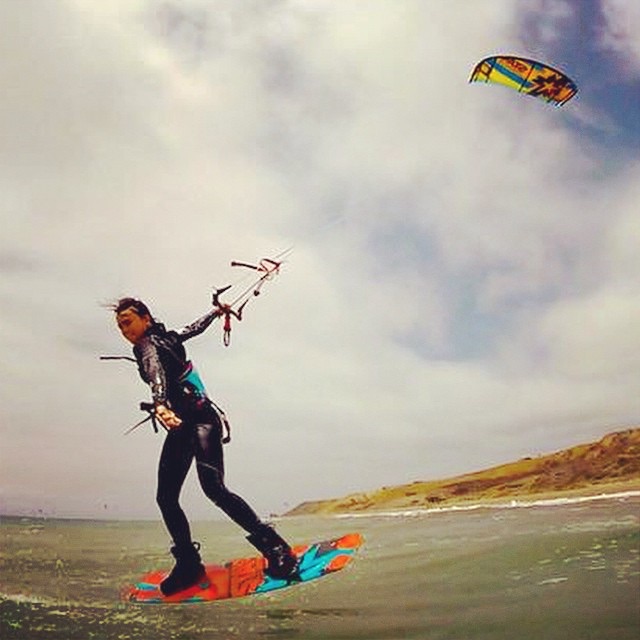 But Sam is confident in her abilities to tackle new tricks, despite her slow start to learn the sport three years ago. She had originally moved to DR to work on a series of art and took lessons because it was the thing to do.

“I sucked. I was the worst student ever. The kids on the beach were 100% confident that I would never stand up,” she said laughing at the memory. “I had never seen the ocean before, never been on a plane, and never heard of kiteboarding.”

Chilvers admits that she actually lied to her instructor at Dare 2 Fly about having nose problems when she had to put her face in the water because the foreign salt water was so brutal to her as a girl from the Ontario, Canada suburbs.

The murder of her dog, which she found with his neck broken in her front yard, was the catalyst for her deciding to truly learn the sport. In her depression, she turned to kitesurfing, physically and mentally exhausting herself to take her mind off her loss. Within a month, she was doing tricks, which she said came naturally to her because she would snowboard as a kid. When she started going out every day, and not just once or twice a week when the conditions were perfect, she progressed incredibly fast.

“I’m a very aggressive rider. I don’t have many physical fears in life,” she said.

Sam attributes her success rate with trying new tricks not only to her badass attitude, but also to her small physical stature and to yoga, which she says has changed her riding. When she started doing yoga, every morning at 8:15, she found that she got less riding injuries, and that she was able to build strength and flexibility while releasing muscle tension. Yoga is the perfect conditioning outside of actually practicing to kite surf because it isn’t too physically demanding and doesn’t leave her too tired to put her all into the sport.

Her dedication to progression is what allowed her to throw the trick that defines you as a professional. Sam said that 80% of riders, male and female, cannot throw a handle pass, which is when you pass the bar behind your back. Sam boasts that she is the only female rider in her part of the world to be able to have landed that trick, which is probably why Star Kite went for her.

She began her contract with the team on October 1 by going to Fly Fest and using Star Kite equipment. She chose them out of other big names because of the personal attention she received from them during their courtship. 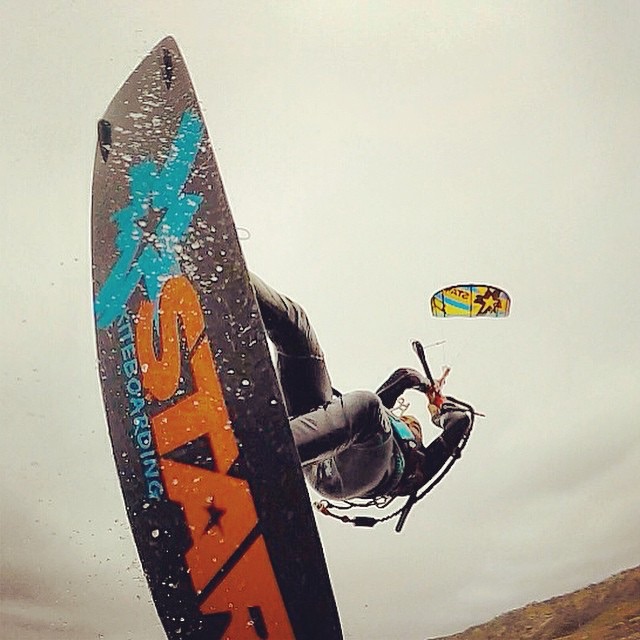 Since Sam is Star Kite’s only female rider, she hopes that she will be able to be more of a public figure in the Ocean Community. Her advice to new riders?

“Just practice. Take your time on the water and challenge yourself with little tricks. Every day you’ll progress a little more.”

Chilvers admits that there’s a slow learning curve at first, and a lot of people simply don’t have the time or the patience to learn. But you’ve got to crawl before you can walk.

“It’s all about being crazy enough to go for it.”

*All photo credit to Samanta Chilvers