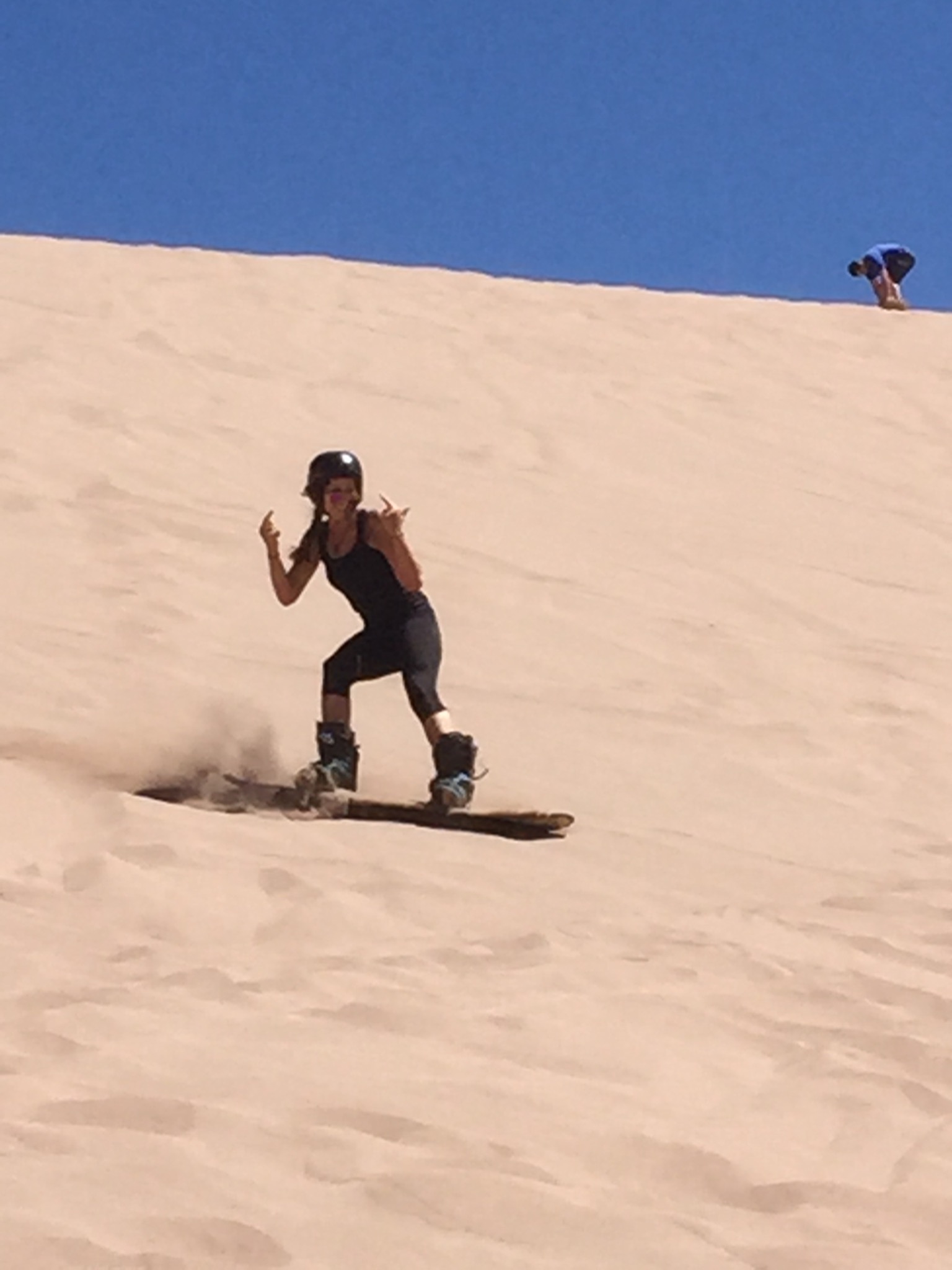 From Sandboarding in Death Valley to the Salt Marshes at the Salar de Atacama.

So, in my last post, San Pedro de Atacama: Part 1, we explored the Moon Valley, the Lagunas Cejas, and las Termas Puritamas. Here’s the rest. Enjoy.

There are many speculations as to how Death Valley got it’s name. Some say that it’s because there is no life there, but that’s not true because we passed a few bushes, foxes and falcons on the way. Some say that the area was a sacred place where shamans came to die. Our guide from San Pedro Sandboard told us that the real name came from hippie guides who came out to San Pedro to work in tourism and named it Death Valley to make it more commercial and attractive to visitors. Whatever the reason, it’s still pretty badass to say that you went sandboarding in Death Valley.

As our van rocked and swayed through the high rock walls and dodged giant pot holes, our guide explained that La Valle de la Muerte is similar to La Valle de la Luna in that it is a salt mountain range, which more or less means that it was molded by desert rain, wind and sun overtime to raise vertically, giving the region a unique natural sculpture with different colors due to a variety of minerals. (Shout out to my high school science teacher, Doc Rachell. If you’re reading, Doc, how’d that sound?) I tried to grasp the science behind the scenery while I kept an eye out for Tusken Raiders. 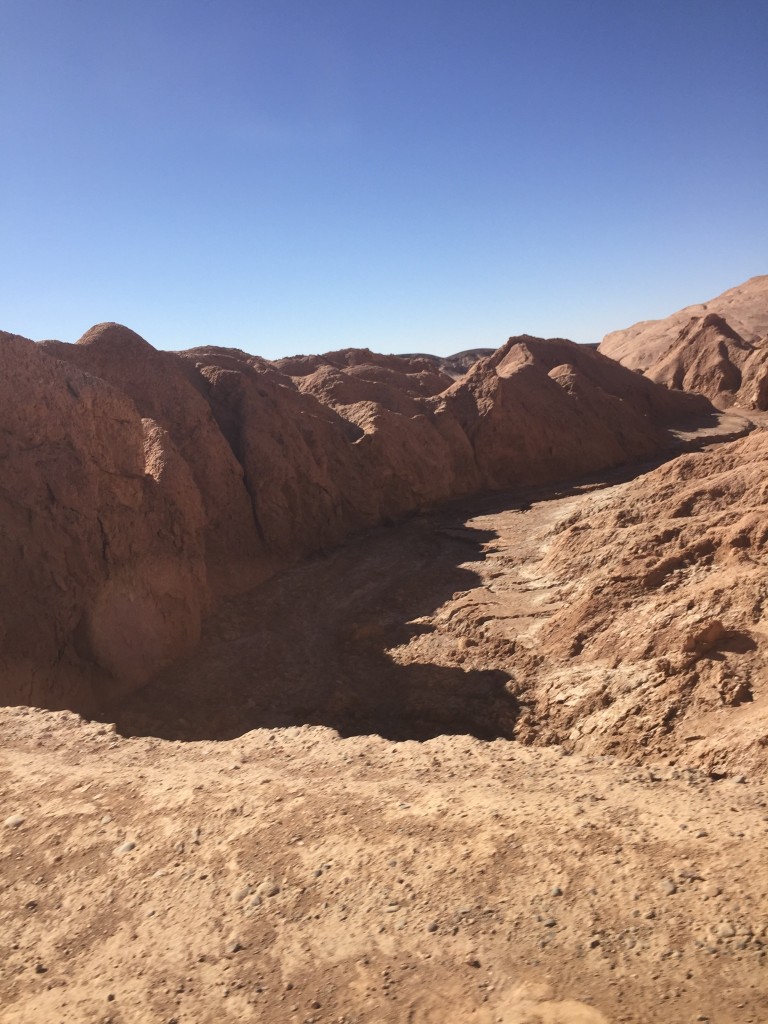 Our guide, a sun-and-wind wrinkled dreadlocked chainsmoker, turned up the deep-bass electro music as we pulled up to the bottom of the valley. We all stood sweating in the sand as he passed around ancient snowboarding boots that fit no one and pushed people who didn’t already know if they were goofy or regular to see which foot they instinctively landed on. 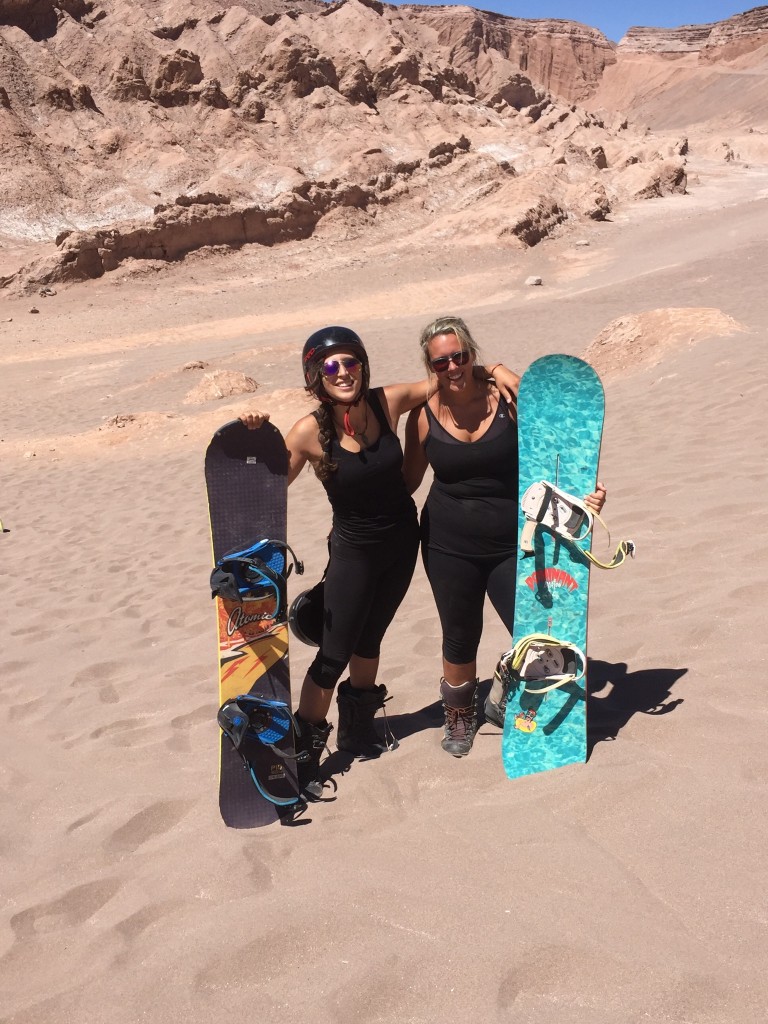 Once we all had a board, we trekked diagonally up the sand mountain, taking small steps to conserve energy. About fifteen of us lined the tip of the ridge and strapped ourselves into our boards as the guide dragged on a cigarette and explained how to ride. The thumping bass at the bottom of the hill was amping me up, and I tuned in and out of the guide’s speech. This was the same as snowboarding, I assumed, and I kind of knew how to do that. An eager German who was the first one to strap himself into his board went down the hill first. Everyone waited hesitantly when he made it to the bottom, reluctant to attempt the feat in front of everyone else. A cool Aussie with a wicked beard named Blake was the next one down.

I looked around again at the nervous tourists and decided I’d be the first girl to go. I jumped a bit to get some sand off my board and slid down. 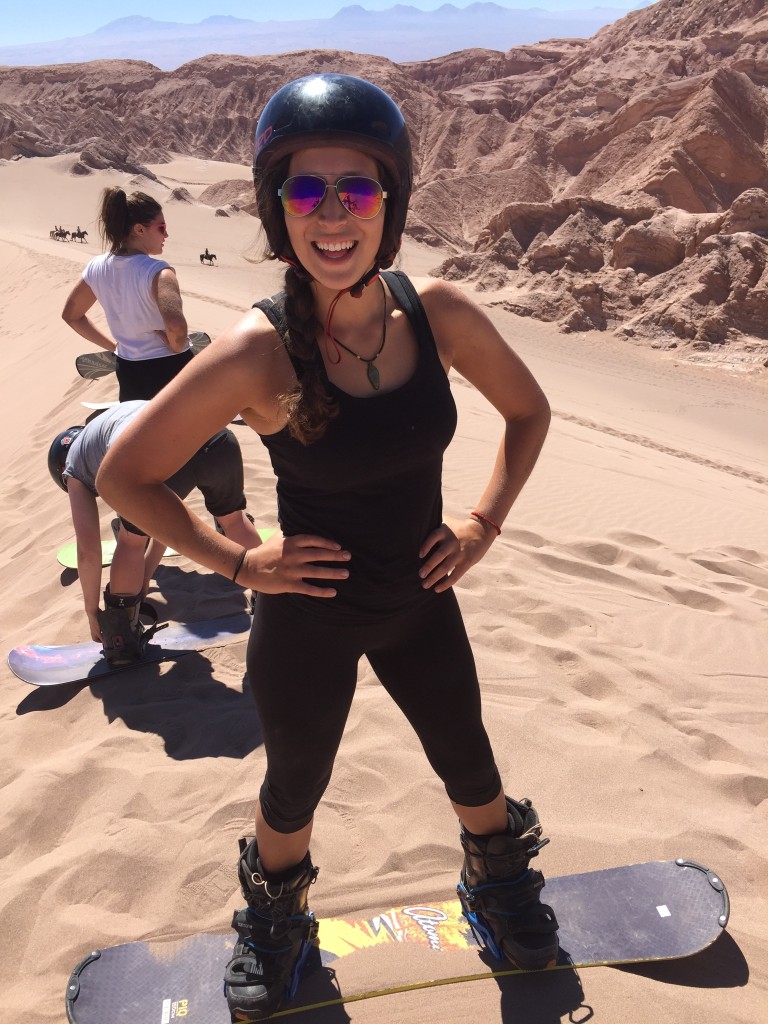 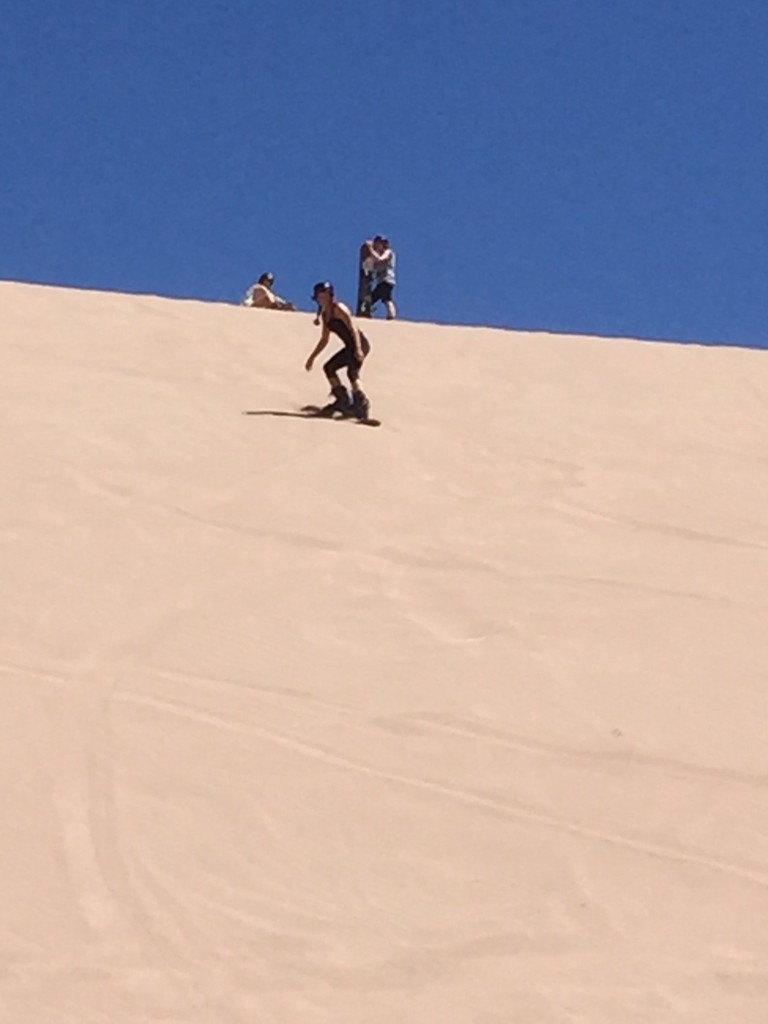 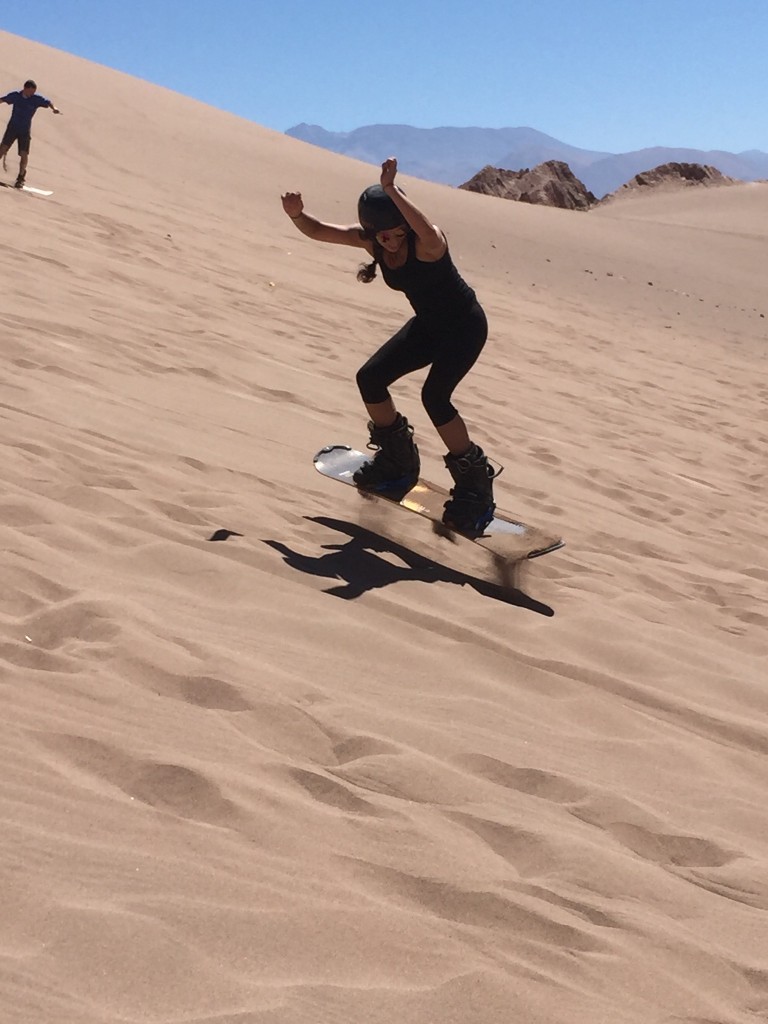 The first turn I tried to make, lifting my toes and leaning a bit on my heels, had me on my ass. The sand is much thicker and more resistant than snow, and the only way I could make it down fast and with any adrenaline rush was to point my board straight down and lean on my back leg, something I’d be terrified to do on a snowboard.

It was over as quickly as it began, and I stared up at the hill, reluctant to carry my board up it again. I made it up and down again three more times before I was too exhausted to continue. Walking in the sand is hard enough without the added stress of wearing heavy, uncomfortable board boots and carrying the board up. The people of San Pedro truly needed to invest in sand lifts. 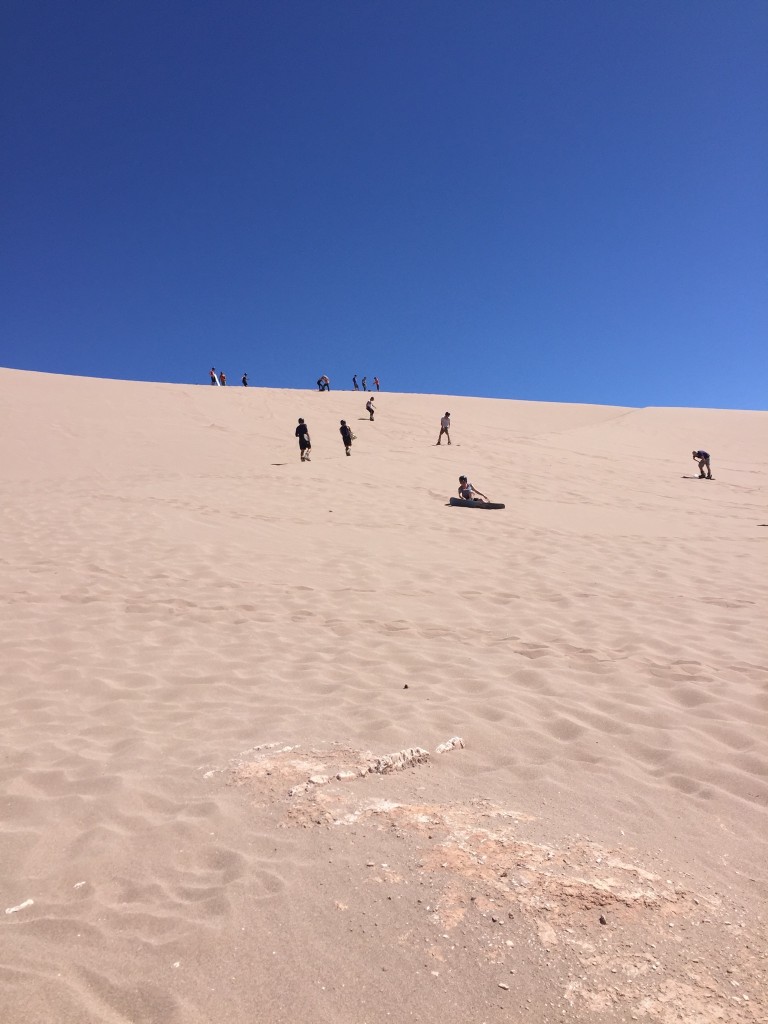 As you might have gathered thus far, it is nearly impossible to see any of the desert sights in San Pedro de Atacama without booking a tour. Or maybe I just didn’t try. Anyway, you catch yourself conversing with other tourists in your hostel or in a restaurant or just on the street because, let’s face it, San Pedro is literally made up of tourists and the people who serve them, saying things like, “We’re doing the Moon Valley tonight and the geysers tomorrow,” or “Nah, we’re not doing the salt marshes or the geysers because we just came from Uyuni and did all that in Bolivia,” or “Yeah, I have to book my Uyuni tour and buy a few rolls of toilet paper for it.” It almost makes you not want to participate. Almost. But I didn’t take an overnight bus all the way out to this uninhabitable desert to kick it at my hostel. I had already done the Moon Valley sunset tour, the bike ride to the Lagunas Cejas, the day at the hot springs, and sandboarding at Death Valley. The two big leftovers were the geyser field called El Tatio, which would have me up and at it in below freezing temperatures at 4 am, and the Salar de Atacama, at 7 am. The geysers, bursts of hot air and water shooting out of the ground, were obviously the cooler choice, but silly me I forgot my winter coat and I definitely forgot my will to wake up before the sun rose. So, salt marshes it was.

I have this annoying habit of booking tours without doing proper research about said tour. Maybe I should put a stop to this. My tour group of about thirteen people piled sleepily into a minivan. We stopped in the peaceful village of Toconao, known for some church of San Lucas, which is made of volcanic stone and adobe, causing it to be warm when the sun is out and cold at night, like a cold-blooded snake. The wood that makes up the ceiling is made of dried cactus, an aesthetically cool, light-colored wood. On the outside of the church are carvings of a llama and a donkey to signify the unification of Chile and Spain. Our tour guide, who conducted the tour in Spanish making me strain to listen before my first cup of Nescafe, talked about the four characteristic trees of the region and their respective uses, like making flour for bread or something. 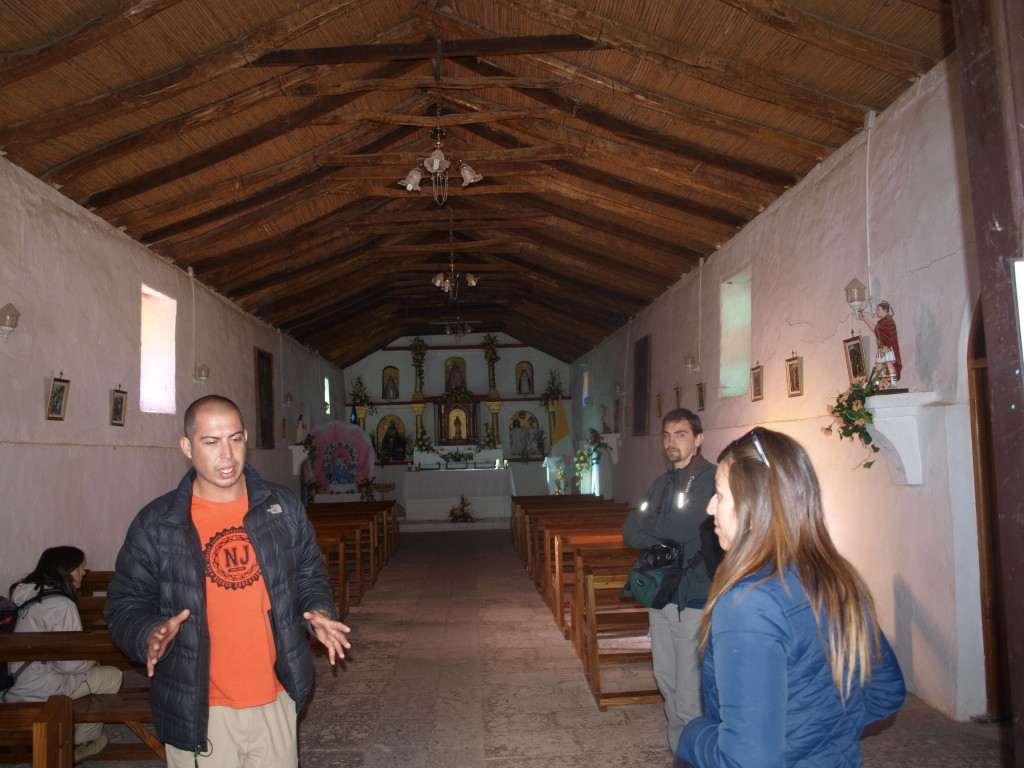 The town of Toconao boasts their hand made crafts. We stopped in one shop that sold Alpaca wool weavings, among other things. Their ancient loom sat in the back with the llamas, and as our guide fed the spunky animals hay, he explained that the people here don’t eat llamas, but they do eat llamos, the males. I thought that was OK. 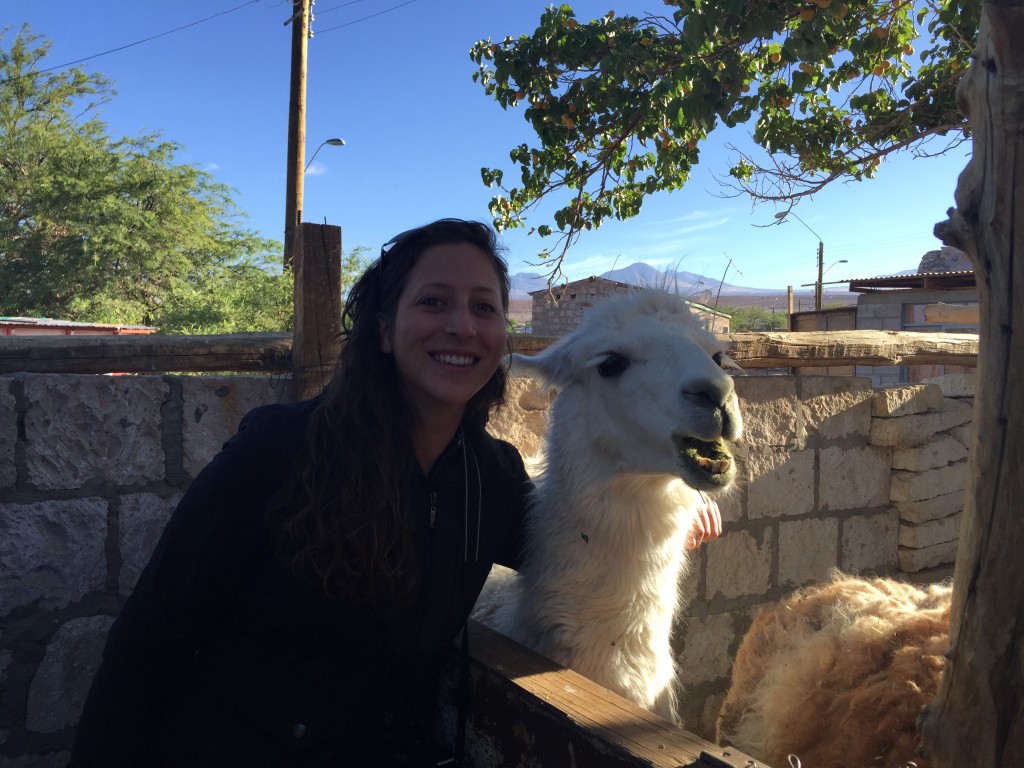 Toconao, meaning, “place of stones” in Kunza, the language of the Atacameno people, is made up of about 1000 inhabitants who mostly work in agriculture, cultivating potatoes and corn or making sweet wine and pisco.

After our short, but informative tour of the village, we settled back into the car and drove next to views of limitless desert. The air around the looming sand mountains was wispy in the distance. I would have thought it was fog if I didn’t know how arid this desert is, so I deduced that it must be a combination of sand in the wind and wisps of smoke from the active Lascar volcano.

Our first breathtaking stop in the Salar de Atacama was the Los Flamencos National Reserve, which is managed by the Atacameno community of Socaire, along with the National Forest Corporation. Not that this place was a forest, in any common sense of the word. The reserve itself covers 180,000 acres of desert. We stopped in the Soncor Sector and watched pink and black flamingos create a mirror image in the Chaxa lagoon, dipping their heads in the water and wriggling their long necks like snakes as they searched for tiny shrimps to eat. The three rather graceful species of flamingo that live here (James, Andino, and Chilean) spend twelve hours a day with their heads in the water, devouring 800 grams of shrimp a day. 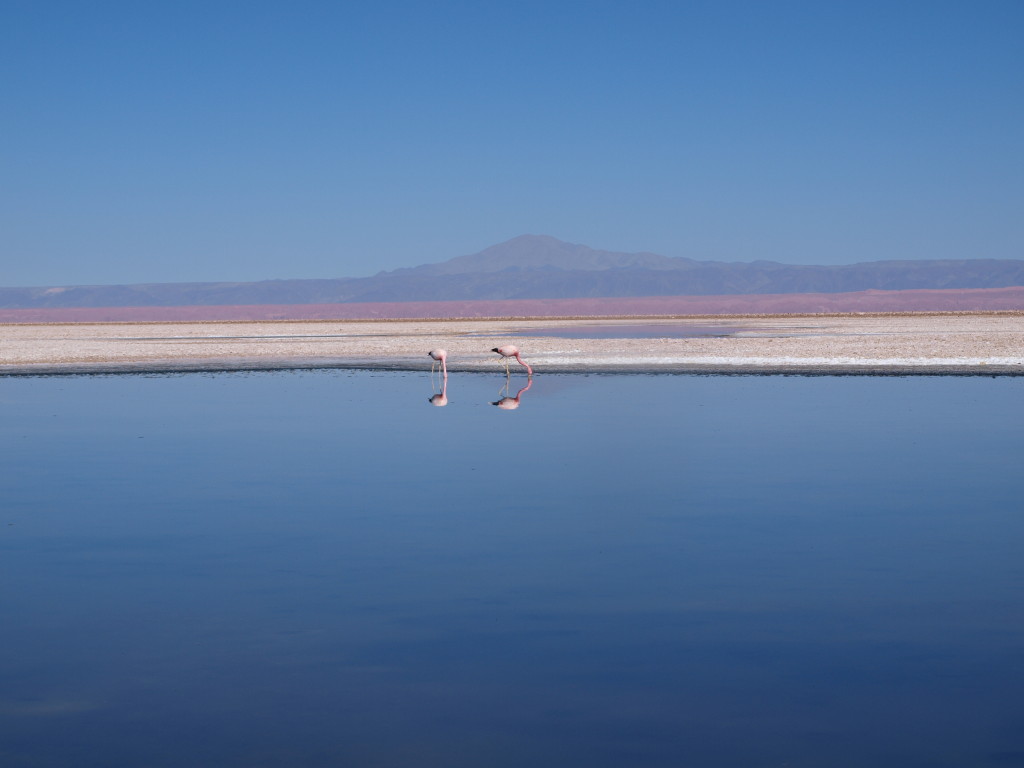 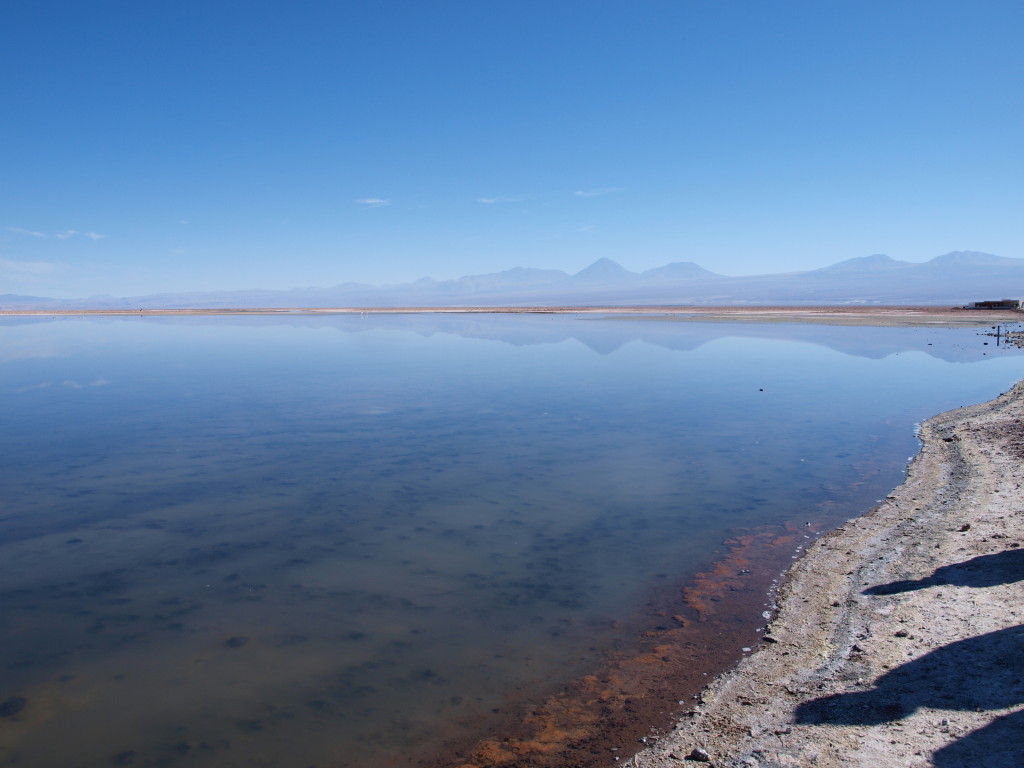 The salty pathways through the garden of white volcanic rock and salt crusts crunched and sparkled beneath my hiking boots. I didn’t know flamingos could fly, and was in awe to see their pink bellies soaring above my head and against the background of the valley of San Pedro and the five principal volcanoes surrounding the 100 kilometers of salt marshes, each one marking the border with Bolivia or Argentina. Dragonflies whizzed by my head and mated over the crusts of sulfur along the shores of the lake, giving them a yellow color and making the air smell like how I imagine Munchkinland smelled after the Wicked Witch threatened Glinda and then left in a huff. 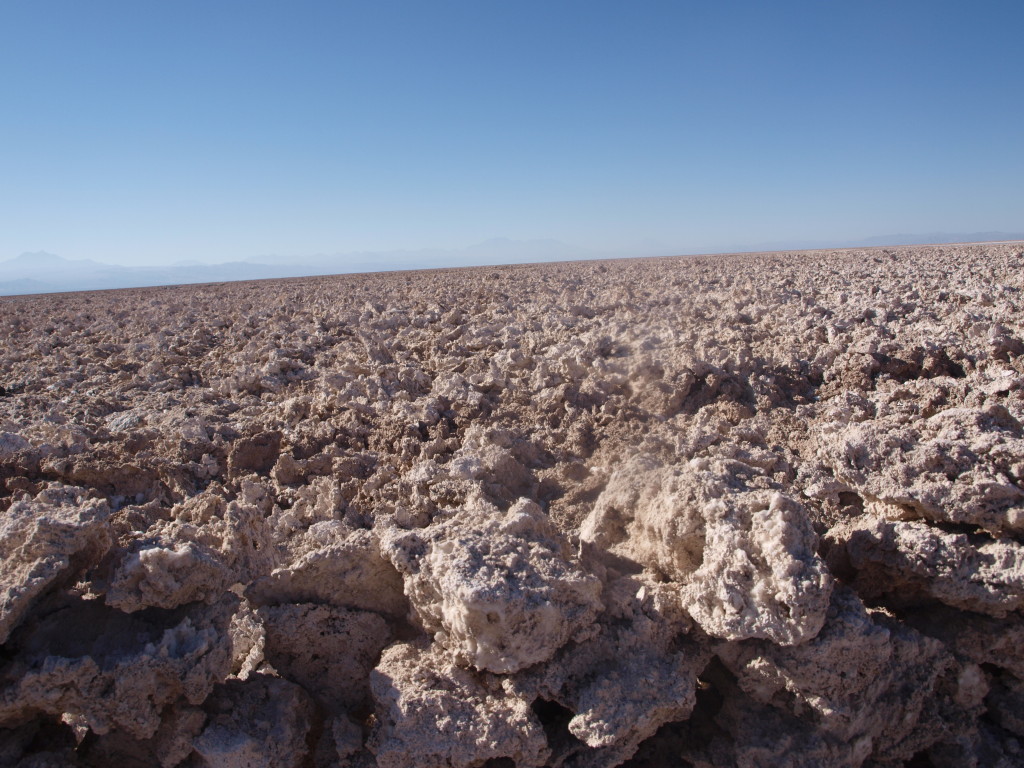 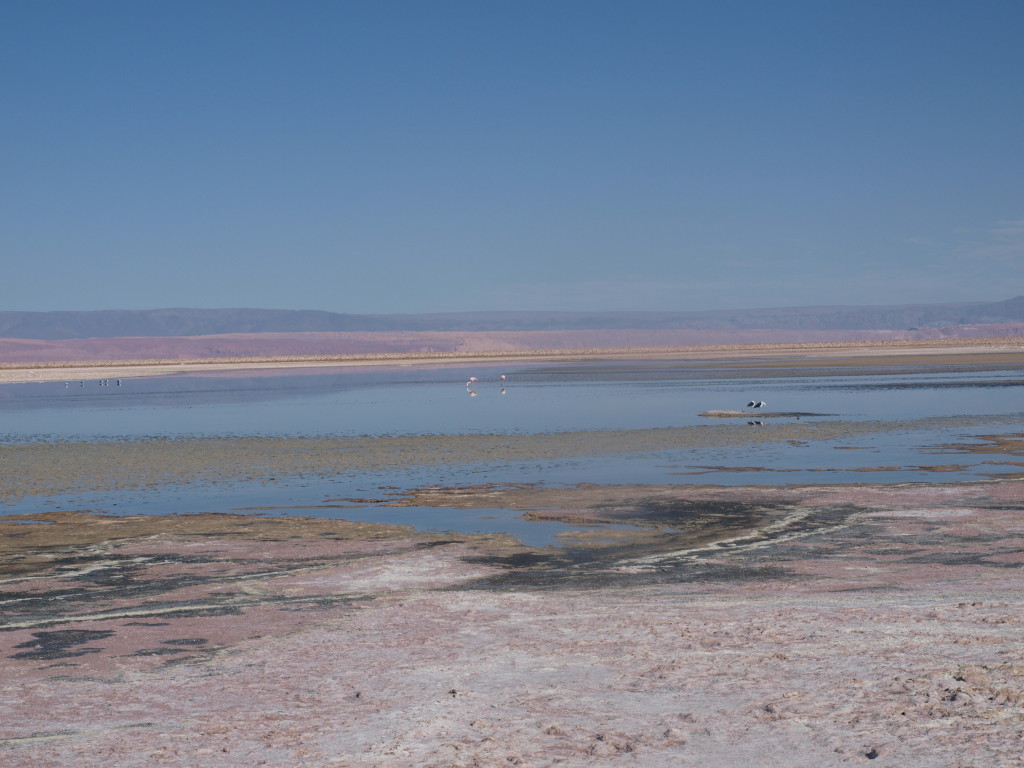 While at the reserve, our guide prepared us a lovely breakfast, complete with rolls, mashed avocado, scrambled eggs, cookies, coffee, tea and more. 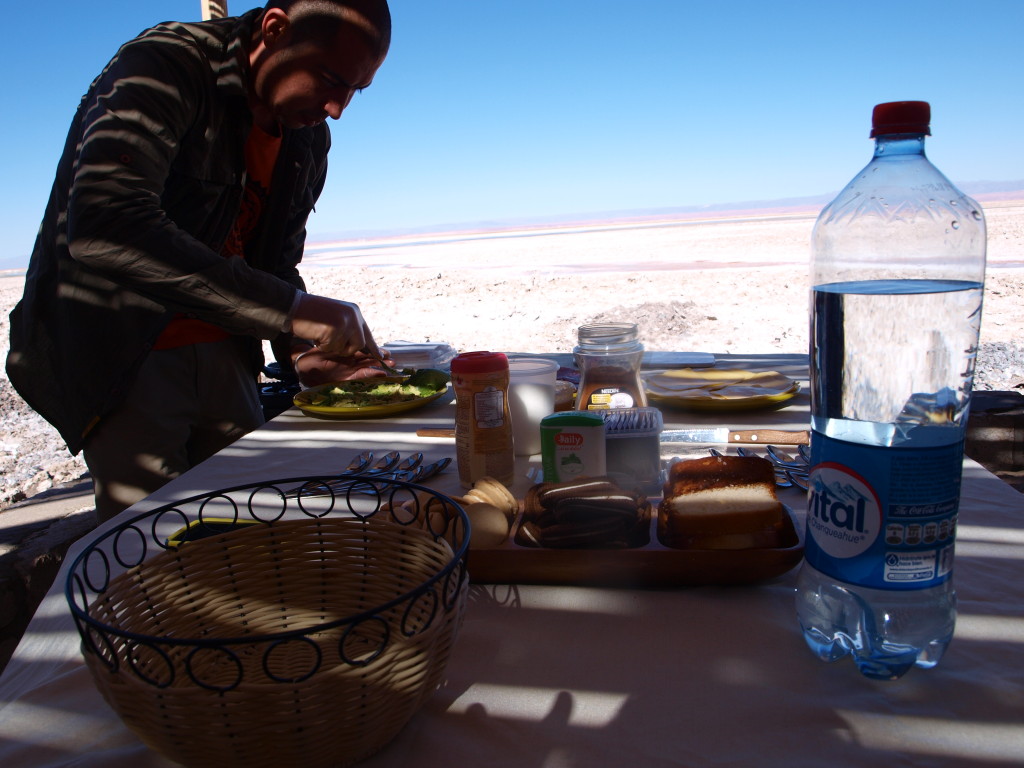 What would a tour in South America be without more churches? The purely tourist church of Bartolomeo de Socaire is made of adobe and stone and topped with a hay roof. It was whatever. The building was surrounded by crops of corn, alfalfa, green beans, sunflowers, potatoes, quinoa…yada yada. The town Socaire is the last town before Argentina and it is made up of a whopping 150 residents. Moving on… 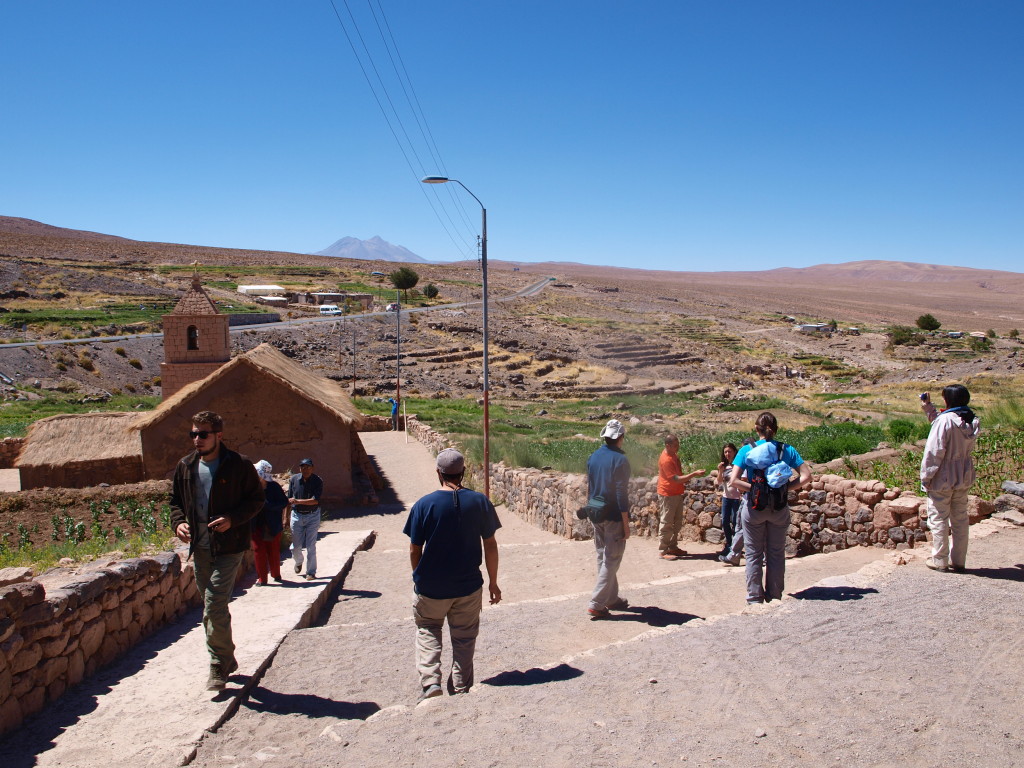 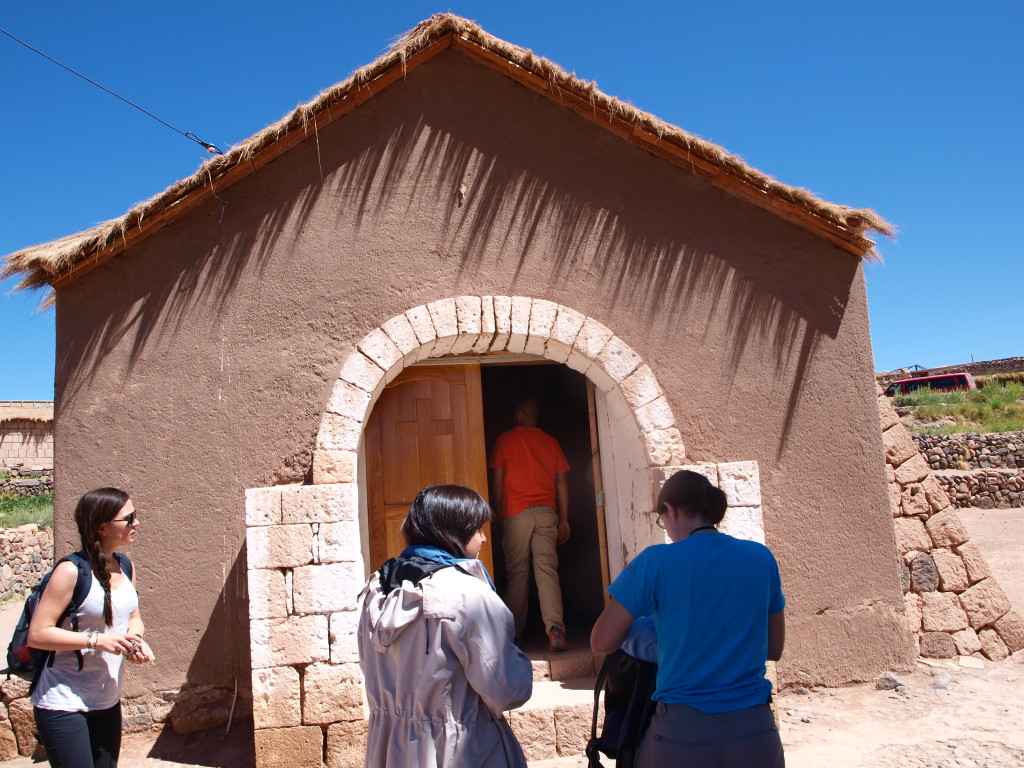 We drove on smooth, paved roads that wound rhythmically around the mountains and volcanoes and through fields of rocks and sturdy, yellow tufts of sun-stained grass called paja brava. If you squinted as you sped by the plains, you could trick yourself into looking at a field of poppies or sunflowers. 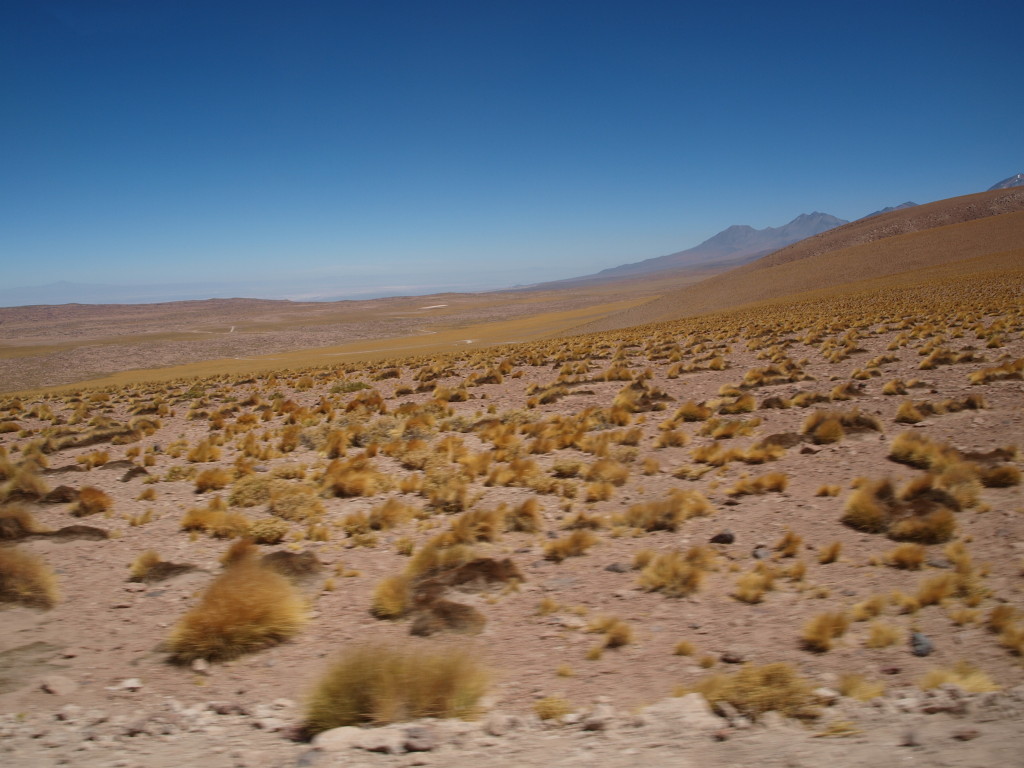 When we arrived at the Miscanti and Miniques lakes, spreading out before us like a couple of large sapphires, you could feel in your bones how fresh the air was at a 4000 meter altitude. The lakes aren’t fresh water, and bits of salt crusted along the perimeter of that royal blue lagoon. According to the guide, the lakes were formed thousands of years ago when the Miniques Volcano erupted and blocked the waters that ran freely from the high system of mountain ranges, damming the rivers and streams. The area around the lakes was empty of tourists. In their place were vicuñas munching on the yellow grass, a type of camelid that are so climatized to the cold, high weather that they can run up to 40 kilometers an hour. 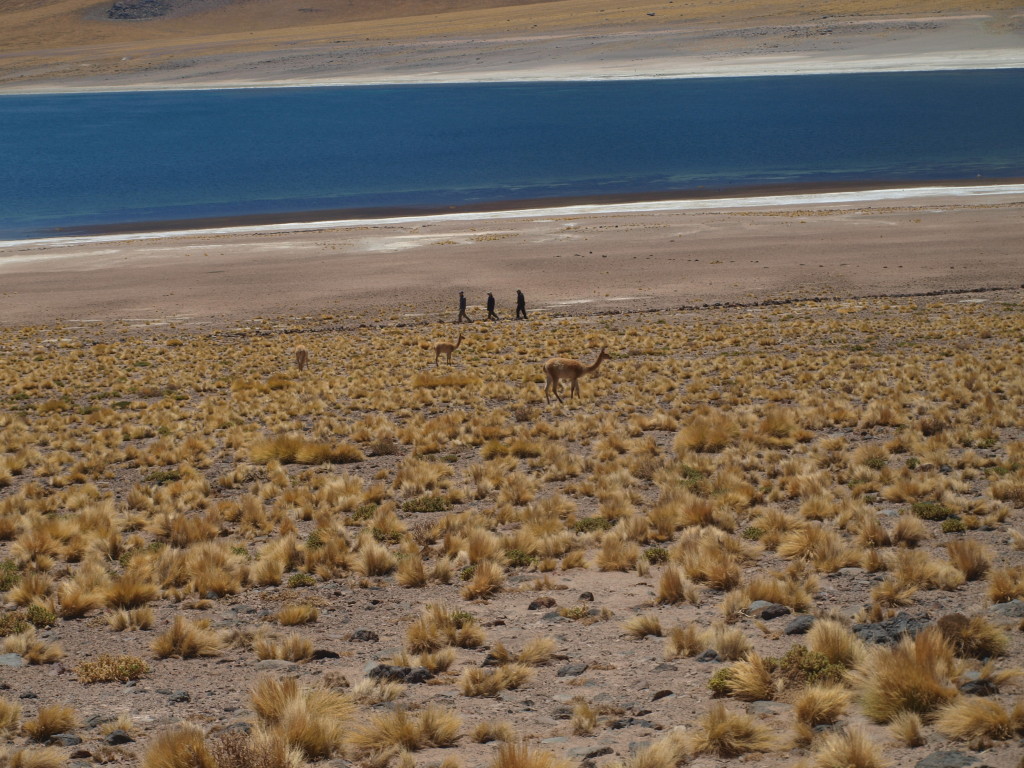 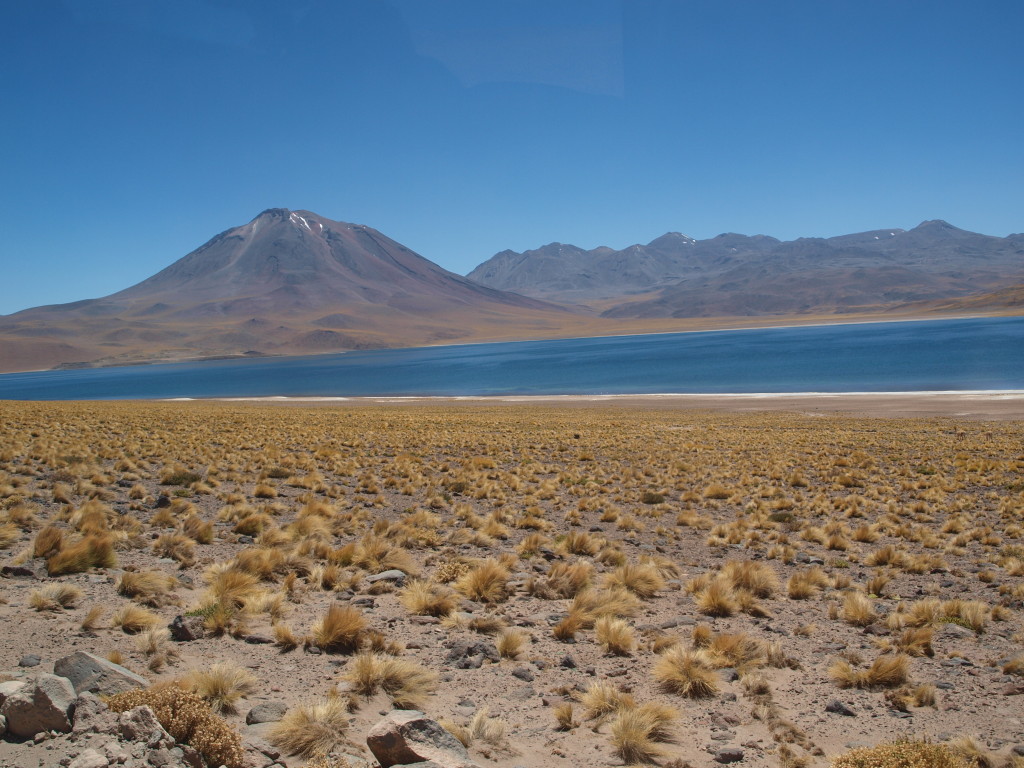 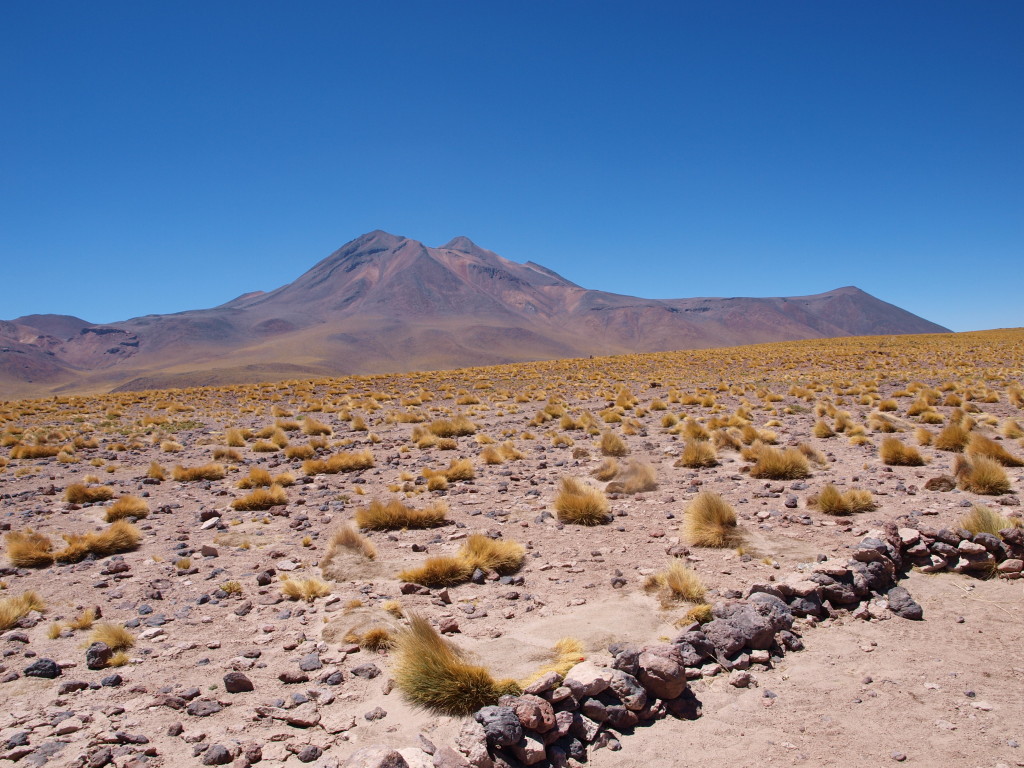 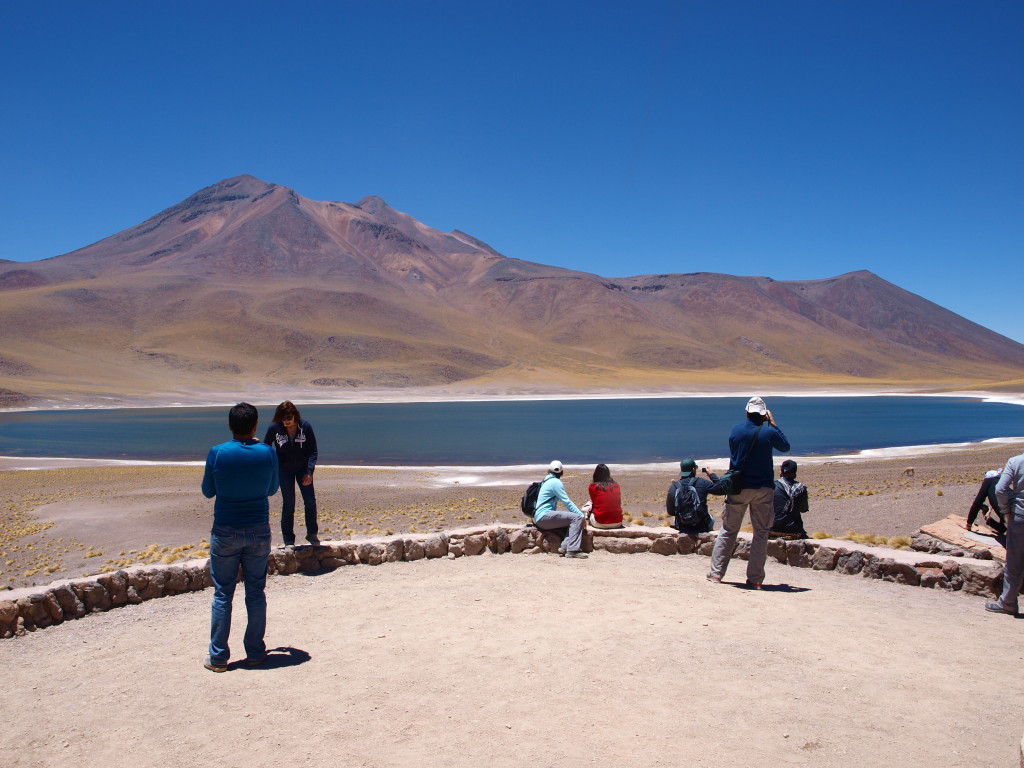 All in all, it was a very pretty tour. But like I said earlier, I wish someone had told me that it would just be pretty before I woke up at 6:30 in the morning.