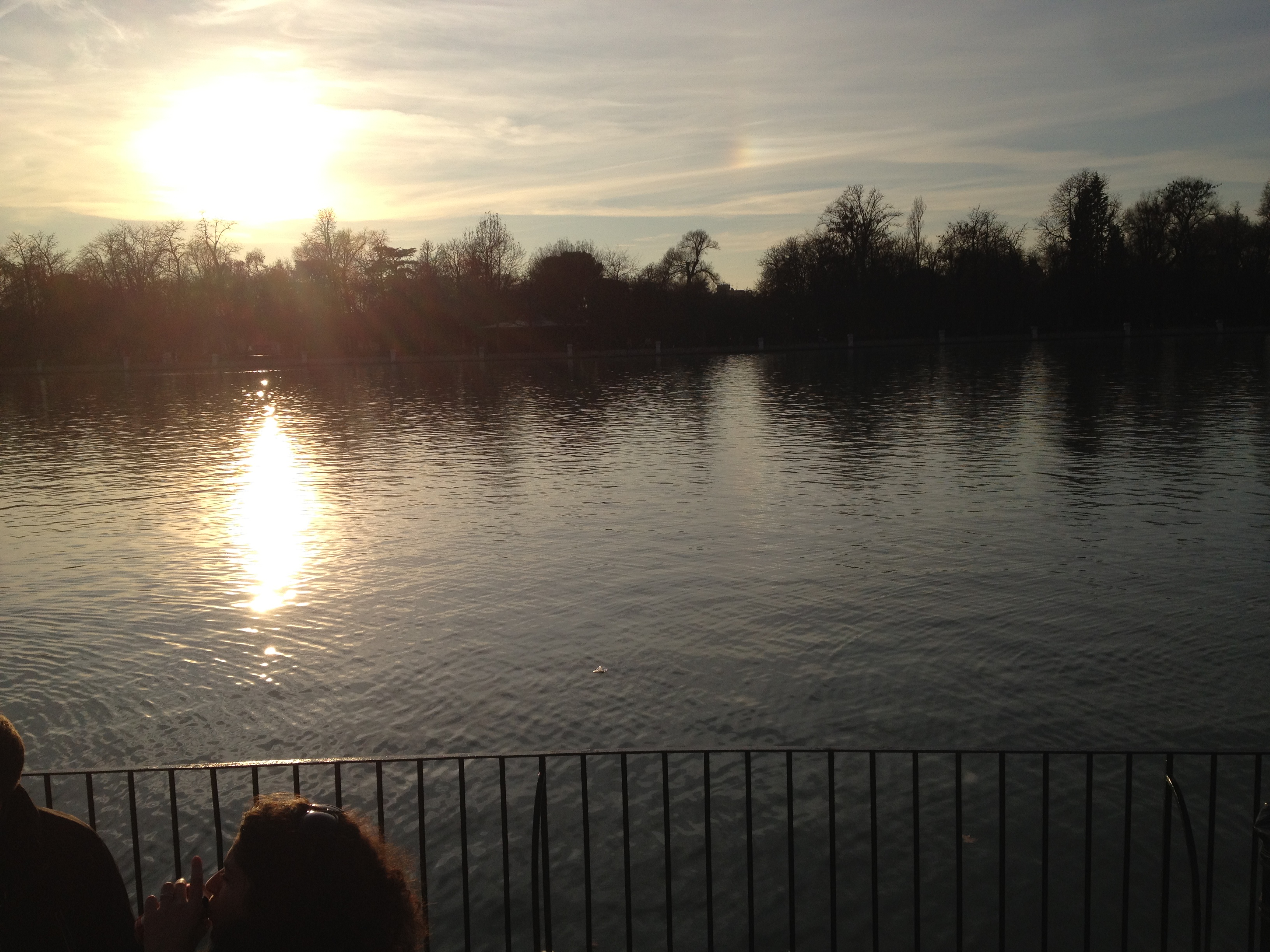 You’ve only got one day in Madrid, and you want to get the most of it.

Here’s a step by step guide of what to do with 24 hours in Madrid.

This is going to be hard. Not to gush, but there are just so many places I want to take you. For this reason I’m planning two one-day trips, and you can pick which one you want. Today’s guide is perfect for a Thursday. Both hypothetical trips will begin at 9 in the morning in May (best weather-warm but not yet scorching). We will be staying at in a 12-bed dorm in Way Hostel, a very down-to-earth convergence of fellow travelers. The youth scene at this hostel is so welcoming that you almost just want to hang out in the common room filled with couches and people watching TV or in the kitchen where travelers from all over the world are cooking up meals from their respective countries. The location is great, near the Tirso de Molina stop on the 1 train, and within walking distance to both the heart of the city (Puerta del Sol) and the seedy neighborhood Lavapies where lingering men will ask lingering people if they’re looking to buy some “chocolate” or at the very least, some Indian food.

The square around Tirso de Molina is filled with flower carts, sketchy characters, kids playing on the playground, and average bars that will serve you and two friends a plate of paella with your caña (small glass of draft beer) of Mahou. This plate of paella will be your tapa; see the first post for an explanation of tapas.

Most importantly is the small pastelería in the square (if you’ve just entered the public space from the hostel, it’s diagonally to your right) where you can buy a loaf of crusty white bread or a pan de chocolate for breakfast. Make sure to wash it down with a café con leche, i.e. the elixir of life in Spain. Don’t ask for an Americano. Also, you’re on vacation. Don’t ask for skim milk or fake sugars because that’s silly, and how do you even say that in Spanish?

El Parque del Buen Retiro is a great place to get lost in. I’ve spent hours there with my friends, walking on dirt paths rather than grass, due to Madrid’s drought, accepting sprigs of rosemary from old ladies, finding little hidden statues or pieces of art that look like they’ve been there for a thousand years.

Depending on where you start at the park, it’s probably not too far from some museums. I suggest you visit the Reina Sofia because that’s where you’ll find works by Picasso and Dalí, but if you want to check out el Prado and its long halls of classic Spanish portraits and works by artists like El Greco and Velázquez, the two aren’t very far from each other.

After all this walking around and stuff, you must be culturally pooped and hungry. Treat yourself to a metro ride, because el metro vuela, to Gran Via where you’ll walk just a few blocks to your lunch destination of El Tigre. (There are two in Madrid. You’re going to the one at Calle de las Infantas, 30, just a short walk from the metro stop).

El Tigre is semi-touristy, but with good reason. I suggested going for lunch instead of its busiest time of dinner because being there for dinner is just kind of gross. It’s so packed that you’ll never find a table, the air is moist with the heat of bodies packed together, and if by some miracle you find a seat, it will most certainly be covered in spilt beer and old plates that the waiter won’t bus. At around 4pm, however, El Tigre is a totally different place. You will find a quiet, clean table and a waiter will politely bring you a giant cup of your choice of beer, sangria or mojito for only five euros (as opposed to 6 euros at night). Each giant cup comes with a well-packed plate of tapas. Go with two other people and you’ll be graced with a plate of paella, a plate of tostas with jamon and tortilla, and a plate of patatas bravas.

After you’ve had your fill it’s time to walk it off again. Find that metro at Gran Via, you know, the one near that McDonald’s that looks like a castle? In front of you you’ll see a wide pathway with shops on either side, slowly declining. You’re on Calle Montera. Follow it. Don’t make eyes with the prostitutes. The Spanish kids running around with their parents certainly don’t seem to mind their presence. 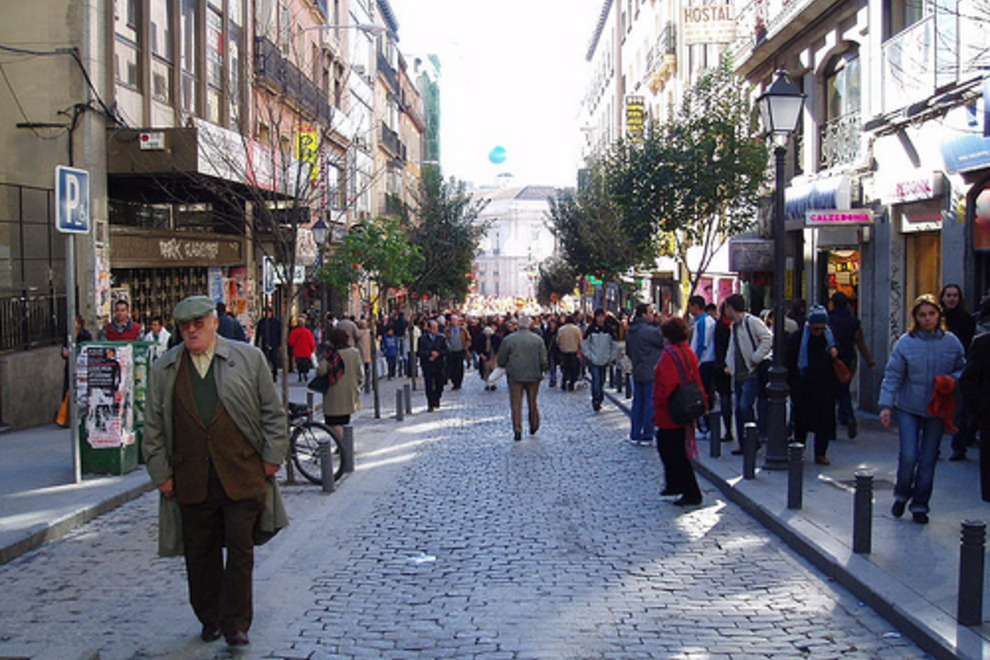 This path of hookers and cheap clothing/shoe stores and weird pizza places that serve olive-topped, rectangular slices will eventually open up at the nexus of the city, Puerta del Sol. Get acquainted with this spot while the sun is still out because you will be returning at night, but don’t stray too far from the path that the Gran Via hill has laid out for you. Continue to the other side of the circle that will soon be filled with young people drinking hard liquor and cans of Mahou. Follow that decline until you reach Calle de las Carteras (“Street of the Wallets”- watch yours as you pull it our repeatedly to buy things that you don’t need on this street), which will take you to another inviting space with a surplus of cafes and restaurants that meets with Calle de Atocha. There’s a very fancy Haagen Daaz here attached to a theatre, which has always served me as an impressive landmark.

If you have a second and want to throw in a little more site seeing, pop a right at Calle de Atocha and walk down for a few blocks until you see an archway. That archway leads to el Plaza Mayor and it’s a cool spot with a lot of expensive tourist-trap restaurants but also one or two places that sell bocadillos de calamares for two euros.

Are you over this big, beautiful square? Me too. It’s a nice place to hang and people-watch, but I think it’s time for a siesta. Make your way back to the intersection of Calle de Atocha and Calle de las Carteras. Walk past the theatre and Cine Ideal and onto Calle del Doctor Cortezo, and keep going down. Once you’ve hit my favorite Chino (it says “Alimentacion” and “Hiper Bazar” on the awning) you know you’re close to Tirso de Molina. Thank goodness! Something you recognize. Go take a nap and recharge your batteries because we aren’t even close to being done with the night. Before you knock out, make sure to make a reservation at Arroceria Gala on Calle de Moratín 22, and ask to sit in the garden, for 10pm. No, that’s not too late to eat dinner. Spoiler alert, you’ll be up until 8am anyway.

Arroceria Gala is the perfect restaurant to be served big portions of paella in the pallera (pan). It is a classy family place amid endless tapas bars on Calle de Moratín, offering a quiet and pleasant dinner of savory saffron rice underneath the glass, greenhouse ceiling covered with plants and flowers. I completely understand, however, if you’d rather not spend money or engage in a fancy sit down dinner. Like I said, the neighborhood is flush with other places to fill your stomach. If you wanted to go back to Sol and find a place to fuel for the night in its margins, I could work with that, too. Food is food and it’s all good en el barrio. Besides, it’s Thursday night, Madrid’s Friday, and it’s time to take a page out of the European book of getting drunk.

By now you should be well rested and looking fine (remember my tips, ladies, wear wedge heels!). After dinner, it’s time to engage in botellón, which is basically Spanish street pregaming. Good spots for this include, but are not limited to, Tribunal (for the punks), Atocha (for the Americans), Alonso Martinez (for the bars), Chueca (for the gays), and of course, Puerta del Sol (for everybody). We’re heading to Sol because it’s just something you have to do. Stop at the aforementioned chino or Alimentación for some alcohol. My personal favorite is a bottle of gin and a bottle of Fanta Limón (ginevra y fanta, por favor), but I’ve seen some kids get a liter of Coke and mix it with a bottle of one euro red wine (vino tinto) to make some gross sangria. Whichever way you choose to drink, the convenience store will also sell you plastic cups so you have a vessel in which to pour your beverage. Post up near a fountain or wherever there aren’t too many cops and enjoy drinking and watching other people drink. Buy a can of Mahou off the guy selling them for a euro. Just remember to pace yourself. This isn’t the land of funneling beers and shot for shot. This is the land of the slow drinker who maintains his or her buzz consistently throughout the night without getting sloppy. That’s why their clubs are open until 6am and ours are only open until 2am.

The reason I say we should drink in Sol is because there are a lot of promoters there who speak all kinds of languages and who will get you into their respective clubs for free or at a reduced cost, and some even offer you a free drink. My friends and I would usually hold out for Moondance, a small, but fun, lounge that plays a hilarious mix of European techno, Rihanna, some Spice Girls or Backstreet Boys, and crap like David Guetta, or Joy Eslava, a bigger, badder club that is shaped like a theatre, all the sweaty, alcohol-induced dancers taking up every space of the sphere.

Some other touristy clubs are Kapital and Pachá, but I didn’t have much fun at either. Kapital is cool because each of its seven floors has a different theme and on the bottom floor, the largest dance floor, there is some random, crazy arctic blast of cold air that dries the sweat right off your neck before you produce some more. However, it’s absolutely filled with Americans and other douche bags, so that’s no fun. Pachá is somewhat similar in size and clientele, and both charge way too much at the door, 18 euro if memory serves.

You’re best bet is Joy, and with a name like that, who wouldn’t want to go? Even if a promoter doesn’t hook you up, the line’s never too long and it’s always a good time. You should be heading over there around 1-1:30 am. So go ahead and dance your face off and make your liver cry. After all, you’re only here for a few more hours. Plan to stay there until 5:30. It will close at 6, when the metro reopens, but it will still be very dark out. If you’re hungry, and really how could you not be, the Chocolatería San Ginés is open and right next door. Have some churros con chocolate while you check out your messy self in the mirrors that line the walls and laugh because you’ve truly had one crazy night. 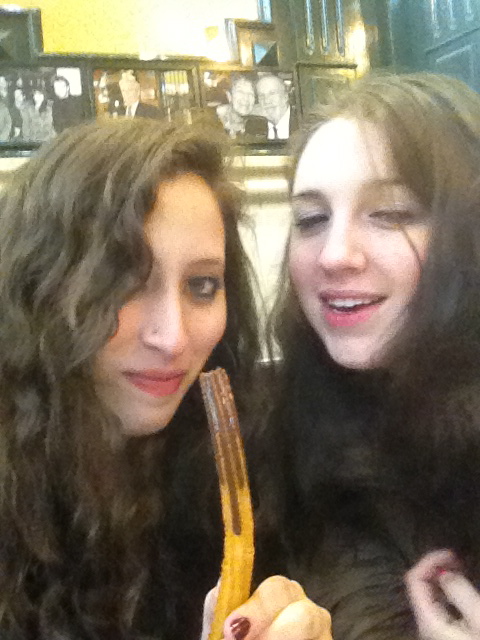 Keep an eye out for Part 2, A Day in Madrid on a Sunday, my other favorite day in this lively city!