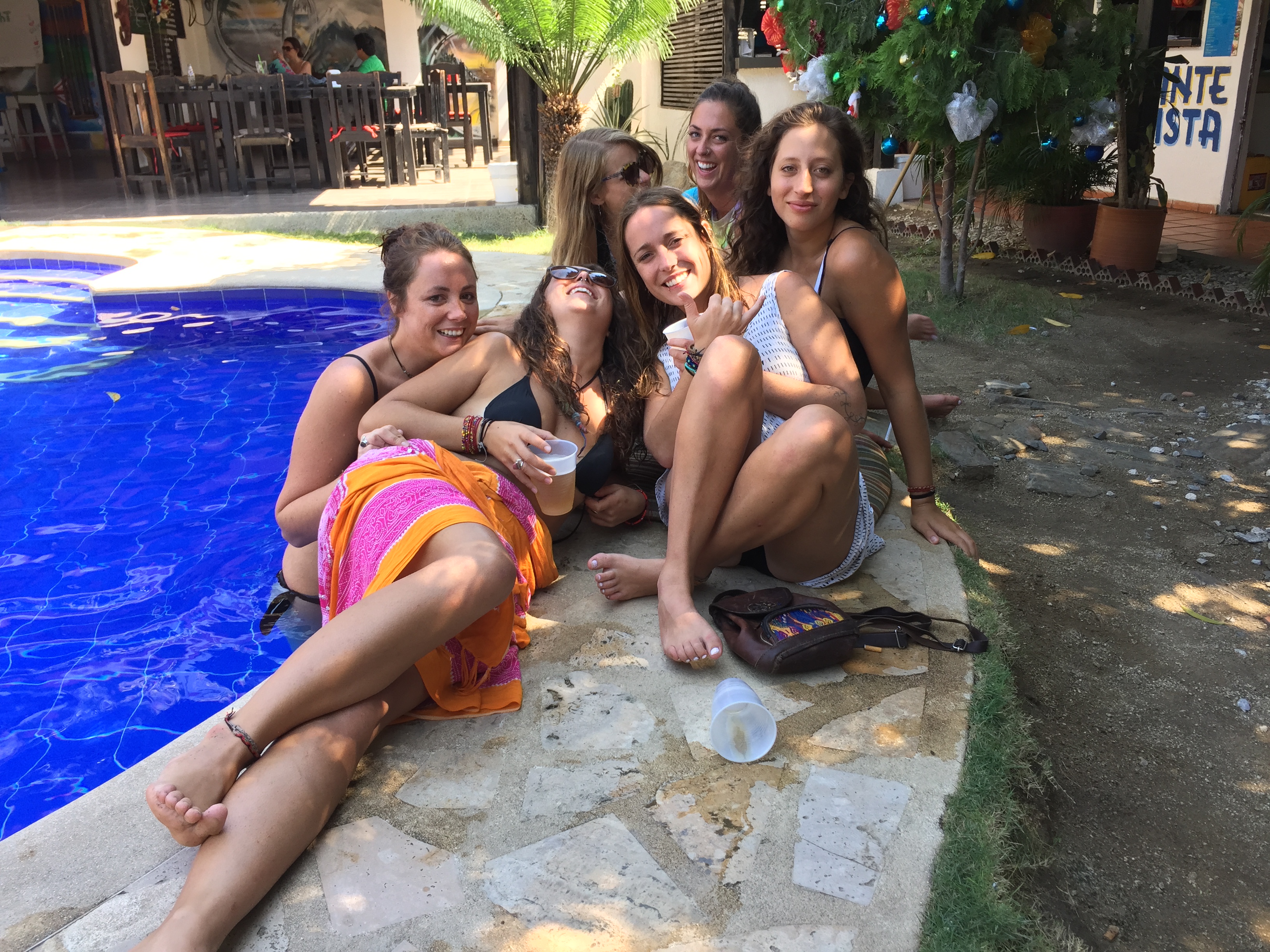 The people you meet traveling are half the fun.

I loved having the chance to make lasting friendships with a great group of Australian girls in Colombia.

I was sitting in the courtyard of my Cartagena hostel, el Viajero, sweating through my yoga pants, when the baddest girls I ever met caught my attention. There were five of them holding grocery bags, the thin blonde in front donning some kind of a grim reaper marijuana t-shirt. I remember wondering how these apparent backpackers had the means to be rocking cute outfits and makeup, whereas I only packed comfy staples and some tinted lip balm.

Later that day, I ran into the girls again in the hostel’s subpar kitchen while we made our respective dinners. I admired the way they all chipped in together, comparing their collective process to the countless times I had single-handedly prepared meals for my culinary-challenged friends. They were unexpectedly kind in offering me up their knives to use to cut up my red pepper and onion and were even more surprisingly friendly when I interrupted their meal to ask for a lighter to light the stove. As I handed the lighter back, I looked at the blonde one and said, “I like your shirt. If you’re ever in need, let me know.” I smiled and walked away, happy that I had already found a connect and wasn’t offering up an empty promise, and satisfied that they looked at me with hope rather than disgust.

I didn’t see the girls again until I was heading out to smoke a joint around the corner from the hostel. The tallest one with the most piercing blue eyes, Greer, was walking back to her room where I could hear the other girls howling with laughter. We acknowledged each other, she looking graceful in an Amazonian way in her long skirt that I soon found out were a staple of hers. I showed her the joint and asked if she’d like to come along, to which she happily agreed.

“You wanna invite your bitches?” I asked, hoping she wouldn’t be offended that I called them bitches. She didn’t flinch.

“Nah, they’ll just smoke all your stuff,” she replied.

I don’t remember what we talked about while we passed the joint back and forth, but I remember that she was easy to talk to. Long story short, the rest of her crew welcomed me into their group so seamlessly, I wondered how I hadn’t met them before or why I couldn’t find a group of girlfriends this laidback in the states. The last few nights we spent in Cartagena, lounging on chairs in the courtyard and chatting, I was astonished by how sweet and giving these girls were to each other. There was no cattiness, no jealousy. Just a few bad bitches having a good time, and I was honored to be one of them for the time being.

There was Katarina, or Kat, with curly brown hair and a septum piercing. Hanging with her was like being near a reiki masseuse; she somehow could always read and adapt to your energy, and she really took the time to make sure her friends knew they were loved and at peace. Greer, whom I mentioned prior, is nicknamed Groel, which is perfect for her if you’ve ever met her. She’s tall and a force to be reckoned with, and I’ve never seen such a small waist consume so much food and beer. Leah, whom they call Wrecky because she’s always wrecked (not really though), is the blonde with the grim reaper marijuana shirt. She’s thin and beautiful with bright blue eyes and the best Australian accent I’ve ever heard, and she’s always quick to dole out compliments. Julia, or Jules, is sweet, thoughtful and affectionate. She’s the type of person who goes with the flow and seems to never lose her temper, and you know you’re being taken care of when you’re in her company. Elise, or Leisy, is Jules’s sister, a fact what no one had to tell me- I could tell just from noticing their many identical gestures and mannerisms. Leisy’s got a raspy voice and a husky laugh and she is all heart. When I had to leave the girls in paradise to fly back home, Leisy carried my bags to the bus and hugged me about a million times before we finally said goodbye.

Since we had all planned to make Santa Marta the next stop after Cartagena, the girls excitedly and genuinely invited me to join them. I was skeptical of the easiness with which they included me at first, but it was all in my head. We ended up at the most beautiful hostel, the Dreamers, in the city that doesn’t offer much but a stopping ground to the rest of the coast, Parque Tayrona, and the Sierra Nevadas. 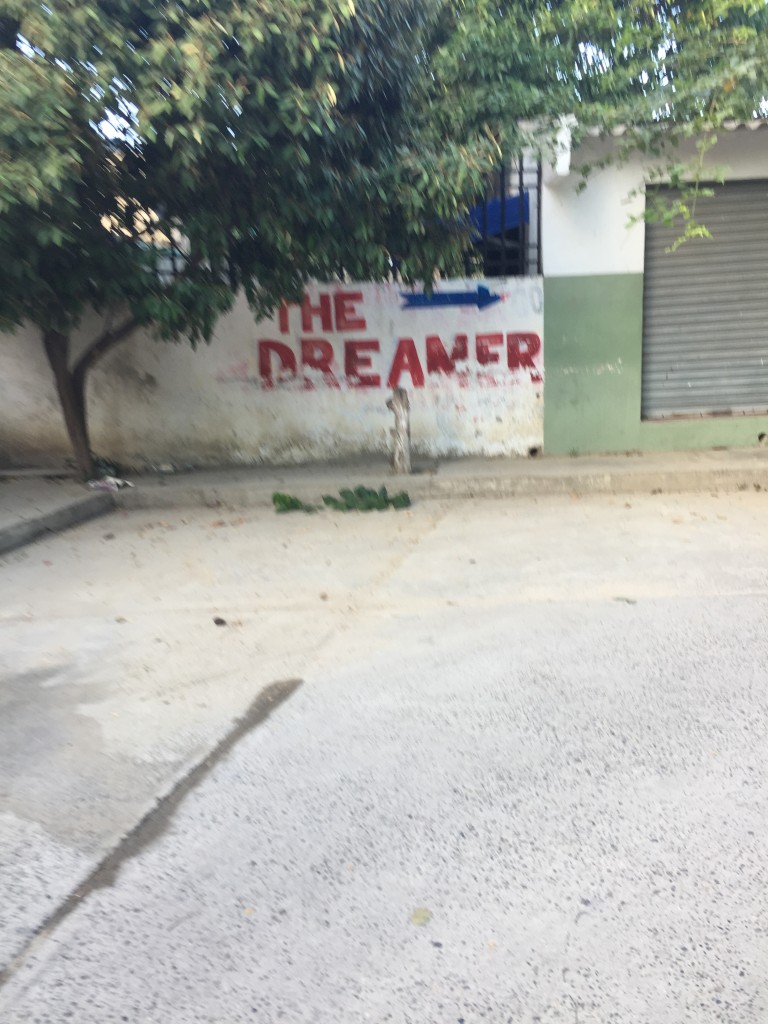 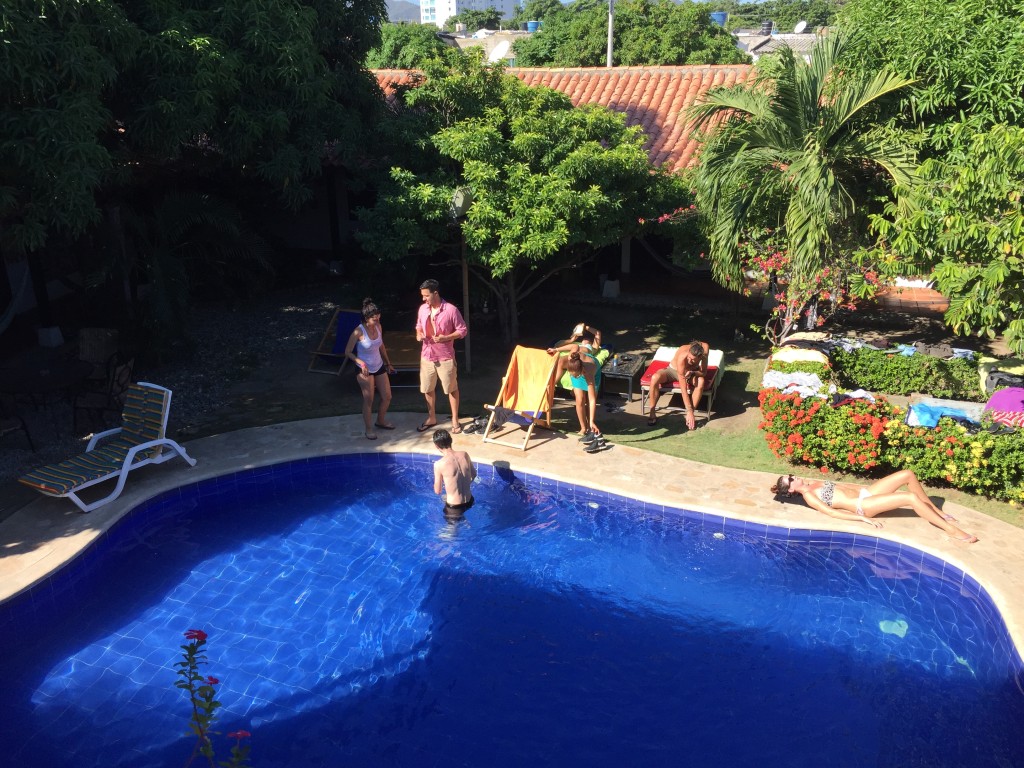 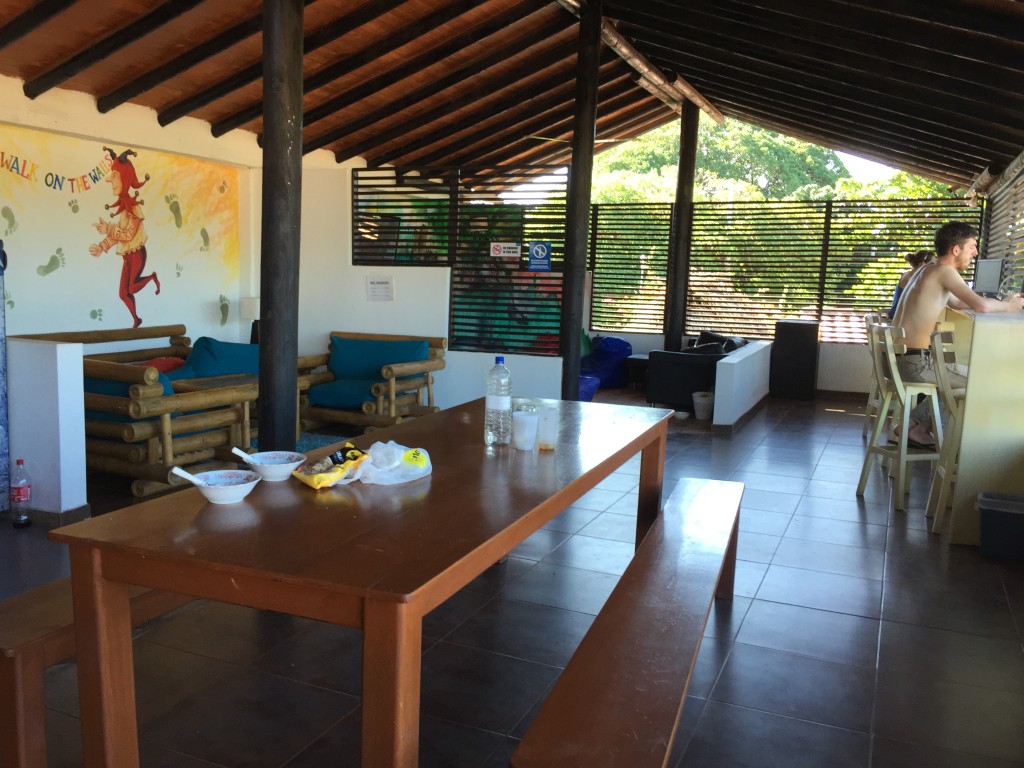 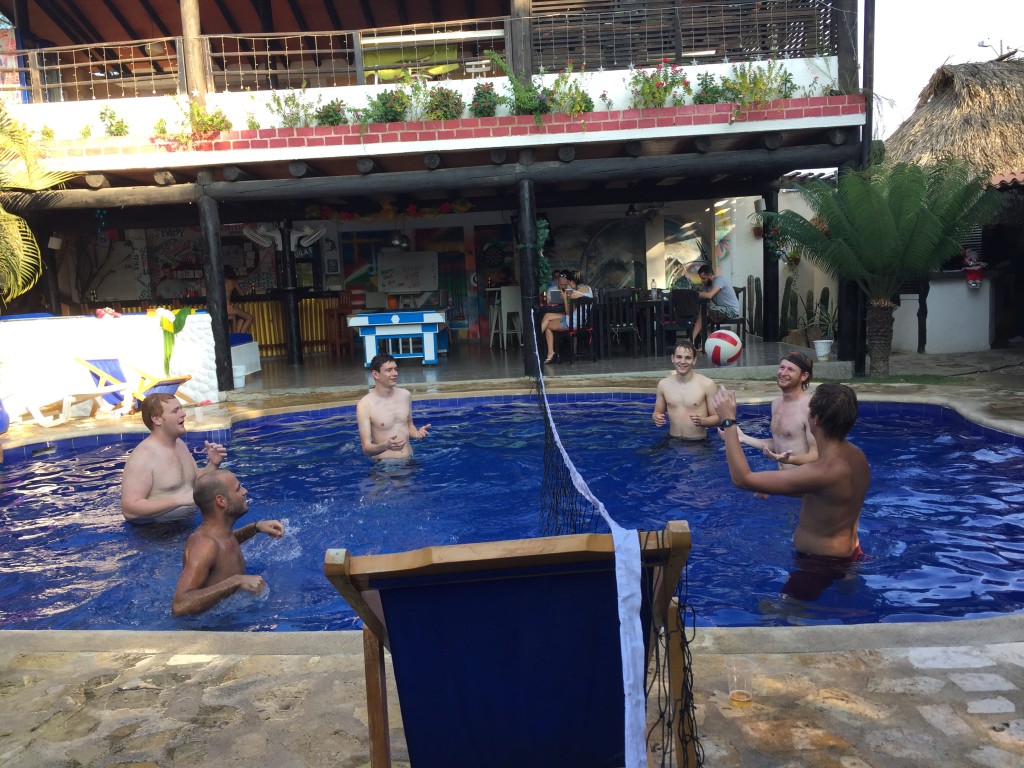 In the week I spent basking in their insanely good energy and superb, unparalleled, frat-boy-meets-celebrity style party skills, we sat around in hammocks and were lazy by the pool, drinking mojitos and beers and ordering pasta from the hostel restaurant. 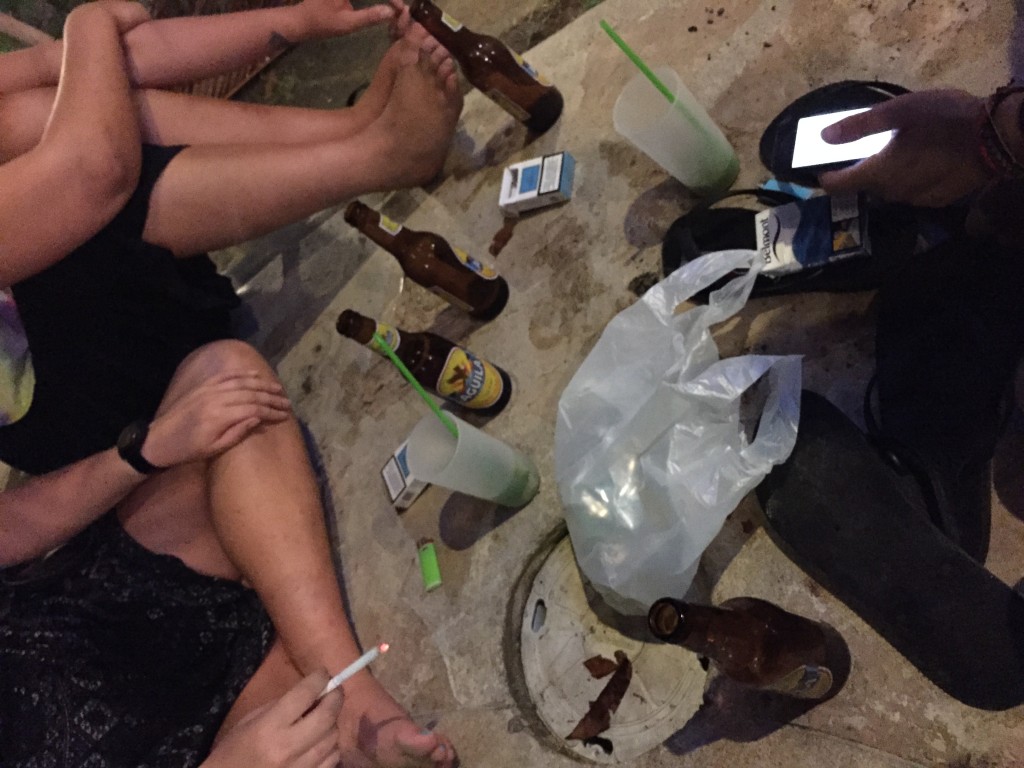 We trekked to the forest in Minca, a small town nearby, to visit the waterfall at Pozo Azul, and we stayed at the Dreamers in Palomino where the only activity we truly engaged in was trying to stand up in the freakishly strong current of the ocean nearby. 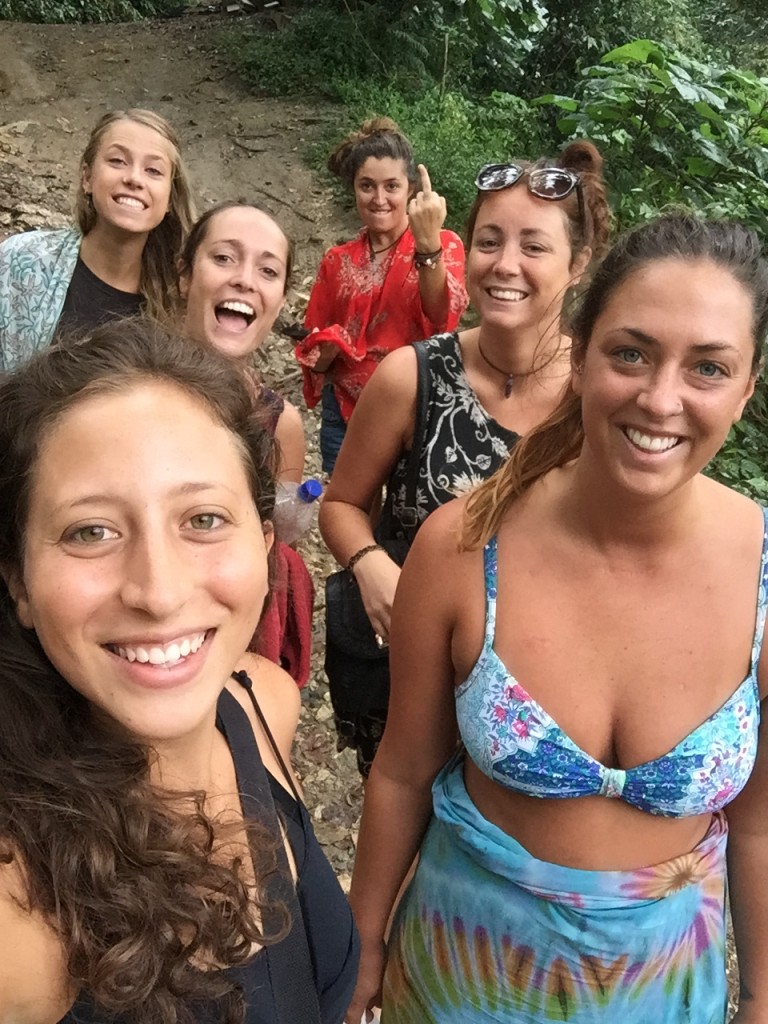 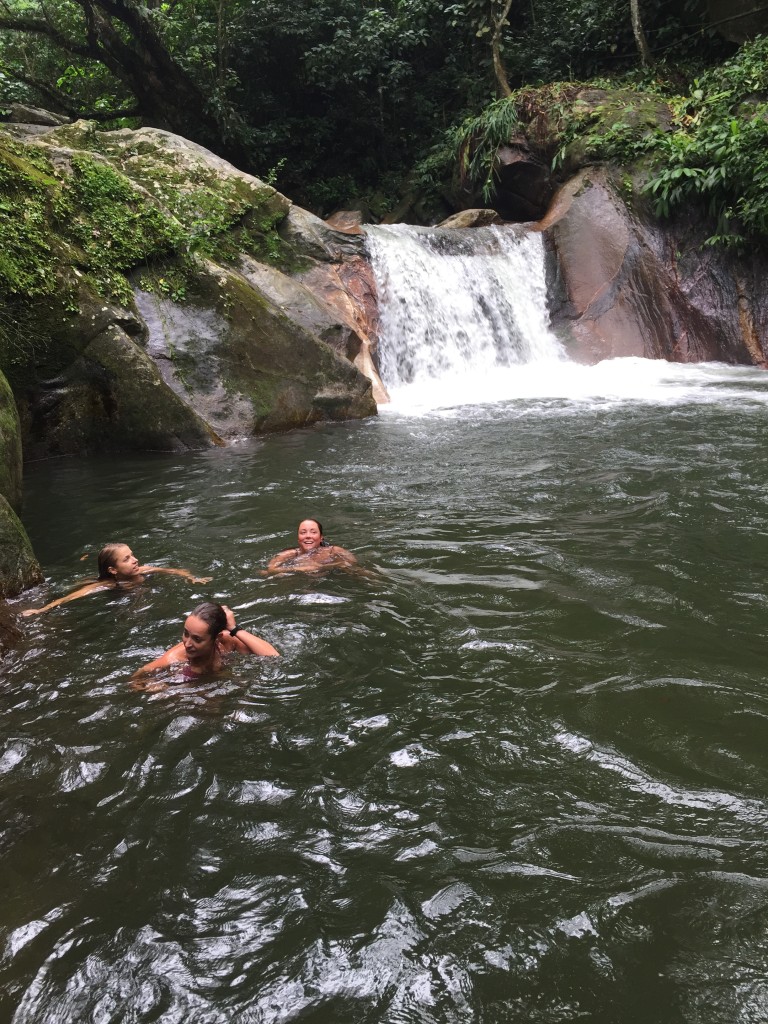 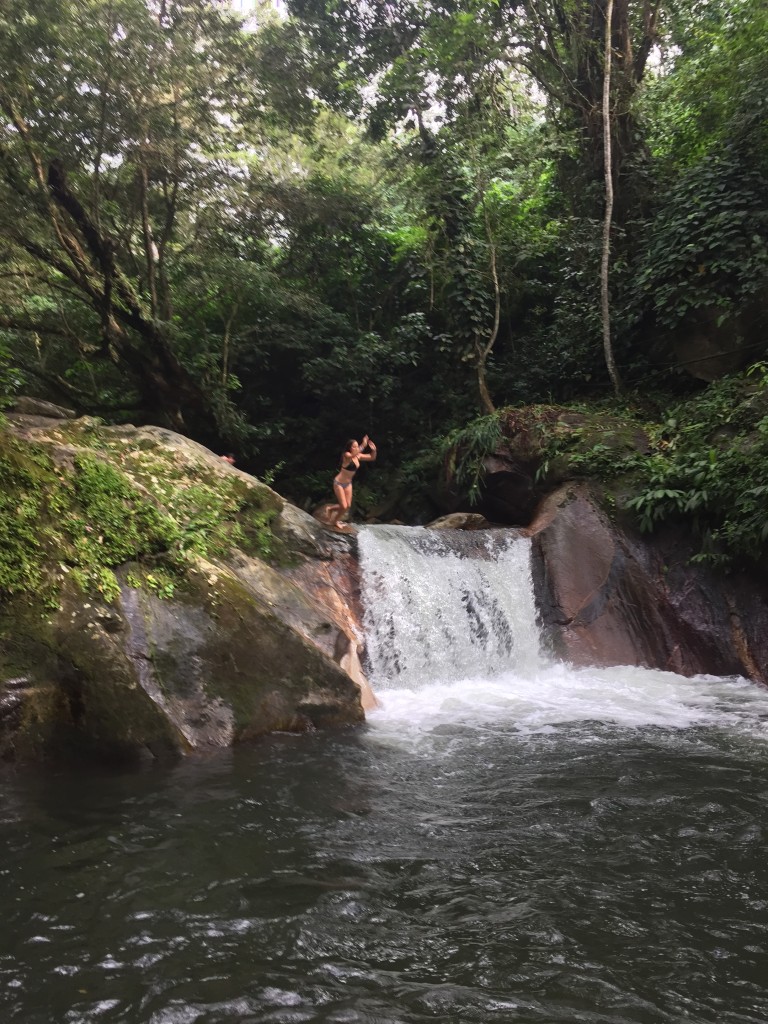 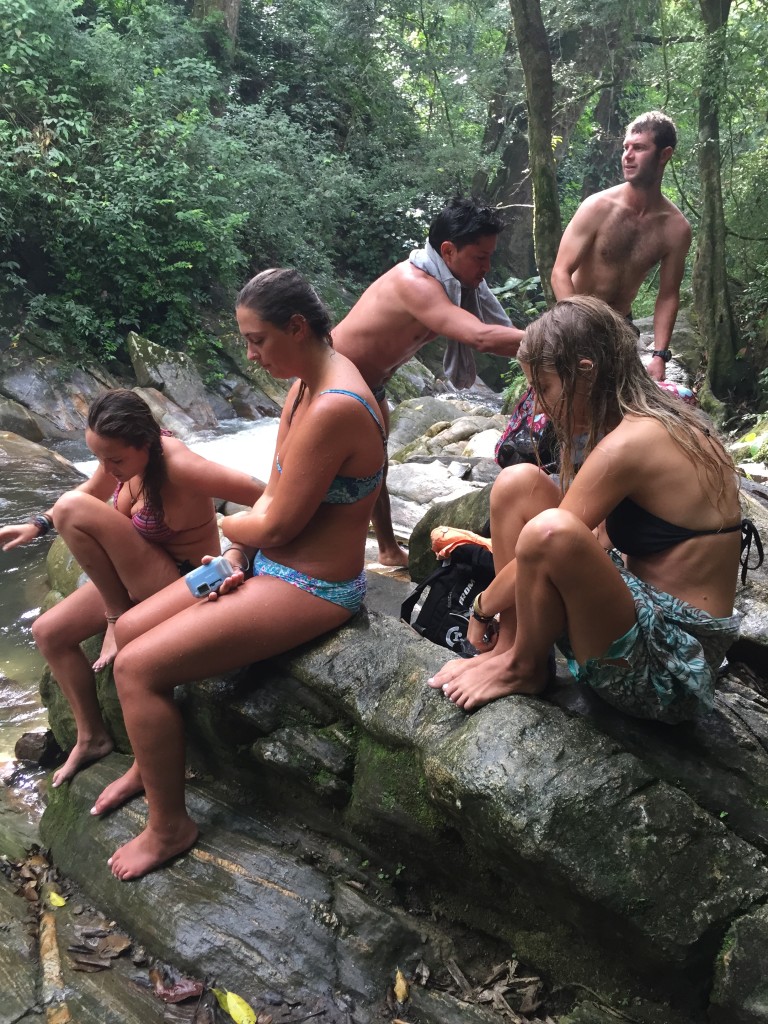 They showed me an awesome time at a nightclub overlooking the bay of Taganga, called el Mirador, and kept me awake yet asleep on my feet, way past my bedtime, at an after party that lasted well past sunrise. I listened intently as they told me about their small town in Australia called Geelong, and watched with amusement a zombie apocalypse tourism campaign done by their crazy mayor whom they all voted for out of humor.

I politely accepted or declined bumps, shared clothes, talked about boys, exchanged travel stories, cooked meals, brainstormed on different uses for vegemite, got drunk, passed cigarettes, had heart to hearts. They even gave me a nickname, Bec, to match all of theirs, which I found very touching.

I guess this isn’t a post on things to do in Colombia, but this is what I did my last week of my backpacking trip. I found some good girls and rolled with it, because it’s not always about climbing every mountain or visiting every national park or joining every tour. More often than not, traveling is about the people you meet and what they teach you about yourself. These girls taught me that it’s ok to just chill and enjoy the company around you. They showed me that it’s possible to be accepted as family just by being a good person, and they helped me recognize that I have worth and that I am loved.