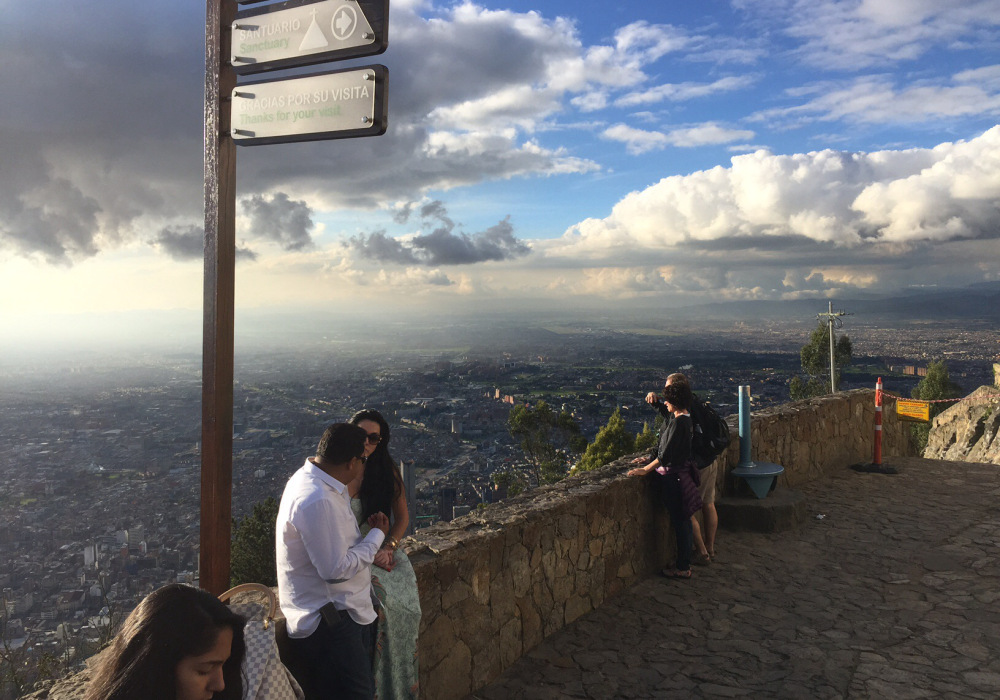 The street food in Bogota and Colombia in general will have you drooling.

Munch on arepas and papa rellena as you admire Bogota’s fast paced life and impressive graffiti.

Bogota, Colombia’s capital, is by far the most commercial city that I have encountered in South America. I only stumbled through a few neighborhoods, but I could tell that I wouldn’t get to know even a sixteenth of the city in the three days I would be there. It reminded me of New York in that limitless way that can keep you constantly entertained if only you had the time, money or energy to stay put and explore. The second I left my hostel and took stock of where I was, I felt plugged in. 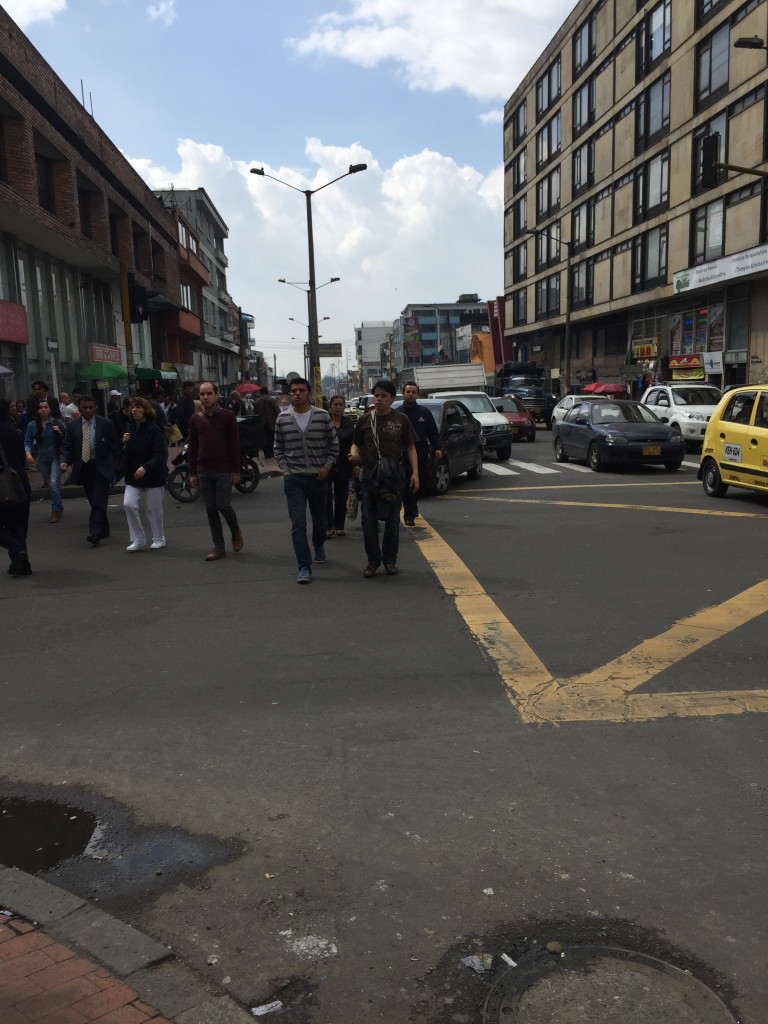 The streets and the people on them are sort of bleak and direct, moving nonstop underneath a smoggy sky. The indifferent pedestrians make cars stop by simply walking into the street. Bogota is not a walking city by any means, and the public transit, the Transmilenio, was confusing, but well organized, similar to the New York Subway. 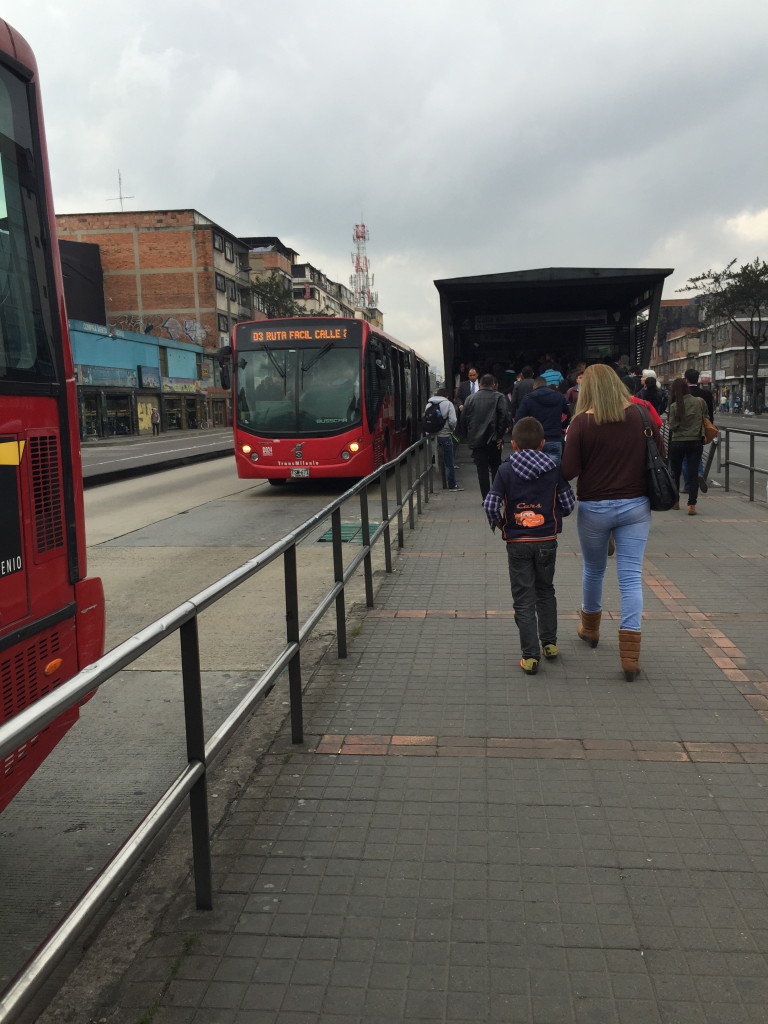 The architecture doesn’t give away where in the world you are. Symmetrical modern high rises in some neighborhoods blend with Tudor style houses in others, while Spanish Colonial buildings down the street clash with whitewashed, Greek-style frameworks with tiled roofs. I felt like I could be in Europe somewhere, maybe Poland or Ireland. 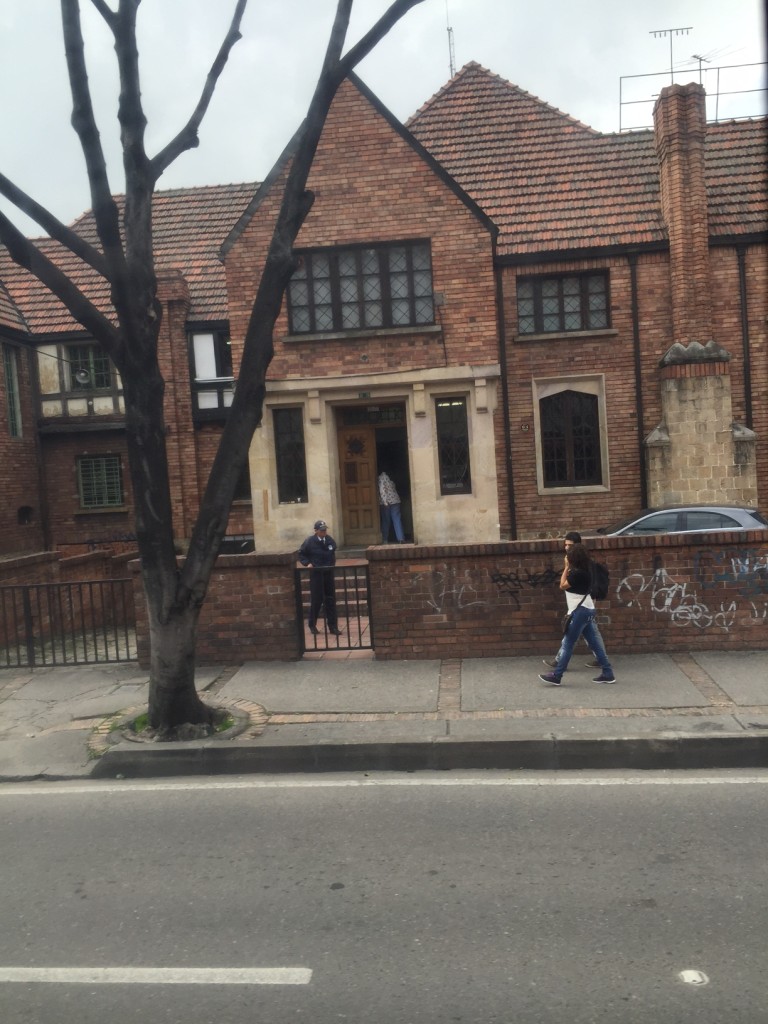 What’s to do in Bogota? There are plenty of tourist options, much of which involving parks and museums and churches. Or you could do what I did and take the bus down to La Candelaria (either stopping at Las Aguas or Museo del Oro stops on the bus) and walk around taking pictures of cool people and world famous graffiti. 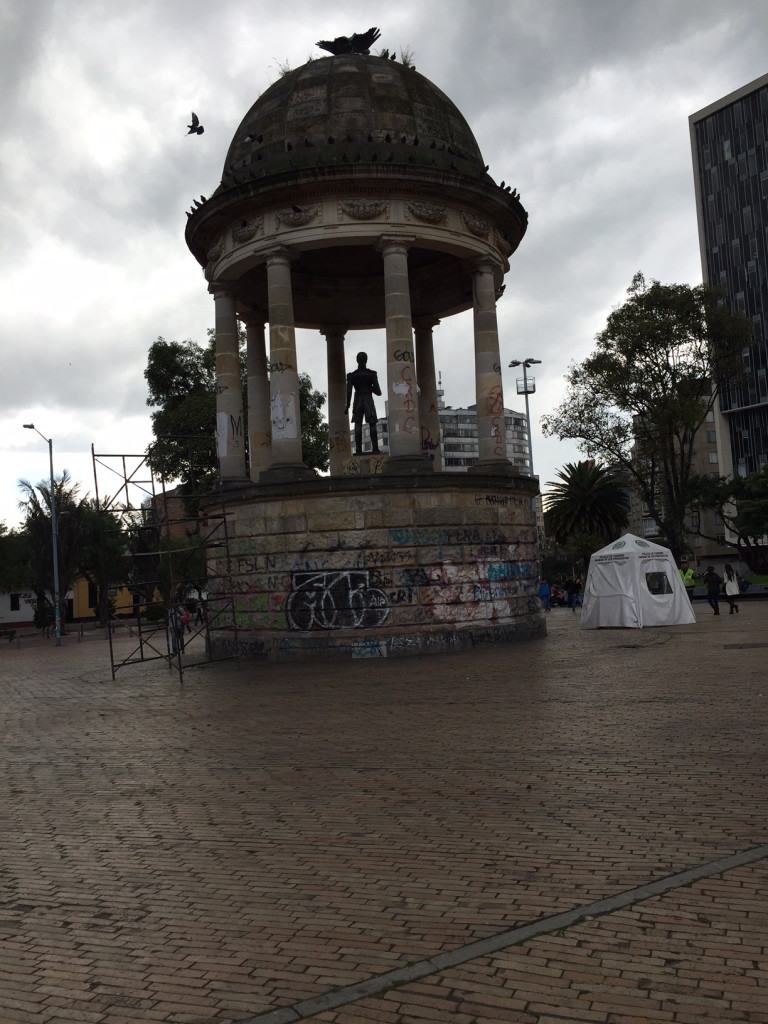 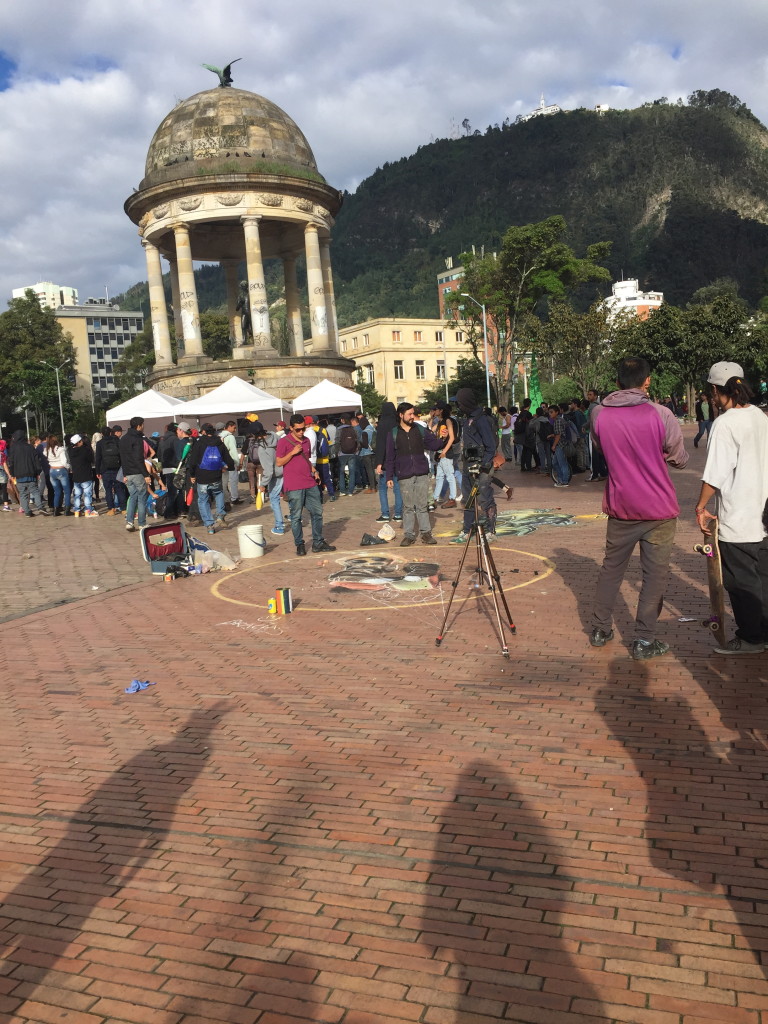 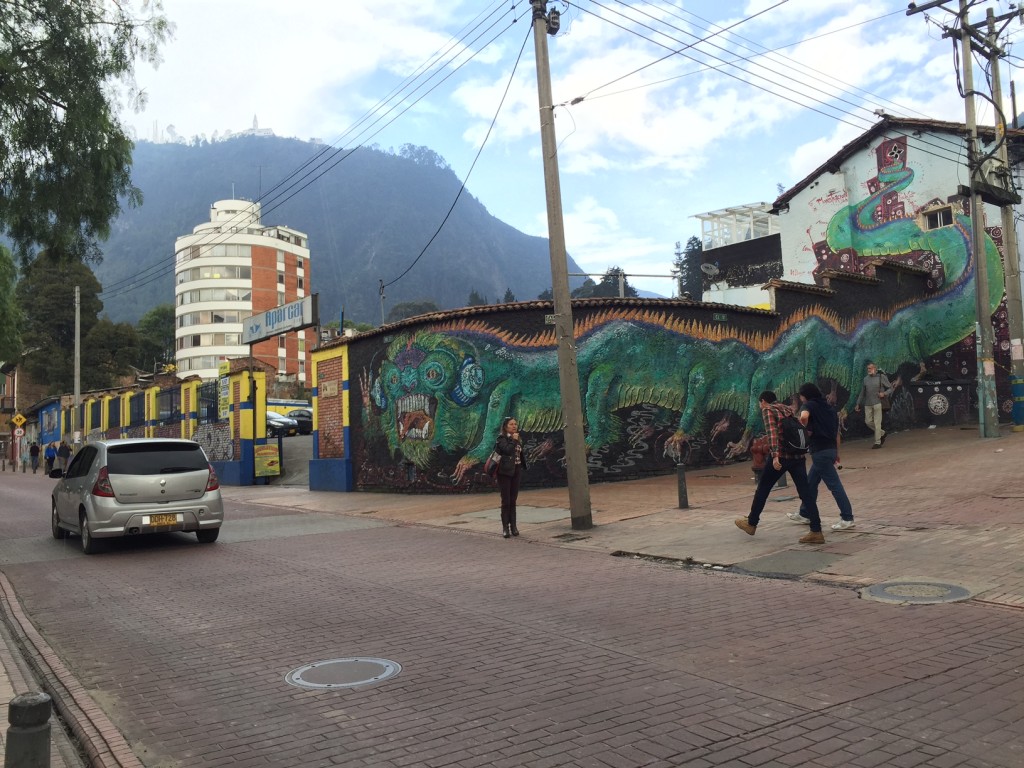 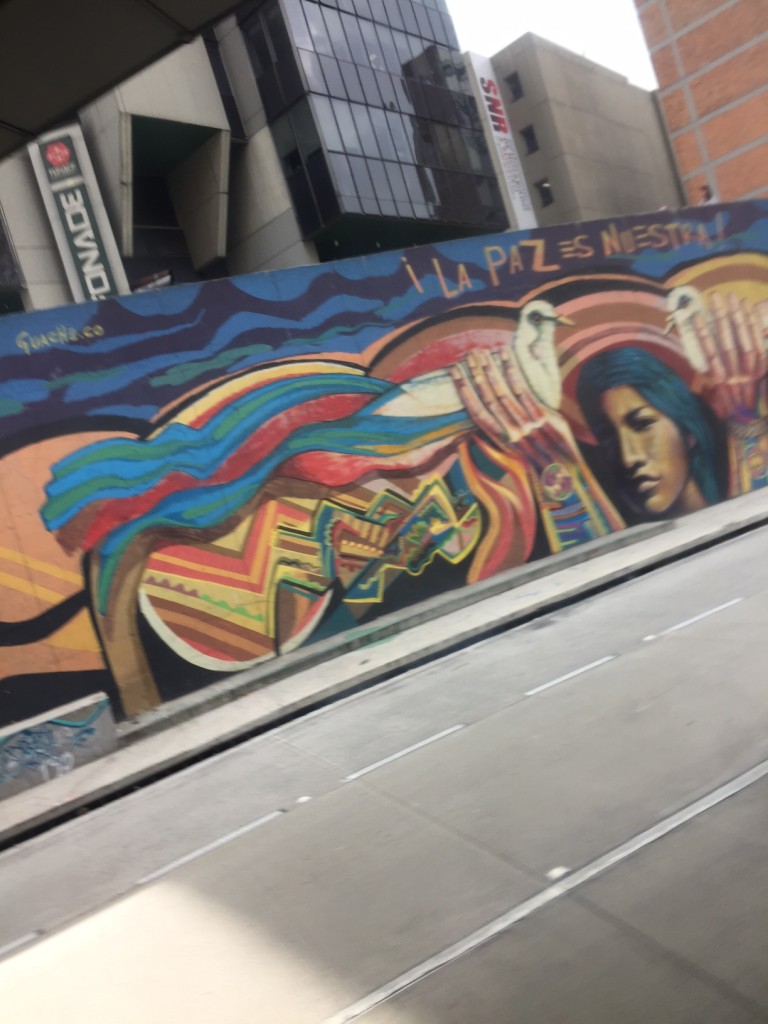 You could have a cup of delicious Juan Valdez coffee, Colombia’s Starbucks equivalent. The Museo del Oro, Gold Museum, was pretty cool and informative as far as museums go. 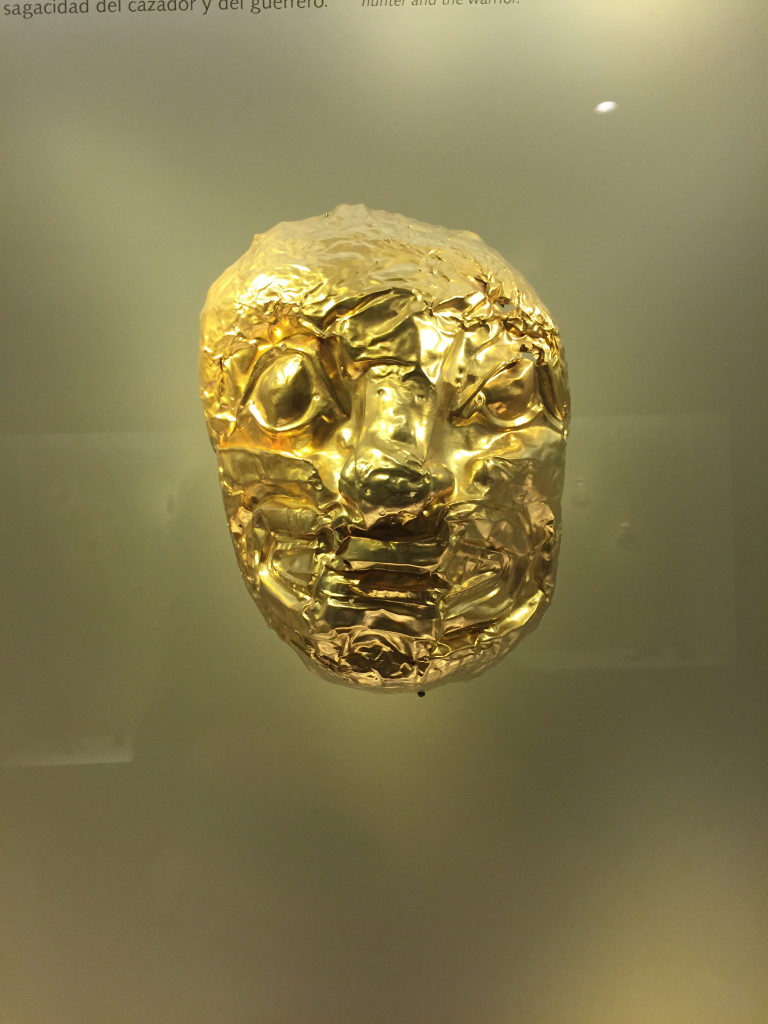 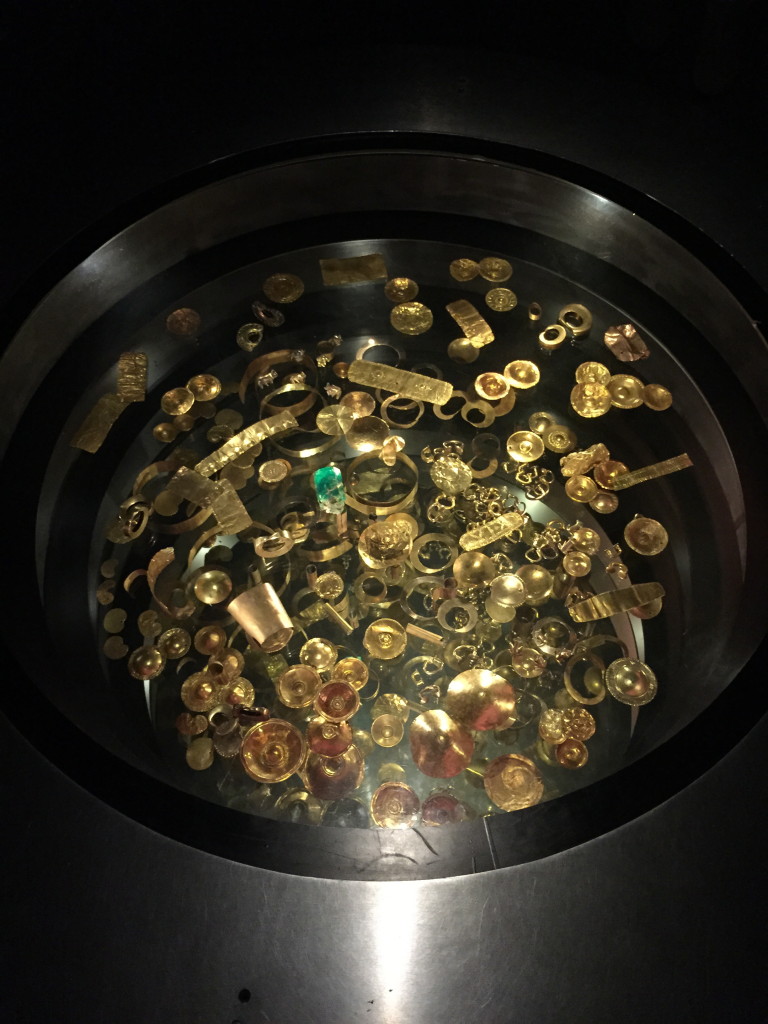 Riding the cable car up to Montserrat was beautiful and something to do. You can also walk, but the stairs were closed at the hour we tried to go, and I wasn’t having it anyway, what with the altitude and all. 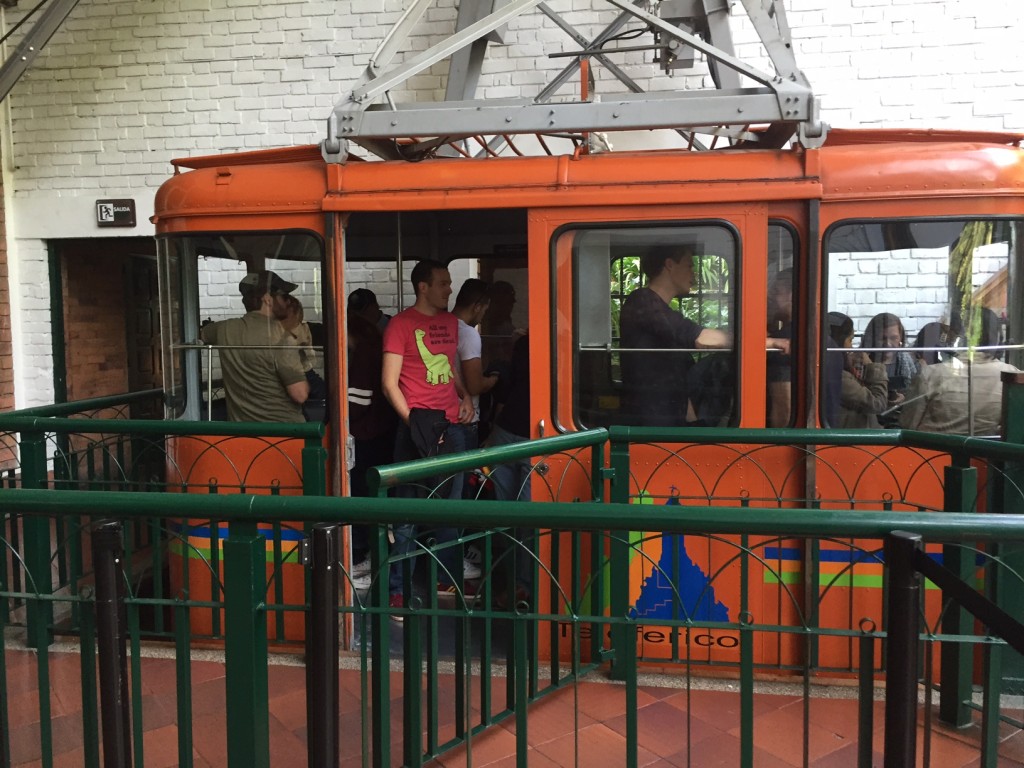 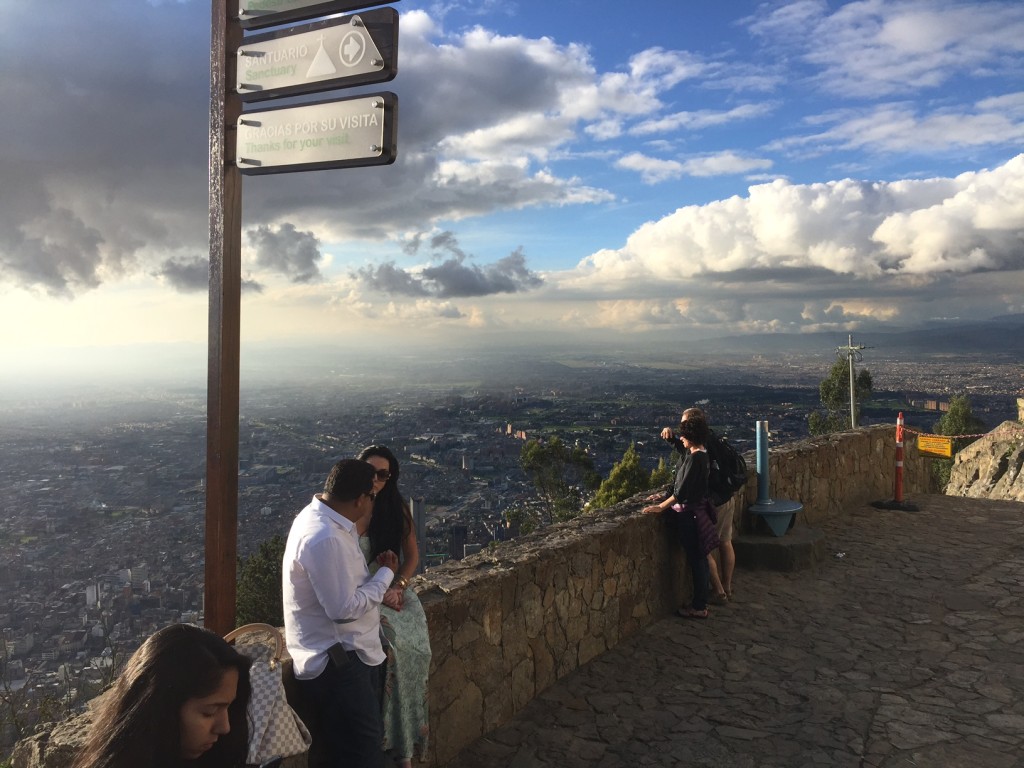 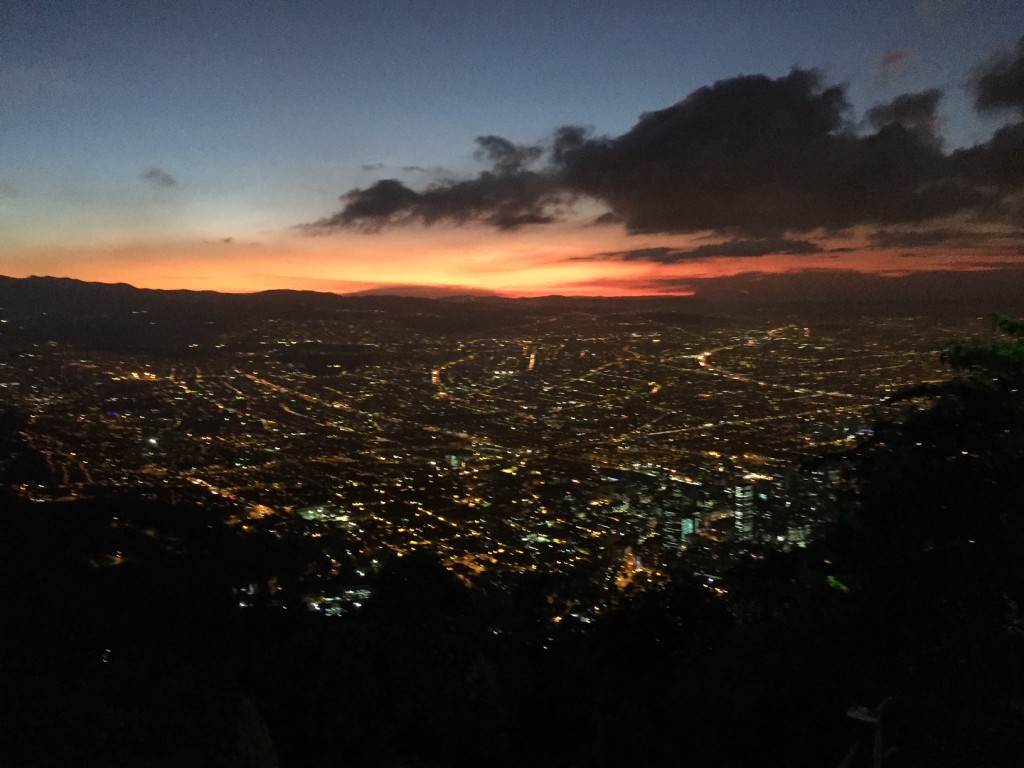 But I’ll reiterate—the city was just too daunting to decide what to do. It felt wrong, almost insulting to the locals, simply going from tourist destination to tourist destination when Bogota has so much more to offer as a legitimate place of living and working, not just one of those cities like Cusco or Florence that functions off of tourism. So, I bought stuff to pass the time.

There is always something to spend your money on, whether that be cheap watches and wallets from tables that line the streets, scarves or jewelry laid out on blankets on the pavement, the latest fashions from boutique stores, adorable puppies framed in windows and cages, or food. My god, the food. For every pizza place in Manhattan is a rotisserie/fried chicken joint in Bogota. While New York is obviously the capital of delicious nourishment, serving up literally anything you could ever want to eat, Bogota has one thing on the big apple- street food. 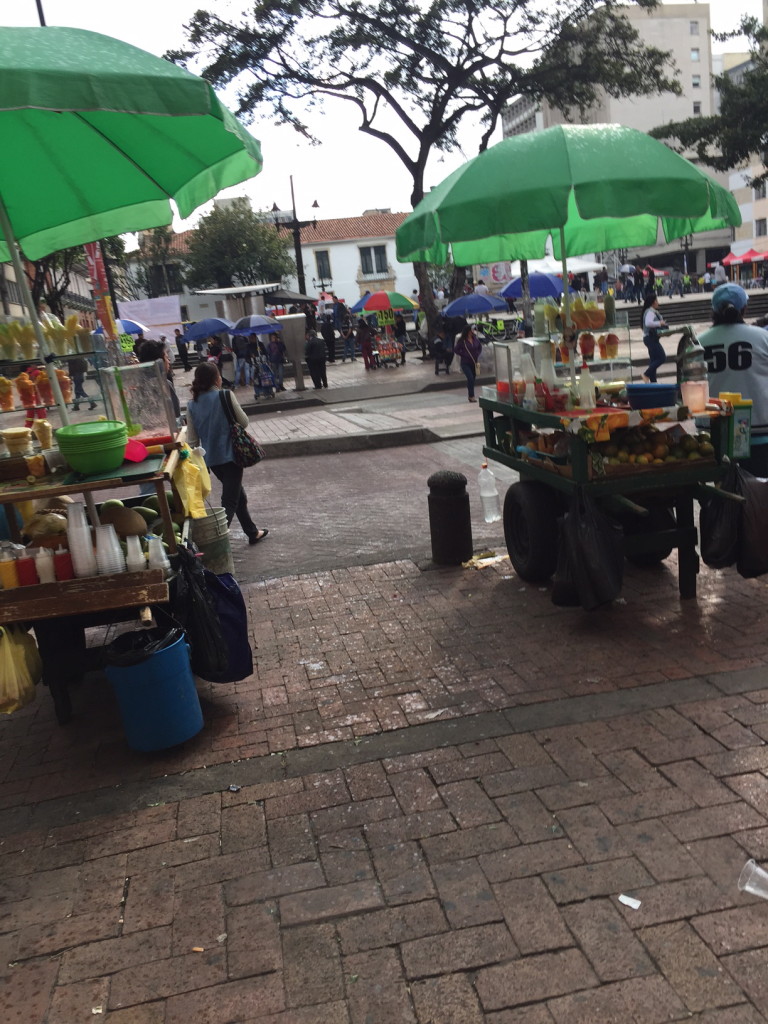 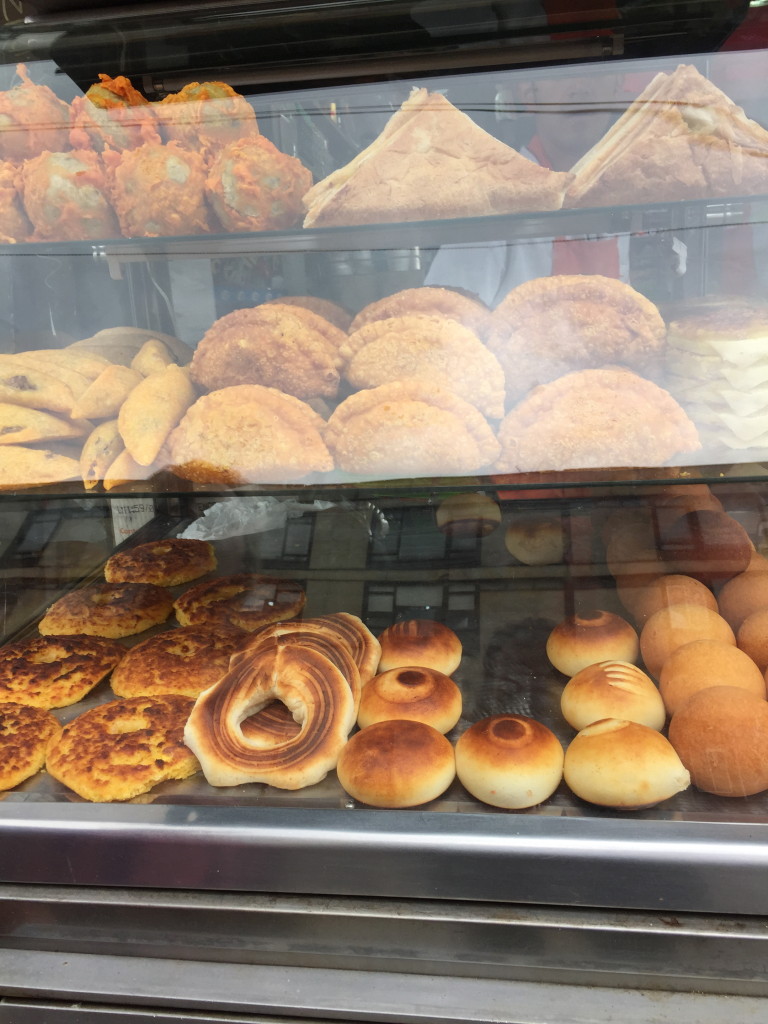 Street food. I say it in a suggestive whisper. Hey. You wanna go find some street food? Like any good big city, Bogota is constantly moving and the locals have to keep up. Which is why, I’ve decided, they are on point with their street food options. All the carbs and flavors possible in one concise, probably deep-fried package. For those of you solid New Yorkers who think hot dogs, pretzels, halal plates and Nuts4Nuts are the best things to shovel in your mouth while you’re strutting down the sidewalk, you don’t know what the fuck you’re talking about. I’ll just regale you with some of the delicious creations that I ate standing up in Bogota/Colombia in general.

Meat: Street meat is delicious. That is a fact. The end. 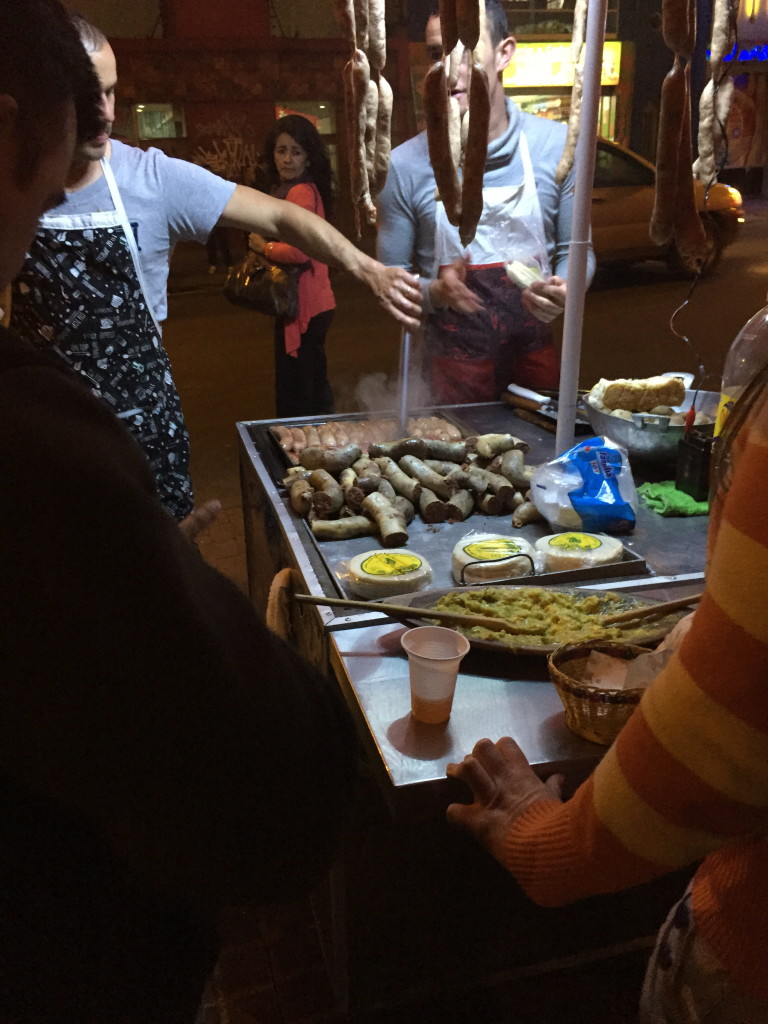 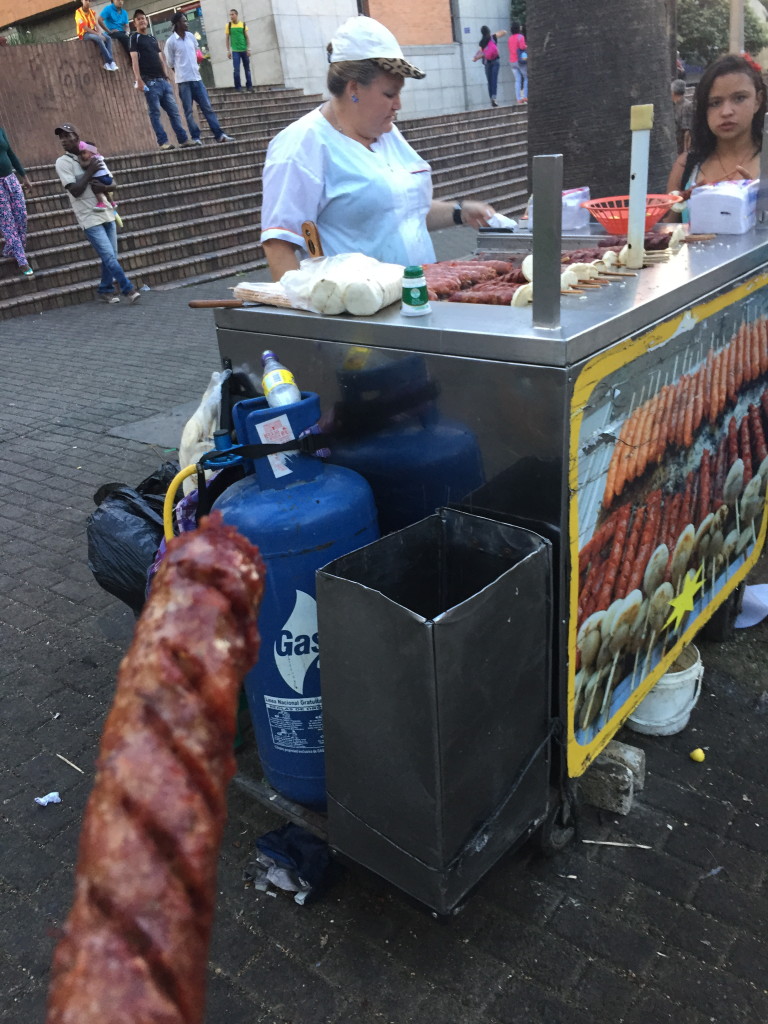 Arepa Con Queso: This is the classic, guys. The first arepa with cheese that I ever had was a bit sweeter and more corn-like than a classic arepa, which is basically a somewhat tasteless, ground corn dough pancake thing, for all you Gringos. The round yellow cake is savory with just a touch of sweet from the corn in the soft dough and was moist enough to eat without a drink in hand. 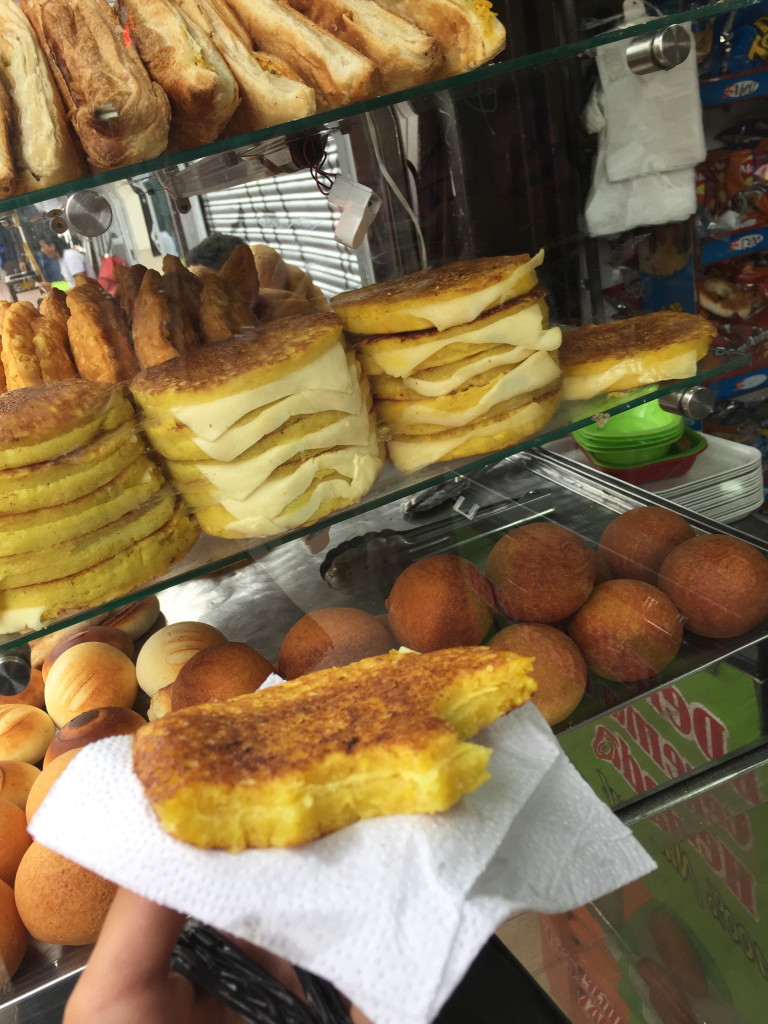 Arepa Sandwich: Arepas have the durability and neutral flavor to be the perfect base for a sandwich. My first encounter with arepa sandwiches was at Metro Arepas in Bogota, a small, open storefront with a kindly older man taking orders and a quiet, methodic woman filling my arepa with chicharron (fried pork skin) and cheese, brushing melted butter over the tops before she flipped it on the grill, and sprinkling salt onto the hot, greasy dough. I drooled as I watched her prepare my snack, and ate with gusto, licking my salty fingers and taking sips of Coke out of a glass bottle. The next time I had an arepa sandwich was at a super cool fast food strip along the highway in Medellin. While the menu over the counter boasted many different deli-style arepa sandwiches, I was in the mood for a burger and only didn’t order a burger at the counter over because I felt guilty not eating something Colombian. My messy, mass-produced, reheated patty topped with lettuce, tomato and mayo was the perfect combo of American and Colombian disgusting cuisines. My only regret was that I didn’t order fries to go with it. 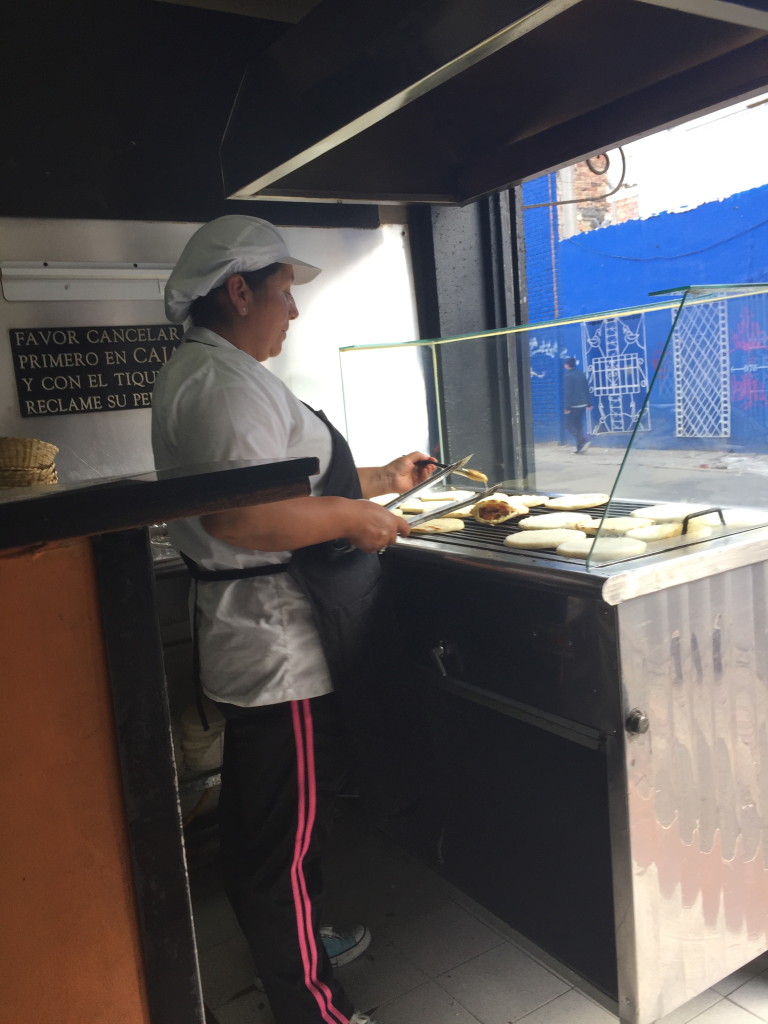 Arepa Con Huevo: Ok, so I know I need to quit gushing over arepas. I know so many people who hate them, although I can’t imagine why. If you’ve read the last two descriptions, you should have a decent idea at how versatile this Colombian staple is, so I don’t need to keep talking about it. I will, however, explain to you my final favorite, the arepa with an egg. On the corner of this street near my hostel in Cartagena was an angel who never smiled and was always making fresh arepas, empanadas and papas rellenas. While everything she fried in her makeshift street deep fryer was the most tasty, I kept coming back for those egg arepas. She stood every night behind a table, flattening and rounding out premade dough, filling it with ham and some other mystery ingredients, and frying it for a minute, then slicing it open a bit to drop in a raw egg and fry it again. The egg cooks fully in this time and once the masterpiece is handed to you, you join the crowd of Colombians standing around the table, alternating between spooning sauce onto their snack and taking bites.

Papa Rellena: Stuffed potatoes. Papas rellenas differ in innards from shop to shop and city to city, and none has ever been as legit as the first one I had. From the lookout point on the sidewalk, these lumpy yellow balls are about the size of a softball. They sizzle in oil before an attentive Colombian pulls them out with a slotted spoon and offers one to you, hot and fresh because they go that fast. The first tentative bite offers the taste of fried egg batter and mashed potatoes underneath. The second bite uncovers meaty rice beyond the layer of mashed potatoes, and under the rice is a hardboiled egg. Genius. Not all of the ones I’ve had were as good as this one. If you want this exact papa rellena, you can find it at one of the stands outside that big white Gothic church in Bogota. K?

Hot Dog: After a night of drinking and salsa dancing in Medellin, I was quite famished. I asked the cabbie who was taking Laura and me back to our hostel if there was anywhere we could stop and eat. He pulled over on the side of a city road where a couple of men at a stand were serving up burgers and hot dogs. I ordered two dogs for myself and watched patiently as they completed what I thought was someone else’s order. Dogs were fit into warmed buns, and then topped with, if memory serves, melted cheese, cooked ham, bacon bits, beans, mayo, ketchup, pineapple sauce, potato stix, and more sauces. When the man handed them to me I laughed in his face, thinking it must be a joke. But I ended up taking them like a champ (aka giving one to my cab driver). It was the most serious hot dog that I ever put down.

Patacón con Todo: Patacón, fried green plantain, with everything, and they mean it. I was wandering around the streets of Cartagena when I stumbled upon the Plaza de Trinidad, an open, brightly-lit square in front of a church with impressive Christmas light fixtures. Among the few steaming street food stands, one in particular caught my eye. The two men working it had a good thing going. They worked together like a machine, bantering in between creating nine plates of food, one of which would go to me. One man cut up the fried plantains while the other dumped two kinds of shredded meat (I assumed pork and beef) onto the griddle, onto which the first man immediately squeezed a bunch of some brown sauce while he added some cut up hot dogs to the mix. The woman who accepted the money (at these stands, there were usually one or two people preparing the food and one getting paid) laid out the plates as best she could given the limited space, and one of the men immediately plopped a heaping portion of plantain on it. The second man sprinkled a healthy handful of shredded lettuce over it with one hand while he stirred around some white cheese that he dropped onto the grill to melt with the other. On top of the lettuce went the meat mixture, then the cheese, then all the sauces, then potato stix and quite probably some chicharron, and voila, Patacón con literally Todo.

Bogota was whatever, but here’s what I ate. Hope I made you hungry.