I look around, and I barely see what I came here to see. Instead, I see unimpressed and pasty old white people straight off an expensive cruise, coupled up like they’re on a buddy system.

Source: That time I was just another tourist where they filmed Game of Thrones

I JUMP OFF THE PACKED PUBLIC BUS at the Old City walls of Dubrovnik, Croatia, and the tourism hits me all at once. As I jostle for a space on the sidewalk, I’m accosted by strangers leaning over makeshift podiums, screaming gimmicks at me, their smiles plastered on insincere faces.

Hi there! Are you interested in a Game of Thrones tour? Wine and bike rides? Kayak tours? Dalmatian tours? Explore Dubrovnik by boat? Etc, etc?

How does one reply to all of this unwanted attention, this breach of private space? My New York breeding taught me to keep my head down. Don’t make eye contact. Keep walking. The tourism workers don’t seem to like that. I get called rude as I pass by. Some make passive aggressive comments.

Oh, so you’re not interested? That’s fine. Have a nice day.

I walk with the throngs of other tourists towards the city walls, but then I beeline towards a sliver of water I see beyond a bit of the old fortress. I’m searching desperately for a semblance of normalcy, to gaze out at the ocean and not at a sea of other assholes like me, toting a camera, hat, water bottle. Dressed in comfortable, quick dry clothes and ugly, easy-to-walk-in shoes. The whole ensemble that screams: I’m foreign! Take advantage of me!

There is a line to get to the wall that looks out at the ocean. I stand on my tiptoes to see that people are lining up to take a shot with one of the ultimate King’s Landing views. I don’t actually know what I’m looking at. A later Google search tells me that it’s the Pile Gate and the Fort Lovrijenac. Tourists are hastily snapping selfies and posing before someone obliviously steps in front of their shot. I push my way in to take a cheeky pano of the scene before I am pushed away by others eager to do the same.

I walk away from this disturbed ocean view to see what the fuss is about inside the city walls. Each movement is held up by the need to say “Excuse me” to more strangers as I awkwardly stroll-duck through their pictures. I look at them as I pass, the fascination of Dubrovnik’s fortress completely lost to me in my horror at what tourists like me have done to its assumed charm. Some posers pose excitedly, some look away nonchalantly — perfect for Insta. Some stand there grudgingly, looking truly over the experience of proving that they went somewhere by standing in front of it and every other person just like them. I feel their pain.

What the fuck am I even doing here? You hear the name ‘Dubrovnik’ on the Balkan backpacking trail often enough. It’s the next stop after Kotor, Montenegro. You Google image the city, get a feel for it. You think it looks cool. Incredible, really. You need to see it for yourself. Some people warn you that it’s touristy. A few backpackers at your last hostel or at a bar in Skopje tell you something along the lines of: When I was there a few years ago, Dubrovnik was just a small, cute town. Game of Thrones ruined it. And, it’s pricey. But worth a look.

I knew all this, yet here I am with the others. We, the tourists, flock in heinous amounts like pseudo-traveller drones. I wonder if anyone here even knows anything about Dubrovnik or Croatia? I realize that my own knowledge is slim. I’ve been moving around so much, jumping from place to place, that I keep catching myself in a new city without even knowing what the currency exchange is or how to say “thank you.” The Old City is amazing, architecturally speaking, but what am I even looking at? What am I snapping photos of? I feel as though I had better take a picture of the stately structures elevated around me because a photo will last longer than my meager impressions of this city on display, bared to appease the demands of the Almighty Tourist.

I could be anywhere in the world right now. I look around, and I barely see what I came here to see. Instead, I see unimpressed and pasty old white people straight off an expensive cruise, coupled up like they’re on a buddy system. I see Asian tourists with masks on, and loud, overweight American families toting frozen beverages. I see other backpackers like me, staring upward and eating ice cream. A lot of people are eating ice cream. The only locals I see are the ones who serve the ice cream.

I’m overstimulated. I stop at a cafe for an espresso. You know a place is touristy if you can pay with a credit card, at least in this corner of the world. Extra points if all the signs are in English, and if the menu is in six different languages.

I take my time using the cafe’s wifi. I’m scouring Wikipedia for historical context about Dubrovnik. It’s a Croatian city on the Adriatic in the Dalmatian region. UNESCO World Heritage Site. Maritime trade increased the prosperity of the city. City walls constructed from 12th to 17th centuries. Never been breached. The Republic of Ragusa existed from 1358 to 1808 and was a commercial hub that acted independently, despite being a vassal of the Ottoman Empire. The people mainly spoke Latin. Their motto was “Liberty is not well sold for all the gold.”

I pay my bill and move along, searching for a route to the holes in the wall. Someone told me you can jump into the water from there. I didn’t bring my suit. In my quest, I find a slightly more quiet part of town, so I sit on one of the old fortress walls and try to look out for a sign of these holes. The stone is hot from the sun, and I pull my hat down over my eyes for a bit of extra shade as I look out at the bay. I think this view may have been in Game of Thrones, too, but I can’t remember. The sound of water gently lapping against the sand and the tranquility of the small fishing boats, so neatly lined up before the small beach, calm my senses and help me think about why I even travel. Man, this city is starting to break me.

Ok, why do I travel?

I travel because I get to have genuine experiences every day. I get to be free, to roam as I please. That’s why I like to stay a bit off the beaten track. If my experiences aren’t genuine, then what am I doing traveling? It’s more about what I’m not doing. Like not working, not making commitments. As I ponder my existential crisis, I wonder how all of the people touching and sitting on this ancient stone is affecting its longevity.

I walk back into the main strip of the Old Town, the Placa, to get my bearings again as I continue my search. As I look around, I get the sense that I’m at the Eiffel Tower combined with Six Flags on a Saturday in the summer. Some place that would warrant and forgive an influx of tourism to this magnitude. Only I’m meant to be in a city still. But it’s an “old city” so every stone is a monument, every alley is art.

Armed with my Olympus, I snap photos with a grudge. I think I’m getting closer to the hole in the wall. I’m walking around that bay that I had looked out at earlier, contemplating my traveling woes. The smell of the sea is comforting, and the Adriatic is a sapphire. I walk close enough to the edge for my feet to feel the spray and occasional crash of salty water. Three local fishermen sit together on a bench, a beer in each one’s hand. The smell of fish emanates from their direction. They look dirty and weathered compared to their fresh tourist counterparts, but not because they’ve been working. They look exhausted from watching all of us walk past all day. What must they think of us? They look at me as I walk by, seemingly ready to make a cheeky comment that reinforces their sense of manhood. I stop in front of them and ask to take their picture. Two of them smile accordingly. One covers his face with his hands. I take the photo anyway and look at the picture on my camera screen to make sure no tourist walked into my shot. 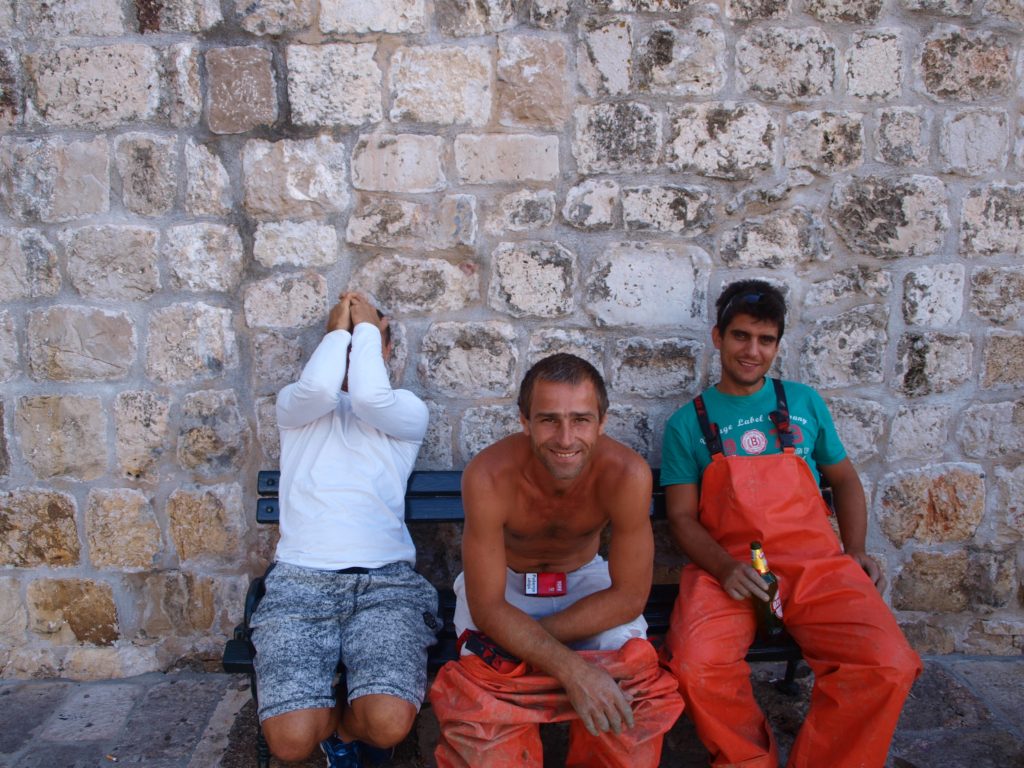 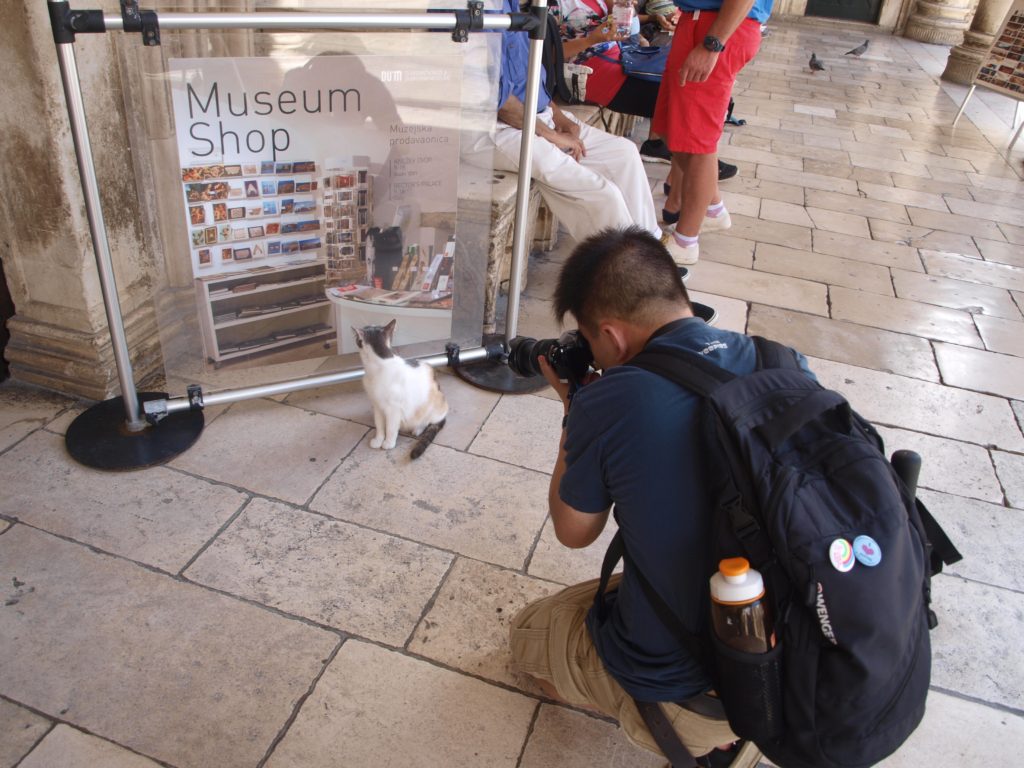 This entertains me until I reach the holes in the wall. I walk through some quiet back alleys where laundry hangs between the buildings, and this visual gives me hope. I don’t know if I’ve actually made it to the alleged “holes”, but there is access to the sea, and surprisingly few have stripped off their clothes to jump in. I figure, why not? I’m here. Better than taking photos of tourists. I take off my quick dry clothes, my cheap sunglasses, my baseball cap that says ‘Godzilla.’ I put down my chunky camera, cover it with my clothes, and jump in. The water is fresh, salty enough to restore me. Suddenly, I’m a traveler again, living in the moment, going with the flow. I smile at the child who has jumped in after me, at the couple who share a wet kiss as they tread water next to me. Because at the end of the day, the essence of traveling is realized in small moments, like when you look up at the sky as you float on your back and realize how lucky you are to be bobbing away on this particular body of water. 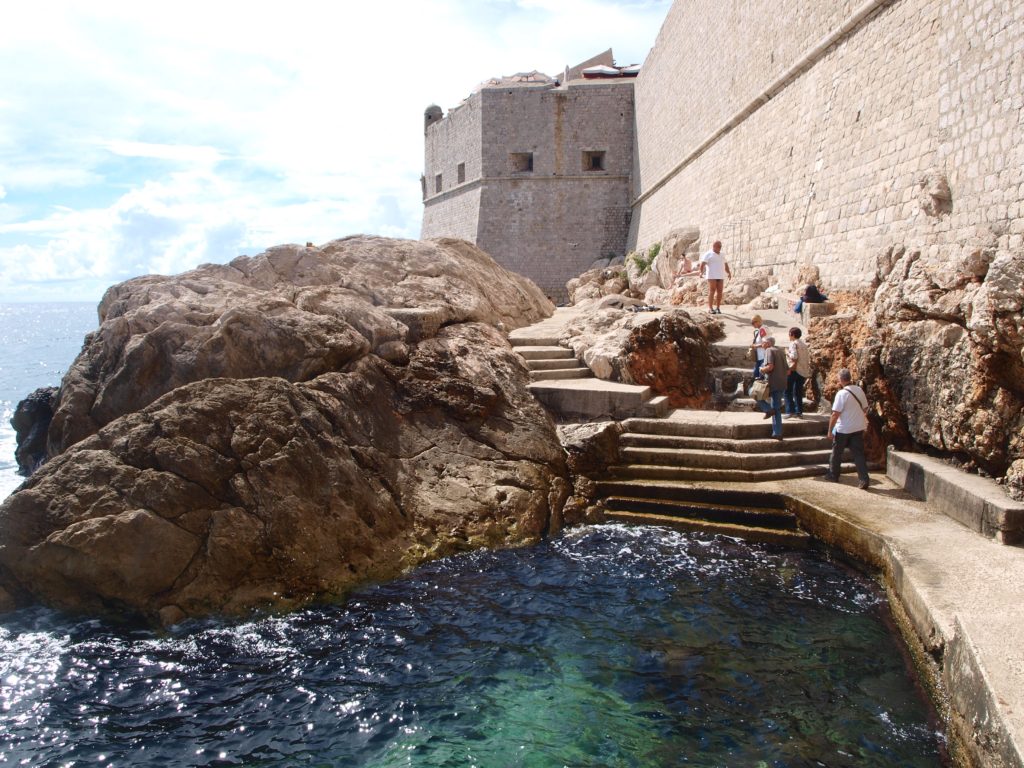