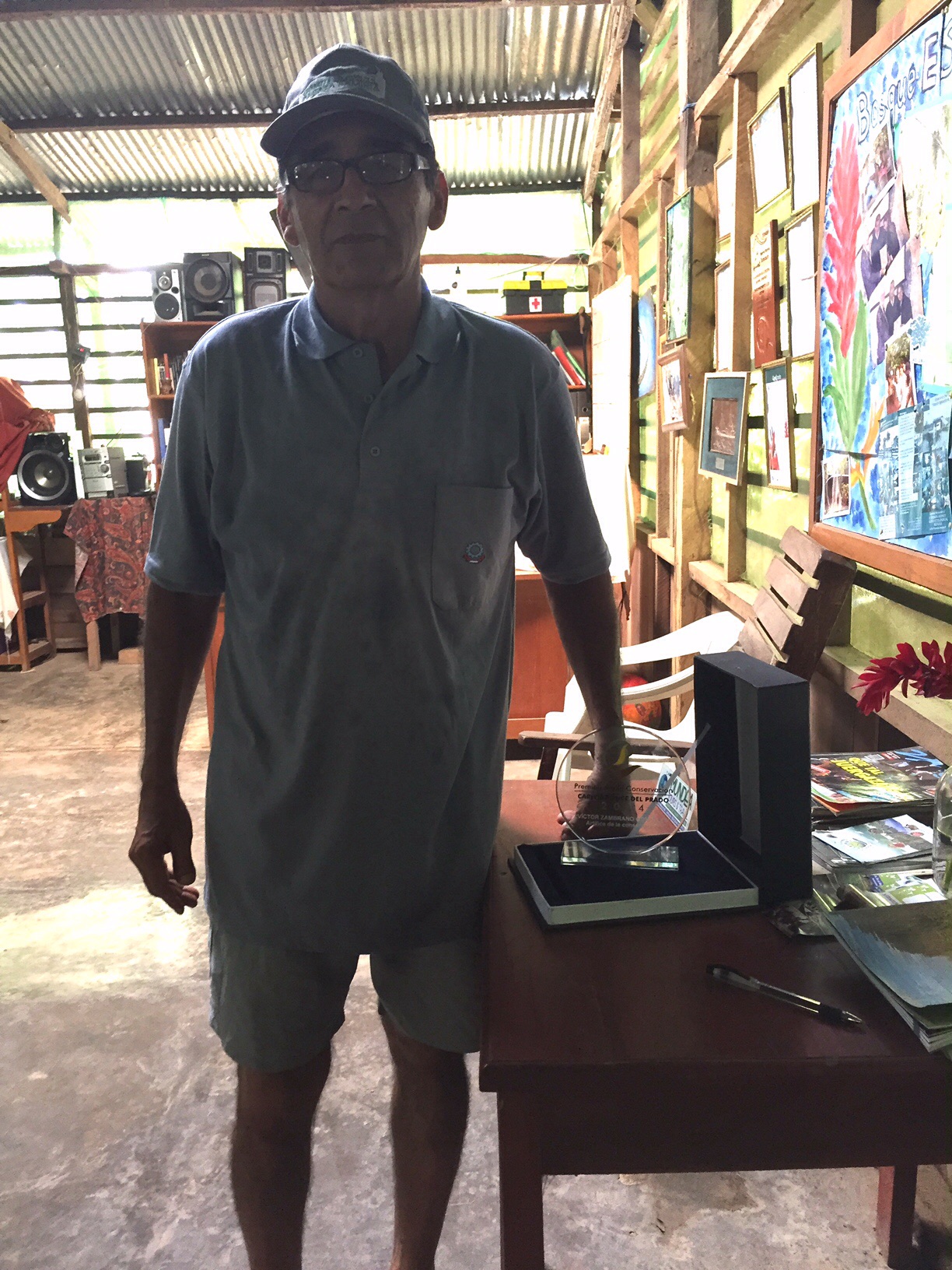 Victor Zambrano Gonzalez fights illegal mining and deforestation in his home in the Peruvian Amazon.

The 360% increase in the price of gold from 2001 to 2011, according to NASA, has led to a boom of unlicensed miners in Puerto Maldonado and the Madre de Dios region of the Peruvian Amazon, the most biodiverse area of the world. The Peruvian government has estimated that illegal gold mining, and the deforestation and mercury poisoning that comes with the highly destructive hydraulic mining, has devastated over 40,000 hectares of Amazonian forest in Peru. 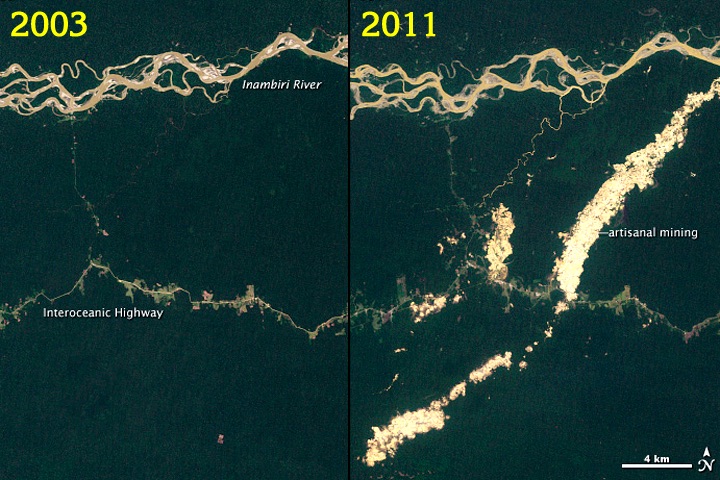 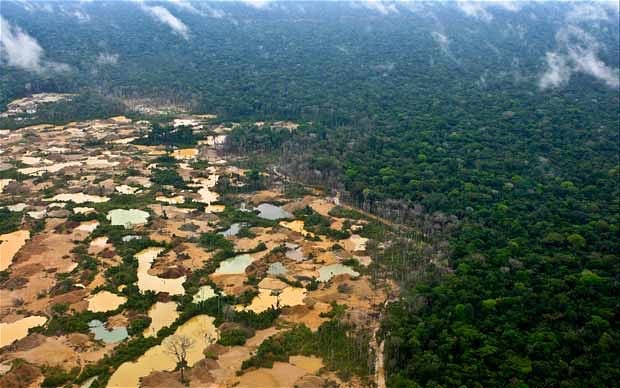 The poor town is now dependent on the illegal mining, becoming slaves to this culture that has not only ruined even protected parts of the rainforest like the Tambopata National Reserve, but also led to human trafficking, forced labor, extinction of indigenous groups, and countless deaths. People and wildlife alike are suffering at the hands of multinational corporations with no souls and deep pockets, and it is up to conservationists like Victor Zambrano Gonzalez, president of the National Tambopata Reserve management committee and founder of private conservation area Fundo Refugio K’erenda Homet, to fight big business to preserve Pacha Mama’s culture and history that goes deeper than the roots of the biggest Capirona tree. 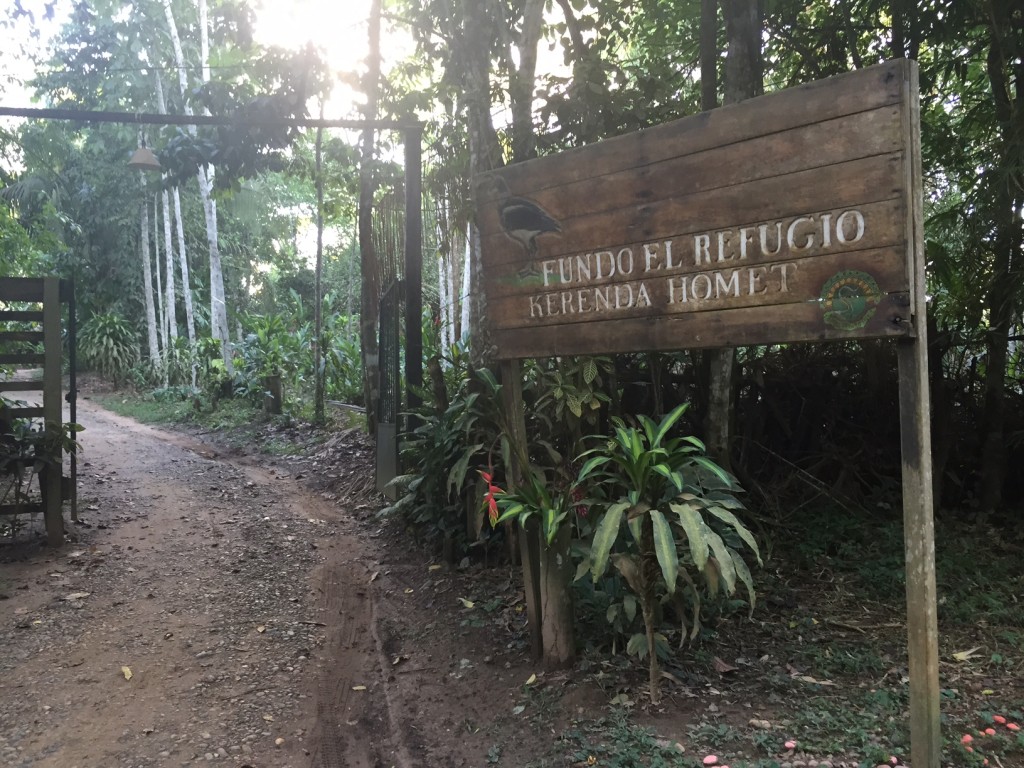 “I am on the front of a war with illegal gold miners destroying this zone,” said Gonzalez. “Mining and logging are permanent threats to the Madre de Dios region.”

Victor can proudly say that his 40 hectares of government-protected land is free of illegal mining and logging, a luxury he had to work hard for. He founded the reserve, about 3.5 kilometers down the new Interoceanic Highway outside of Puerto Maldonado, in 1988. A Madre de Dios native and kin to the first Peruvians to colonize this part of the jungle from Arequipa and Cusco in the early 20th century, Victor always identified with the Indians of the region who lived as one with their land. In his youth, he spent 15 years away from his home training and teaching in the marine corps. When he returned in the ’80s, he was shocked to find the land around the Tambopata River where he now resides completely deforested due to small-scale mining that took off with the increase in gold prices in 1973.

“People told me I was crazy to try to restore it, that the land was dead now. But I feel a love for this land…I would give my life for it,” he said.

So Victor set about planting trees in the region in the hopes of returning the earth to her original splendor. With the help of a donation of 1,000 trees from an American organization, he used the disorganization of the jungle itself as inspiration. Rather than trying to make order of which trees and flowers and plants he was planting, tracking the sun like other farmers have done, he planted trees among flowers and medicinal plants with no particular order. Pachamama isn’t organized, he reasoned, why should he think that he could do better? 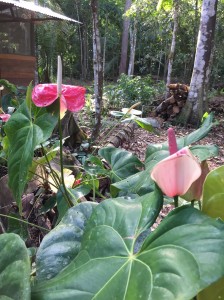 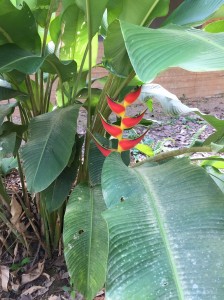 “I always try to break the boundaries,” he said, gesturing emphatically with his hands as he stood next to a wall covered in his framed recognitions, such as the Carlos Pince de Prado Prize for Conservation in 2014 and international recognition as an Ashoka Fellow, a social entrepreneur who provides innovative solutions to social problems and the potential to change societal patterns.

Victor found that by planting trees closer together, they were able to grow faster because they would compete for sunlight. Within the first ten years, he was able to grow 1,000 trees per year. Now, his beautiful land along the brown Tambopata is home to 20,000 trees, made up of 120 different species. 60 percent are native trees and 40 percent are tropical, and similarly 60 percent are fruit trees and 40 percent are medicinal. He donates half of whatever produce his lands create, like lemons, peppers or flowers, and sells the other half locally.

“The flowers are not separated from the trees. They grow in harmony with the trees. I’ve demonstrated that it is possible to regrow giving nature the opportunity to help itself,” said Victor, who included that it is his dream to fill the land with animal life, both native and farm.

The reserve is named after his daughter, one of five children, who, now 18, showed the most interest in his work. Victor recalled with clear love in his eyes how, as a girl, K’erenda Homet would accompany him on his tours around the grounds and tug his pant leg and whisper up to him if he forgot to mention something like this plant or that flower.

“She will take on the responsibility of the fundo,” said Victor, exclaiming that he wants to be able to leave this world knowing that someone is continuing the struggle to protect the land.

Another such struggle is making sure the Interoceanic Highway is built with the environment in mind. The project, that is meant to connect the Atlantic and Pacific Oceans through Brazil and Peru, has been talked about since the 1960’s. The Brazilian and Peruvian governments finally reached an agreement to begin the highway that would cross the Andes and the Amazon in 2004, citing a potential 1.5 percent increase in GDP per year that the highway would create. The Initiative for the Integration of the Regional Infrastructure of South America (IIRSA) backed the highway due to its desire to improve communication and reduce poverty in South America, seeing nature as a barrier to the unification of the Latin countries. Victor and other conservationists at first promoted the highway, thrilled with the prospect of being connected more easily to Puno and Cusco (MAP). He and others whose lives revolve around conservation and development thought, idealistically, that the forest around the highway would surely become government-protected land, and that the project would be done in line with the Law of National System of Public Inversion, which dictates the cost-benefit analysis of any public works project after conducting a comprehensive study of the methods, execution and potential consequences.

Victor lamented that then Peruvian President Toledo more or less ignored the regulations when he embarked on the project. The $84 million budget, that was created in 2004 for the highway that started in Brazil, was spent in its entirety within 100 kilometers of cleared forest. The new budget for the project is estimated to be around $1.6 billion, backed by CAF, the Latin American bank for development created in 1970.

“They started the project without a full study and calculation of the effects, despite the warnings of conservationists and scientists,” said Victor.

Now, as it is clear that there is a serious lack of enforcement in the Madre de Dios region, Victor worries that the Interoceanic Highway will only make it easier for illegal miners to transfer their booty and lead to untouched land more easily accessed for plunder.

Victor claims that he is a farmer at heart, and says that we need to ask the land for help when it comes to the conservation of natural resources.

Walking around Victor’s land full of natural resources, it is not hard to see why he fights so hard to protect the forest. As he glided past the plants, tapping big leaves like blankets or pulling weeds out of the ground, he explained that he sees the plants as his children. He began pointing out different plants, fruits, trees, barks and roots and describing which heals what ailment and how to take the medicine. There’s santa maria for inflammation of bug bites, limoncillo for stomach aches, caña caña for general pain, para para for male stamina, pan de arbol sap for broken bones, cilantro to help pregnant women dilate while in labor, uña de gato trees (of which he has 4,000) for immediate relief of inflamed prostate, duerme duerme which shrinks when you touch it and helps children sleep. We passed a tree with slashes in the bark, and I asked if someone had been measuring the height of their children. He shook his head and informed me that this is the Sangre de Grado tree and its sap is used as antibacterial cream on fresh wounds. The list goes on and on. Victor even collected leaves of ishanga, marañon, cocona, limoncillo and guyaba for me when he noticed me rubbing my sore throat and instructed me to make a tea and drink it three times. I did as I was told and was healed the next day. 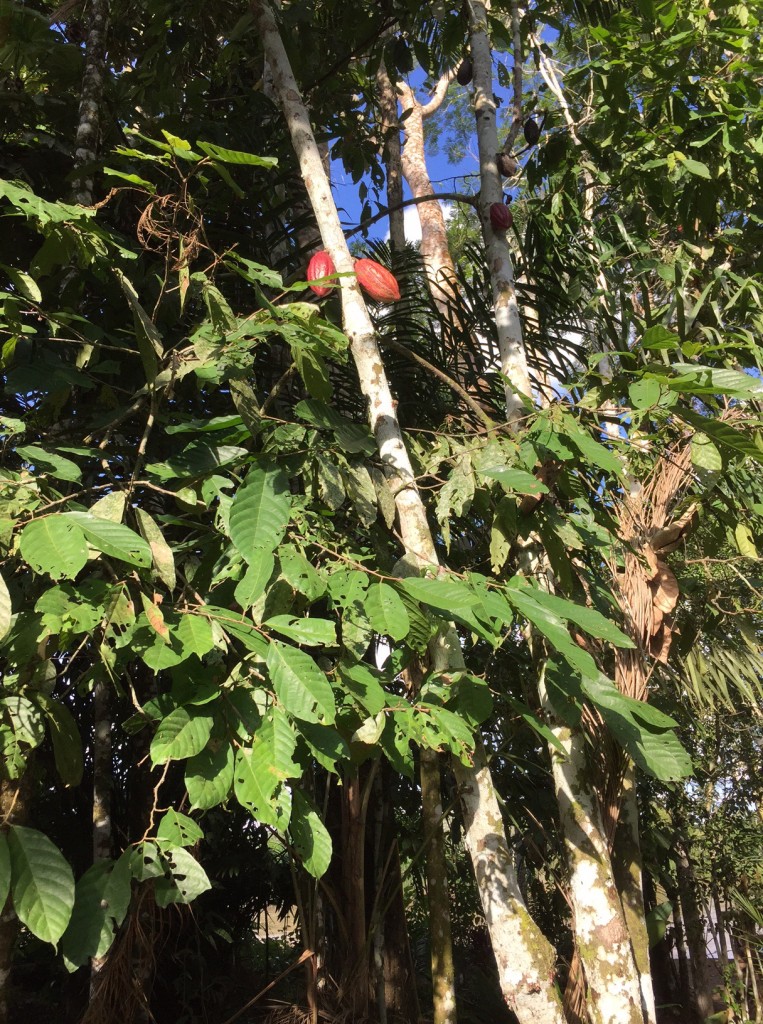 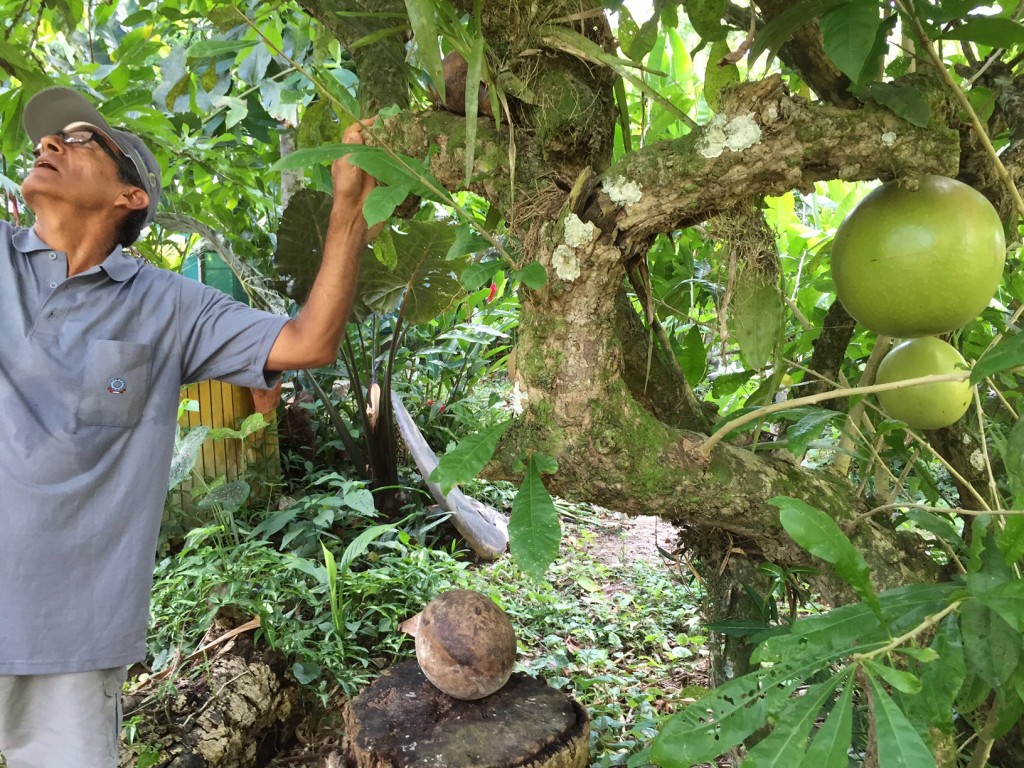 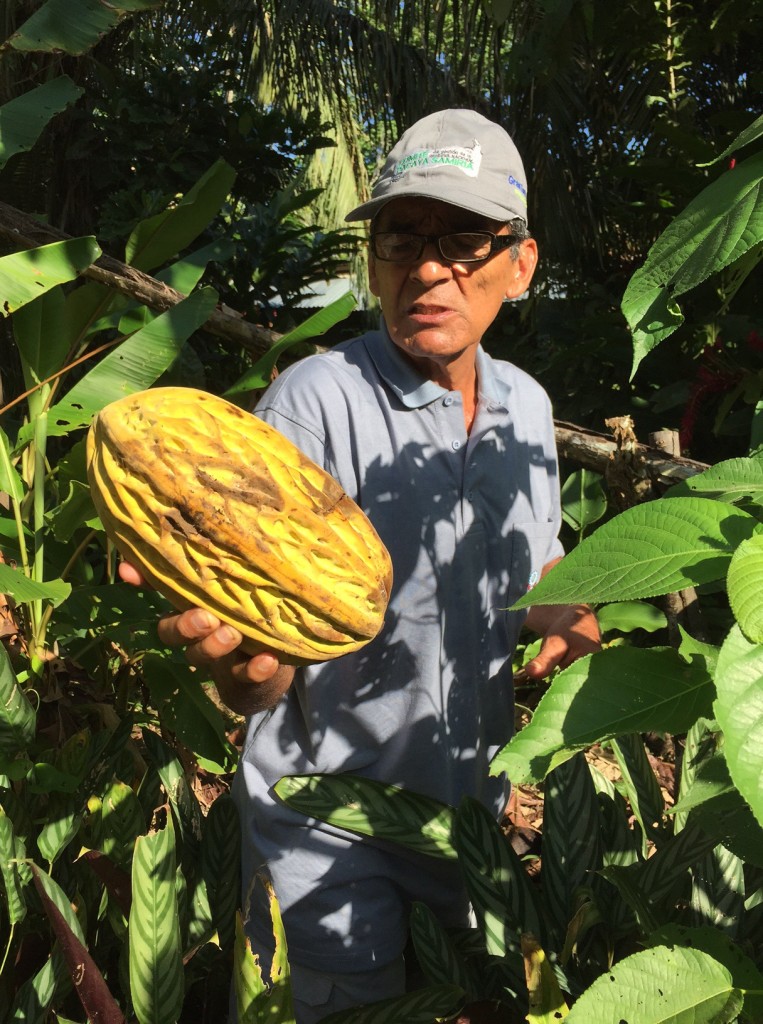 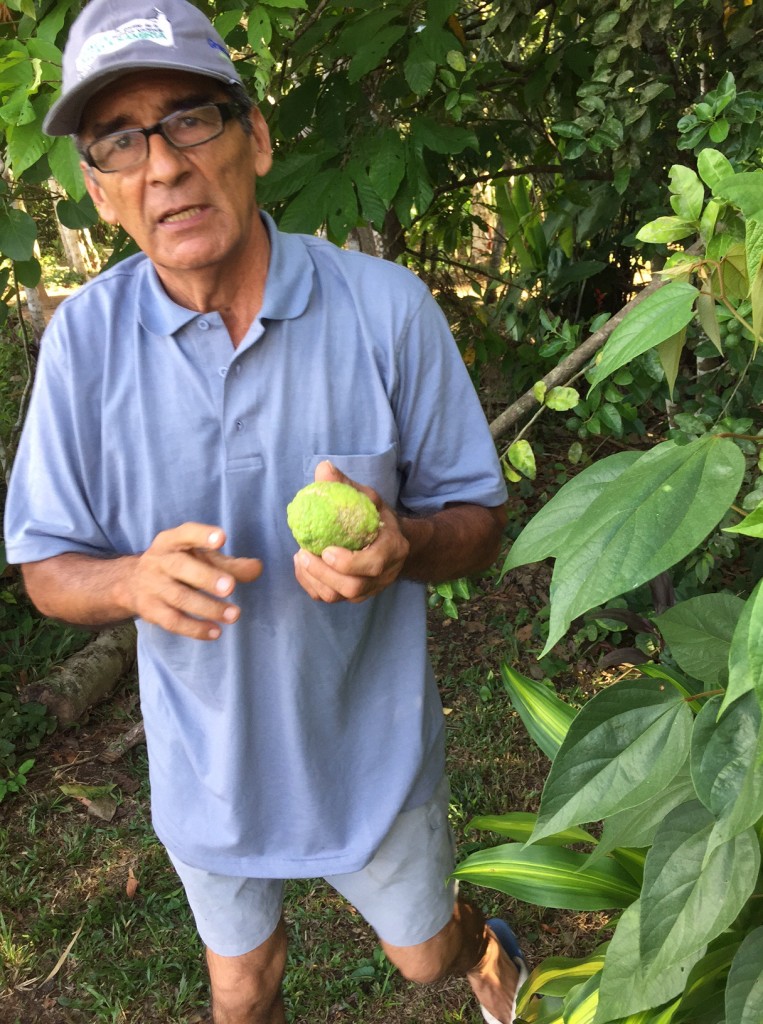 We passed by the sacred ayahuasca tree, and Victor spoke gravely about its use as a medicine. If you are not sick, however, the plant, when prepared properly by a shaman and administered during a mystic ceremony, will clean the organism of negative charges. It also cleans out your digestive system of all bad bacteria, but leaves the good. Ayahuasca, Victor says, aligns the neurons in the brain that become disorganized due to traumatic events.

“During the Ayahuasca ceremony, you are forced to face your fears, and after you have no fear.”

Victor has partaken in the ceremony five times in his life, most recently when his Shaman friend alerted him to the negative forces around him. He feared for his life due to the enemies he’s made of the dangerous illegal miners, and said the ceremony helped him survive.

He will continue to do his part, taking care of his expanse of forest and fighting for Pacha Mama’s rights, finding the beauty in the land where so many others are only seeing economic potential.

“Everything carries the mark of our hands,” he said.

*Please note that all quotes are translations.

Below are some photos of the reserve that also hosts people who want to help tend to the grounds or just stay and enjoy the beauty of the jungle. Make bookings here. 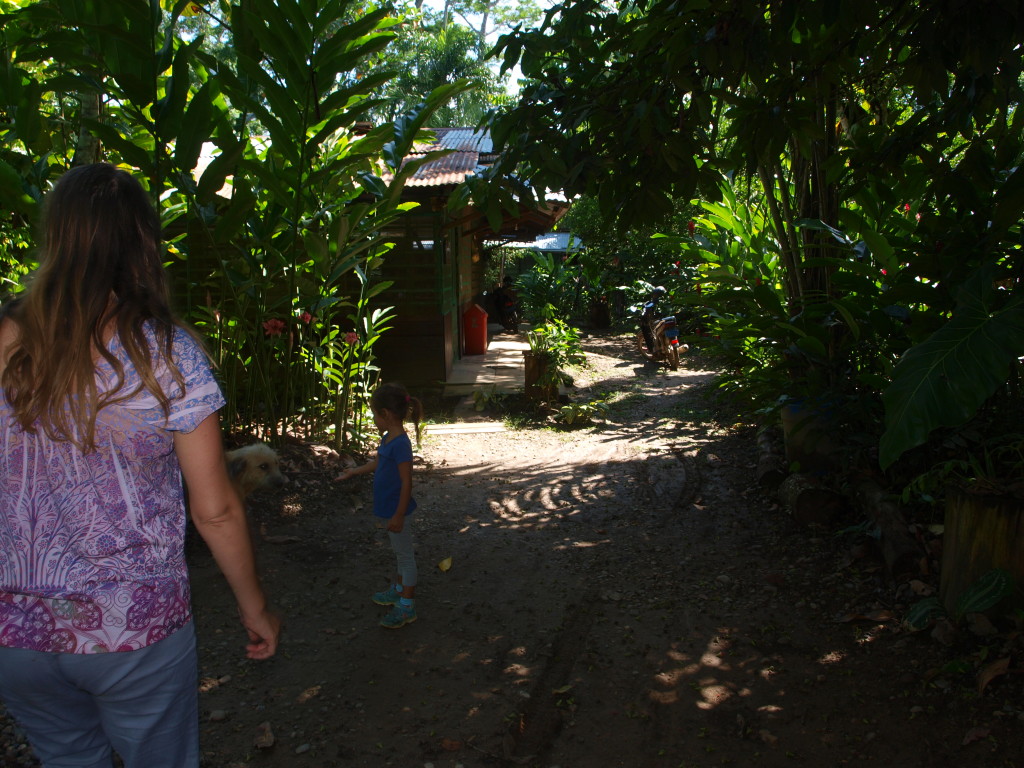 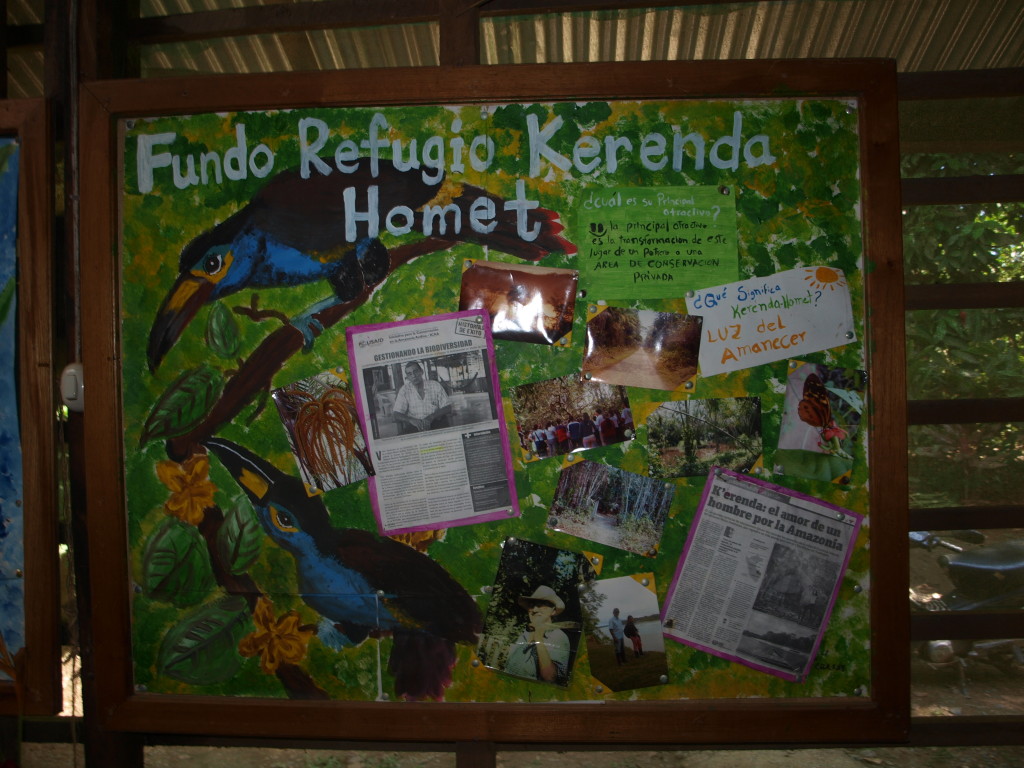 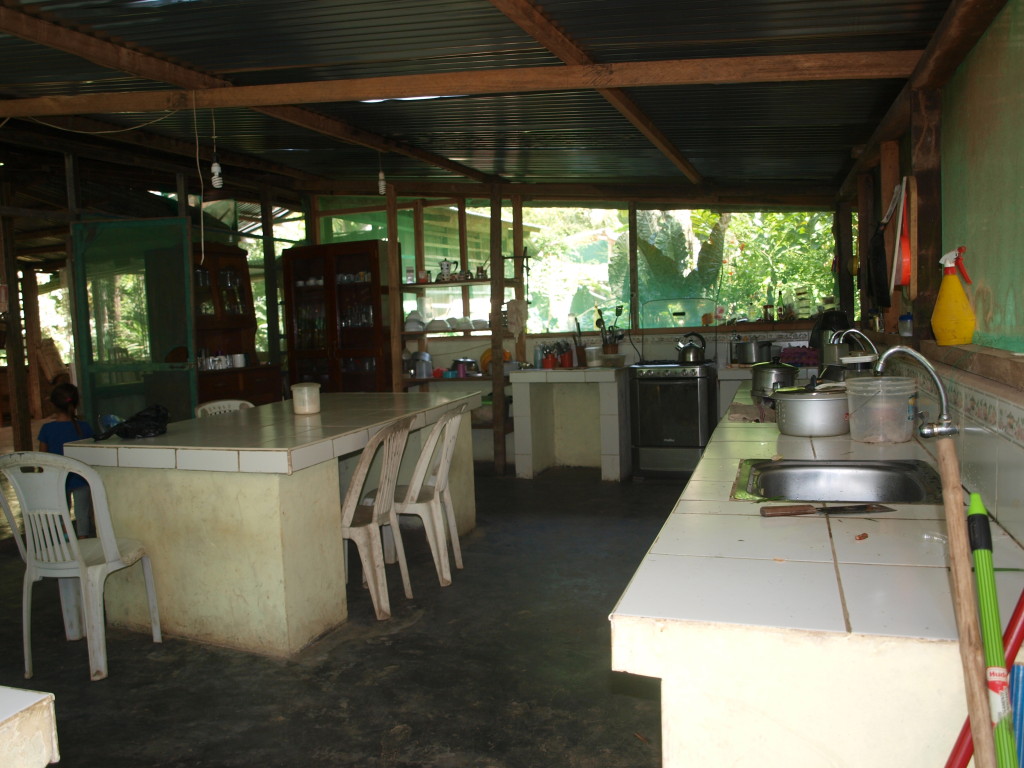 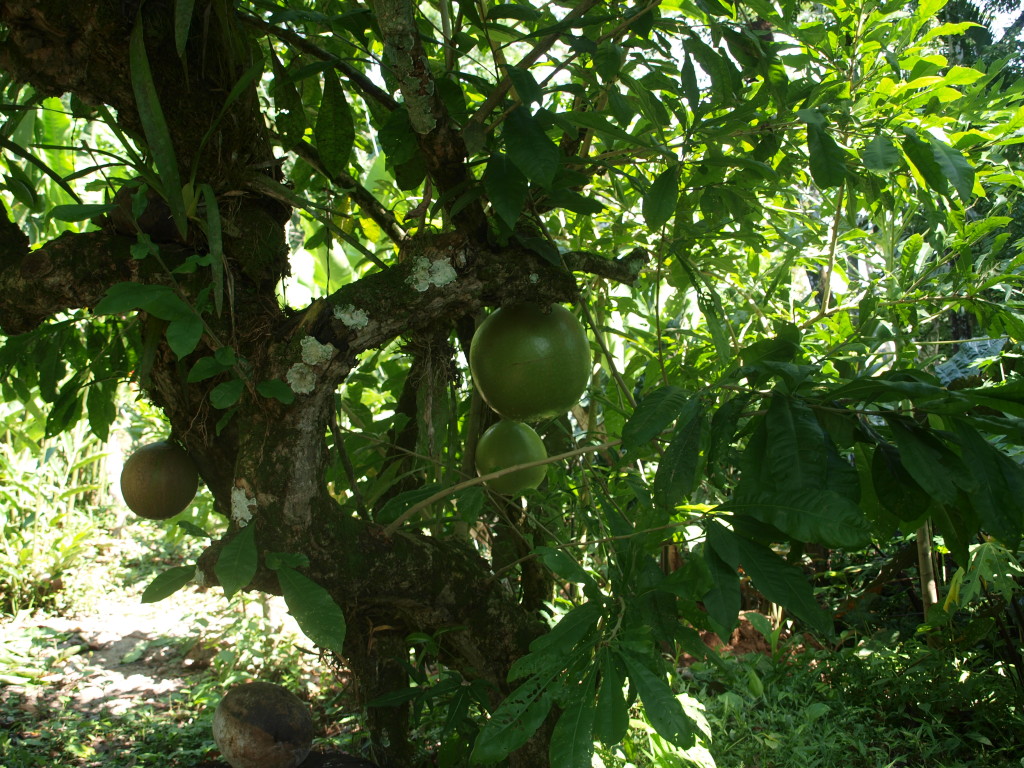 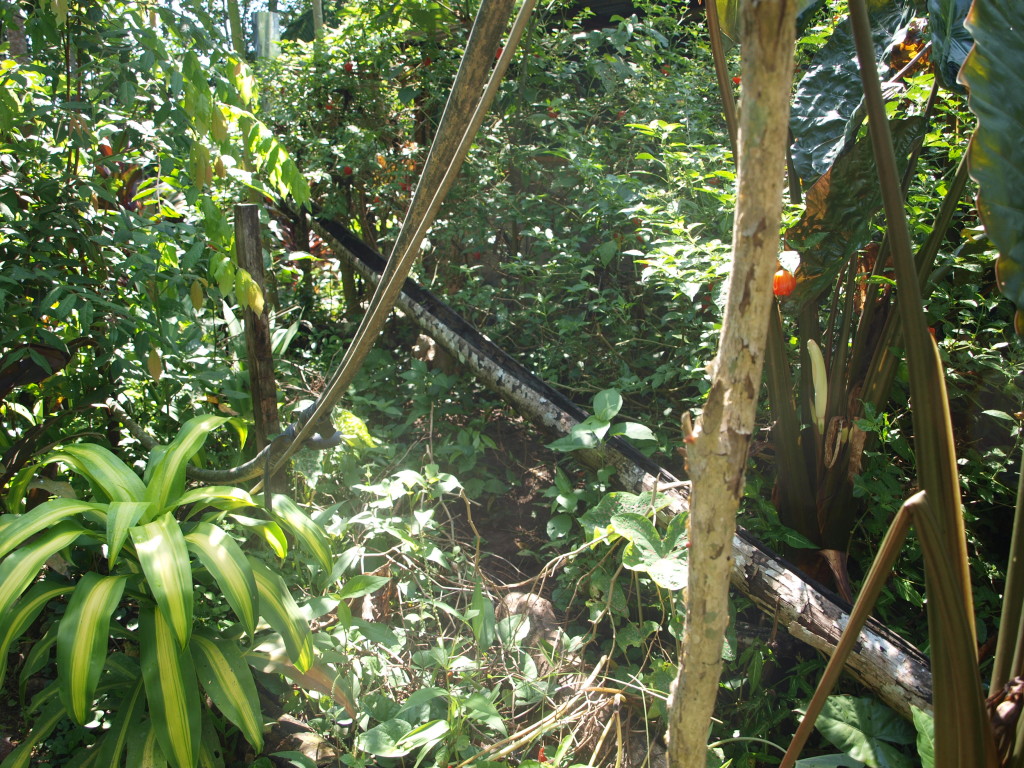 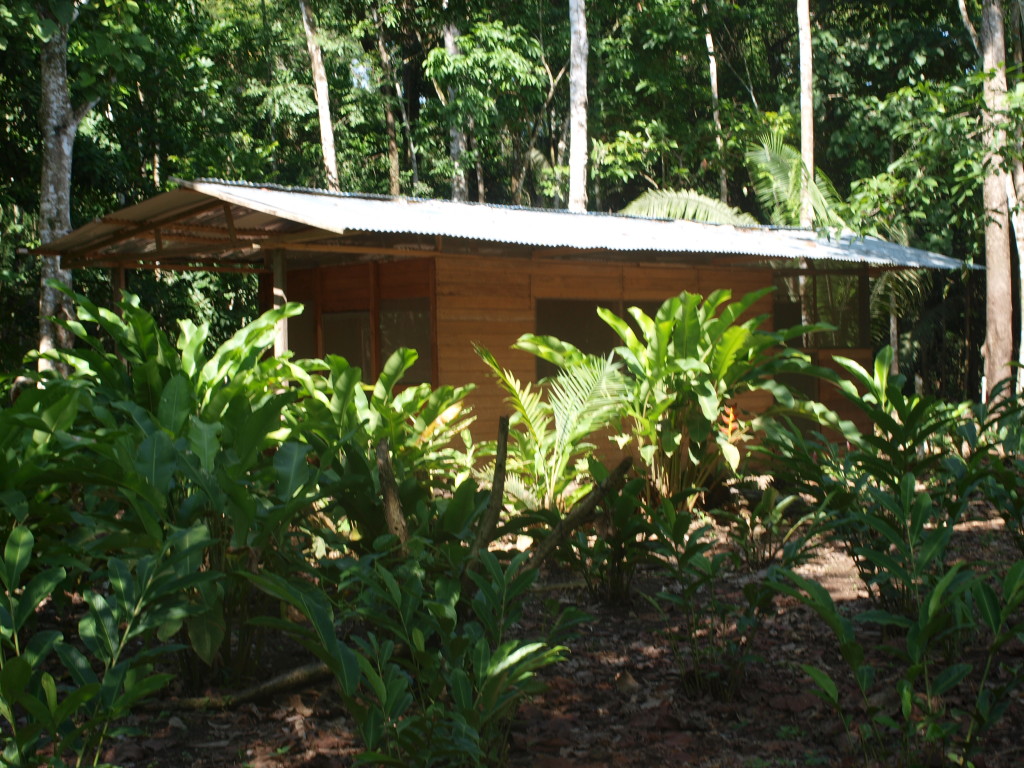 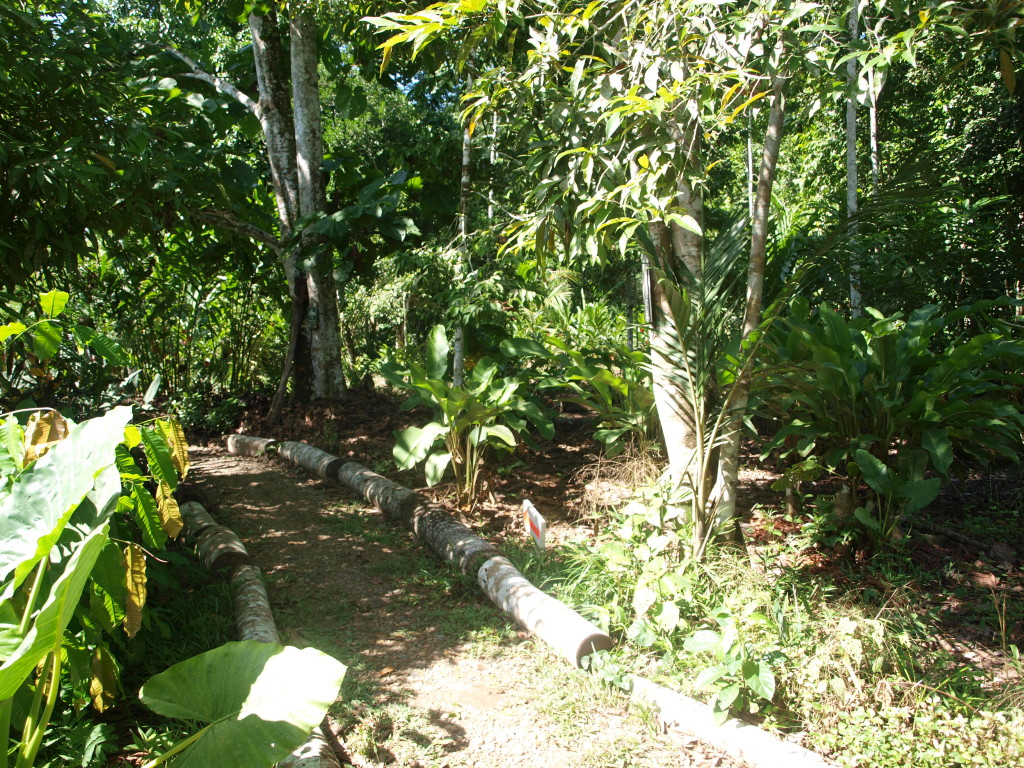 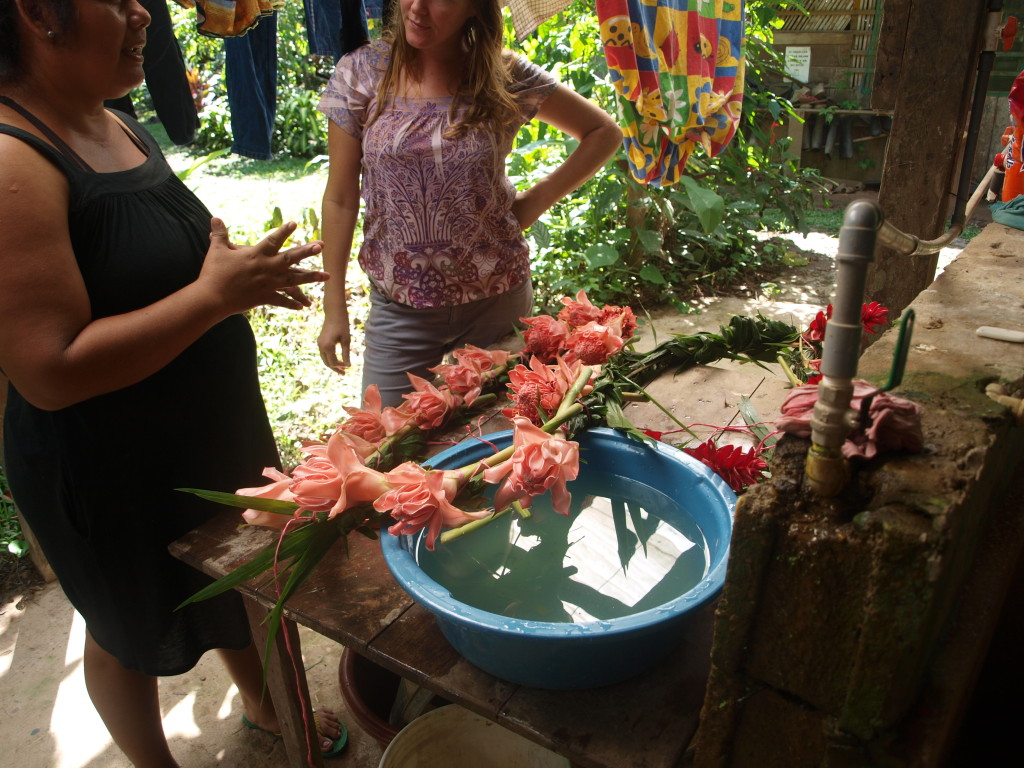 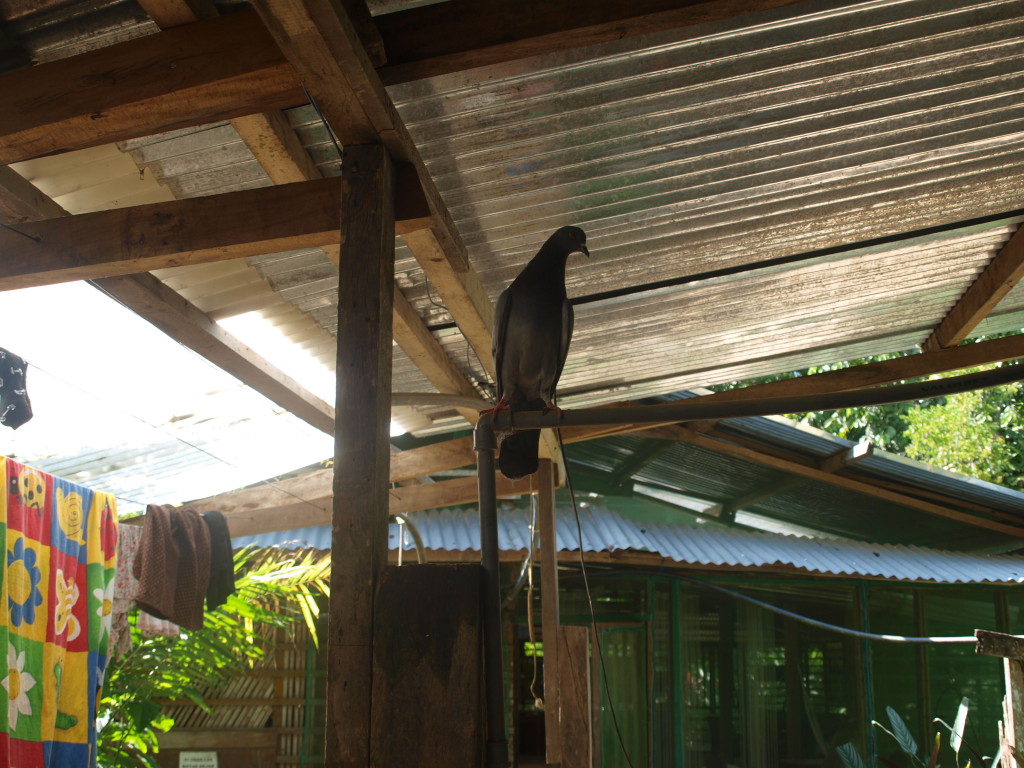 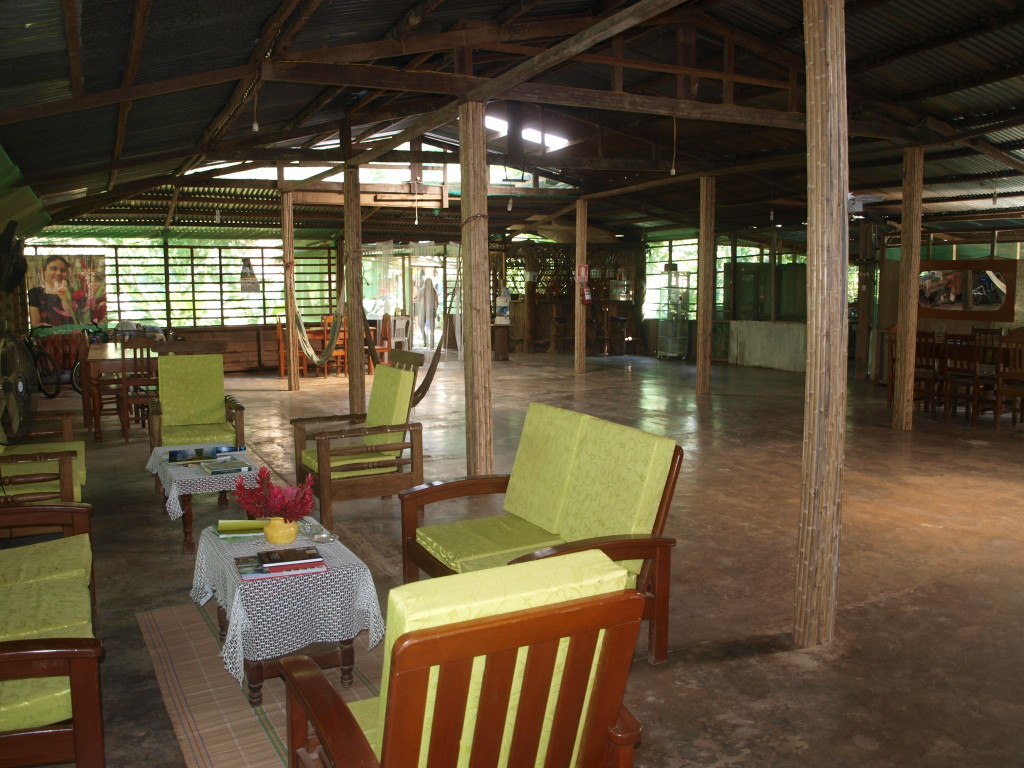 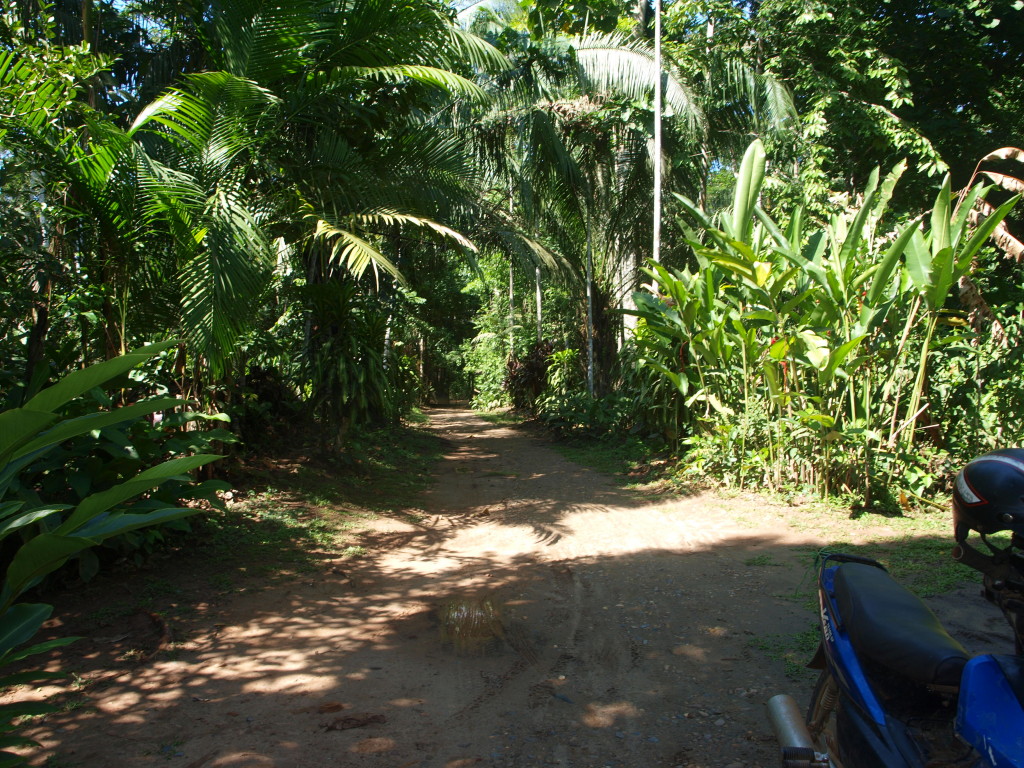