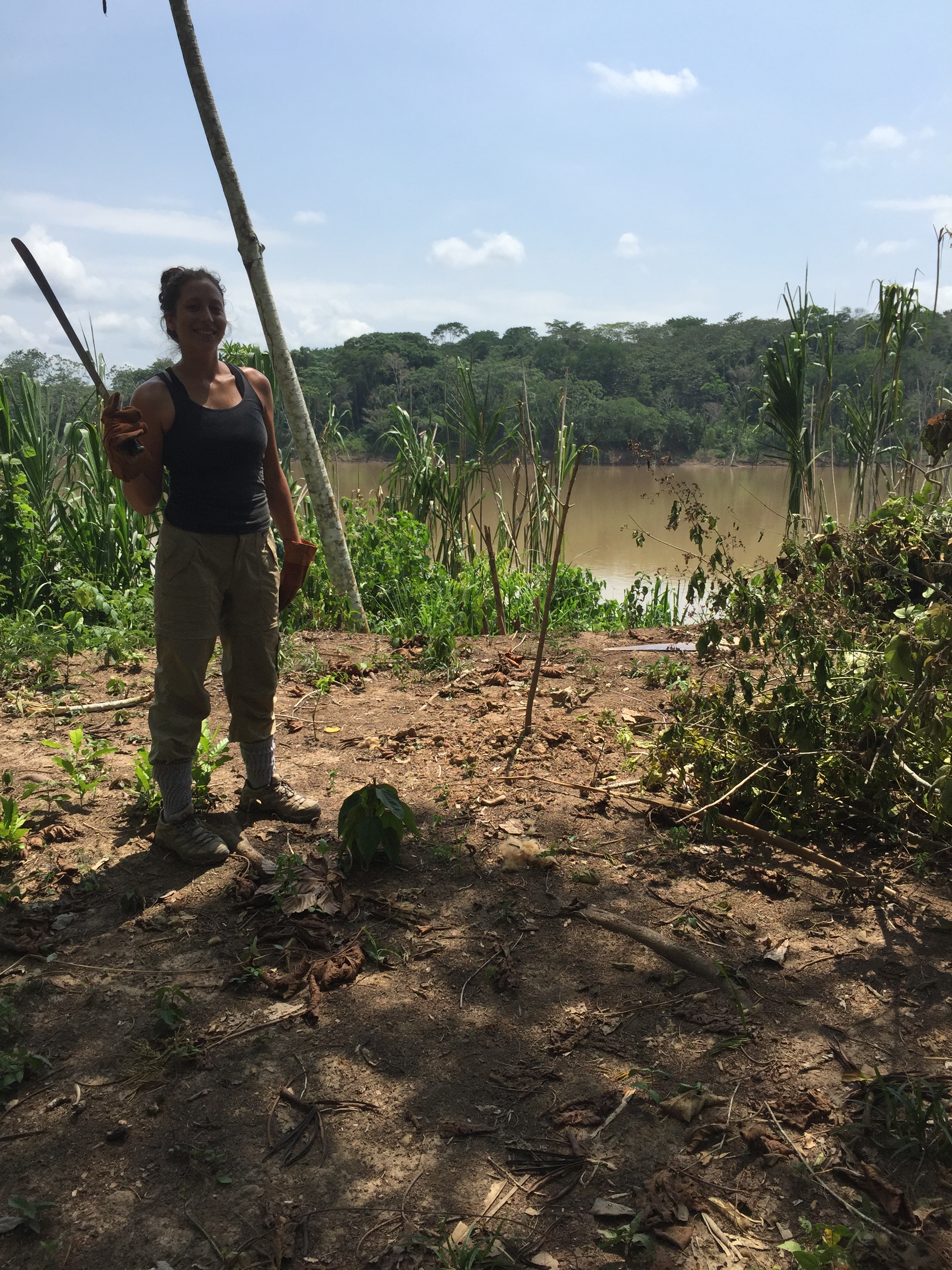 Find out what it’s like to rough it in the Peruvian jungle outside of Puerto Maldonado.

Despite the sticky heat, power outages and general lack of hygiene, my two weeks volunteering with a family in the jungle were the highlight of my time in Peru. 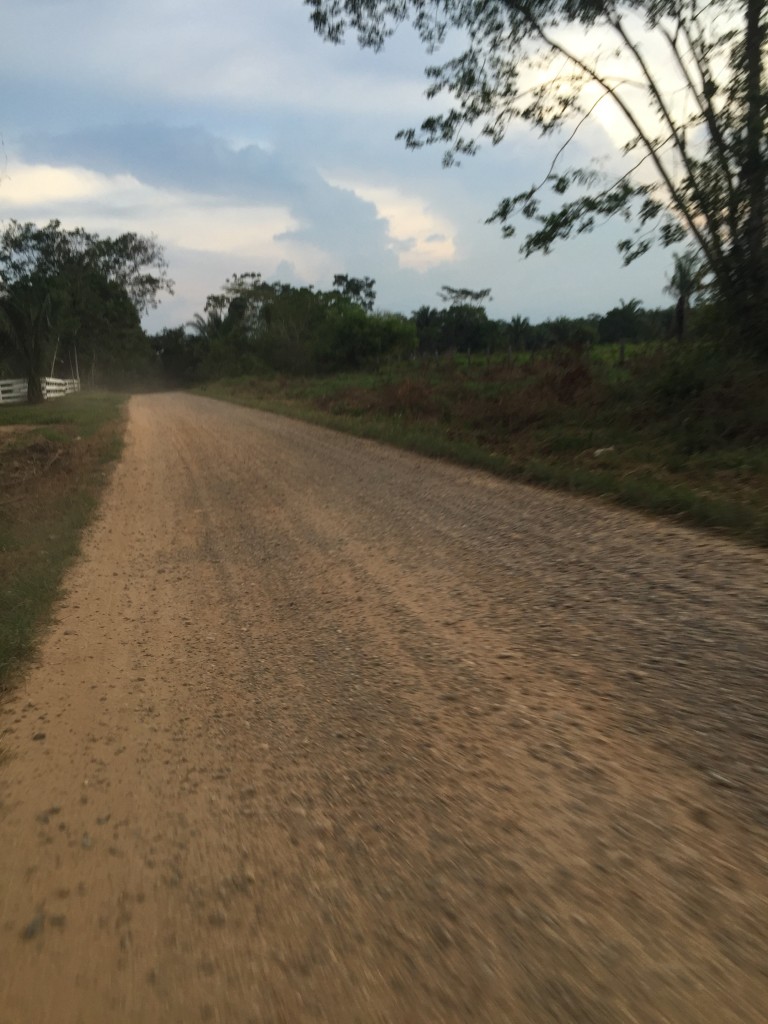 All I can hear is the sound of my borrowed moped’s engine revving, of pebbles clinking off the exhaust. In front of me, the meager bike light barely illuminates a narrow dirt road, flanked on each side by lush jungle. Behind me is pure darkness, above me, the solar system. I had long since been out-biked by my companions on their actual motorcycle, the light on the back of their bike slowly extending beyond my field of vision. I was alone, save for whatever else skulked in the night, lurking behind palm trees and around obscure bends. Was I afraid? Hell, yes. But I told myself to be cool, that this is the only road back to the house I’ve been staying at Playa Cayman outside of Puerto Maldonado, Peru, and that I couldn’t very well pass it because my fellow volunteers would undoubtedly be waiting outside for me to make sure I arrived safely. So I looked up at that gorgeous sky, I sang to myself, I experimented with gears, and I kept my eyes open for landmarks like that little wooden bridge or the km 6 sign. Nevertheless, I couldn’t shake the fantastical feeling, albeit slight, that I was about to be ambushed, either by a roam of natives who wanted to sacrifice me to their sun god or perhaps a hoard of snakes that would fall out of one of the trees to inject me with their venom. I scared myself, hearing things in the hiss of the jungle and making up scenarios like something out of a Gabriel Garcia Marquez short story, magically real. The worst that jumped out at me was a frog and a few mangy dogs.

How is it that I found myself alone on a moped in the middle of the dark Peruvian jungle? It all started out fairly mundane. We needed to go into town to use wifi, outlets and showers. Our jungle cottage had been out of power, and therefore running water, for nearly every day that I’ve been here, and I’ve been here for a week and a half. The house where I’m volunteering in Puerto Maldonado is owned by a California-native, Kristen, her Peruvian husband, Luis, and their adorable three-year-old daughter, Mar. Five years ago, they bought land on the outskirts of the city along Tambopata River, a little under a hectare of jungle, and have been slowly creating a self-sustainable home here. The couple have employed volunteers from helpx for the past eight months or so, like myself and my moto companions, Ellen and Robin, a traveling couple from New Zealand with whom I share a damp room on the top floor of the small wooden house.

This day had been particularly hot. It was Sunday, so we used it as an excuse to move slowly and not work on the house. I think I really would have passed out if they asked me to do some of the heavy yard labor that we’d been doing (only after I had given a gift to Pacha Mama/ Mother Earth to assurre her that I would do good for her land), such as digging a drainage ditch so they don’t lose their house to flood (again) during the rainy season, hacking up trees that fell after storms for kindling, collecting river water, and gardening. 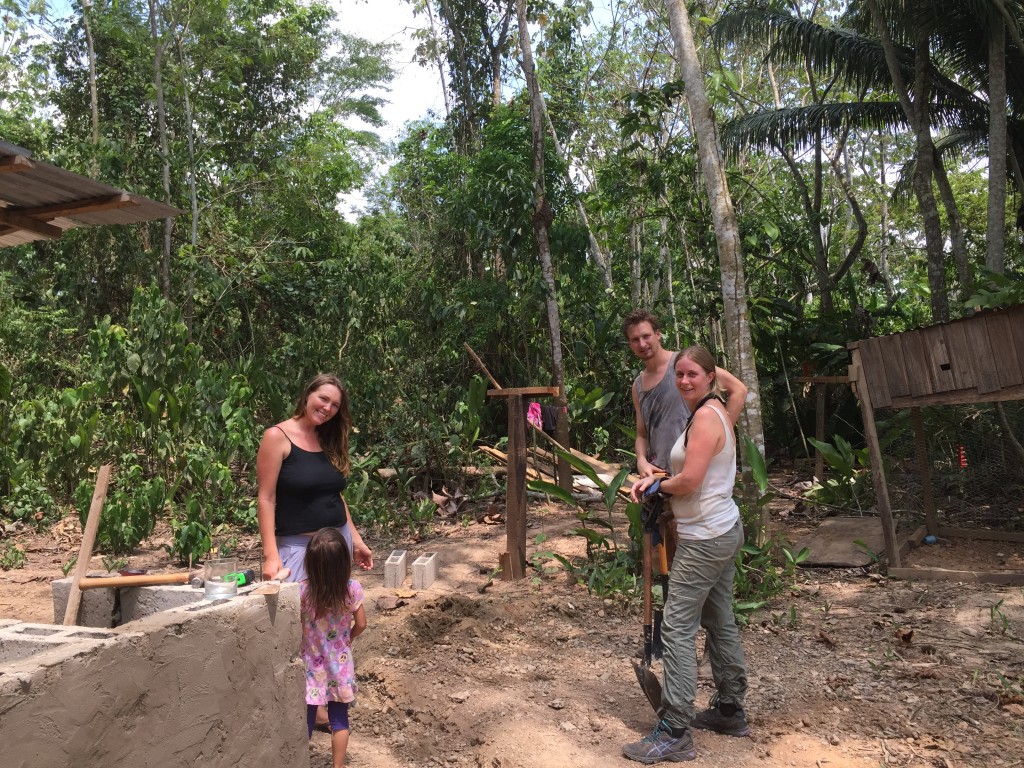 Instead, I hopped on the back of Kristen’s moped to head to town where we bought supplies for a barbeque such as two kilos of pork, some coca cola, and ice that I held, dripping and numbing my crotch and Kristen’s back, on the way home. We spent the day moving only enough to pour a cold piscola (peruvian liquor called pisco mixed with rum…try a pisco sour, too!) and keep the bonfire going to heat the grill. Some friends of Kristen and Luis’s came by with haunches of beef and some yummy, spicy Brazilian nut sauce, and took over the sweaty job of working the grill. I was thankful to the guests for cooking because I could barely cut a tomato for the salad, I was so hot.

The heat here has been nothing like I’ve experienced before, and I toured around the Israeli desert for 10 days on a sweaty bus with 40 other kvetching, hot Jews. I’ve spent hours incapacitated by this weather, lying in a pool of my own sweat on a mattress that smelled like other volunteers had done the same thing as me, melting slowly while trying to lie as stationary as a statue. I’d wait and pray for a gust of wind, please, just one blessed bit of wind to move the still air, thick like flannel on my skin and wet like the bayou in my lungs. I’d have turned on a fan, but, alas, the power has been out. It takes energy just to wipe the sweat out of my eyes. It’s inescapable. No taking cold showers for me, or sticking my head in the fridge for a second’s respite. The only solution is to go to the river, which we had done the day before, forsaking our machetes and shovels for beer and chips on the beach. 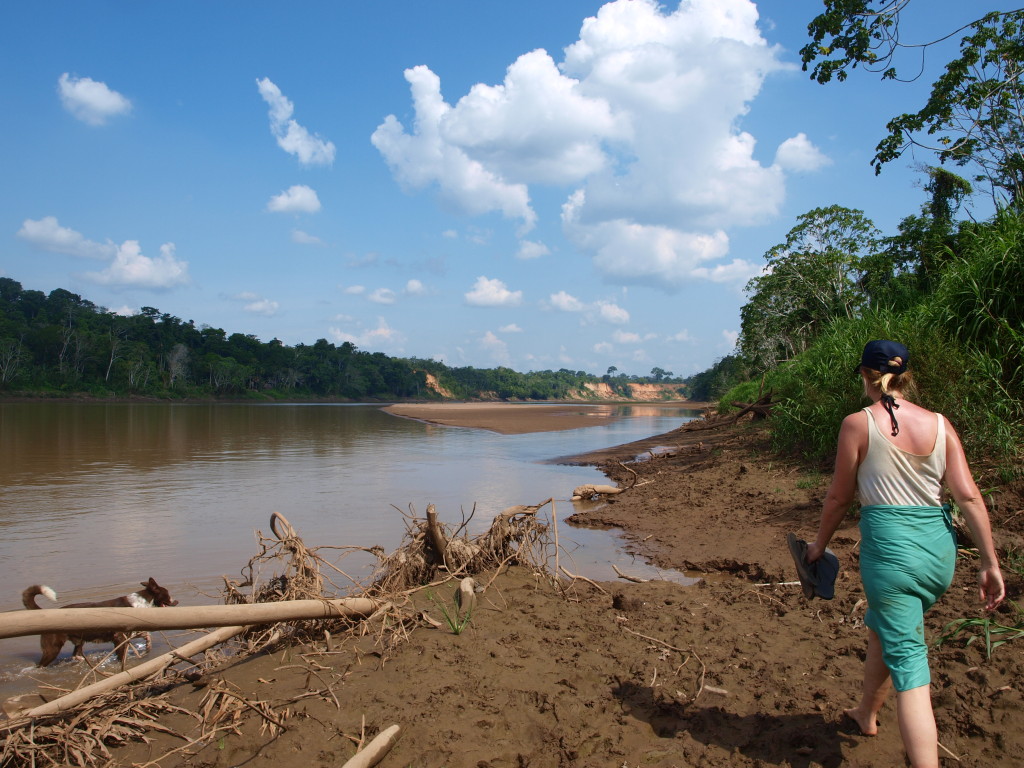 The beach is located about 100 to 200 meters away from the house, along the treacherous, muddy banks of the Tambopata. As we walked through the mud rich with minerals, we spotted cayman tracks, the local, human-hating alligator. Kristen told us not to worry about them now because they only come out at night, but I was too hot to be deterred from sinking into that cool water. 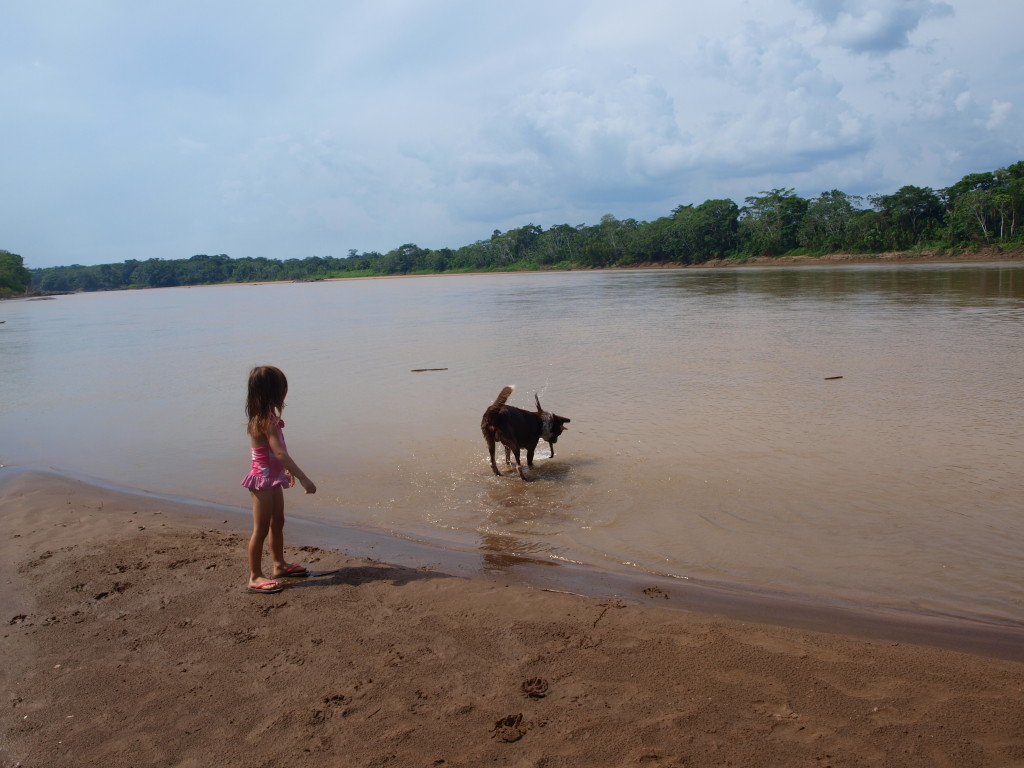 Turns out the water is not so cool, and it is very shallow, only going up to your thigh at its deepest. But the current was semi-strong, so we anchored in the mud and opened up some beers and passed around cigarettes while we weren’t playing with Mar. When the sun felt too hot, we rubbed the rich mud on our skin to protect us from the harsh rays and annoying mosquitos. When we ran out of beer we yelled up to our neighbors who apparently have a small store to deliver us some warm ones and bags of chips. It was a blissful way to spend the afternoon and bathe, and afterwards, I cooked my new family seco de pollo by candlelight.

On the day of the barbeque, however, a hot river bath just wouldn’t do the trick, and I could see by Ellen and Robin’s exhausted, sweaty faces that they agreed with me. We left the locals accustomed to this swamp to enjoy the river with their kids. Rather than hitch into town and then pay 1 sole to one of the many motorcycle taxis in distinctive yellow vests to take us across town, we borrowed Kristen and Luis’s bikes and enjoyed the freedom of riding towards a deliciously cold shower at Tambopata Hostel. I actually giggled aloud as the clean water washed away the dirt and bugs and sweat that I had been living with for four days. So worth the 5 soles. Afterwards we stopped at our local haunt, the best restaurant in the Plaza, El Asadazo, for refrescos (half juice, half water, served cold) of apple and pineapple before we set back off down the dirt path.

I am staying now at Tambopata Hostel until I leave for Cuzco on Wednesday, a place with one fan in each room, real coffee, a few hammocks, a lush garden at its center, and gloriously clean water. I was starting to get cranky with jungle life. I could have handled the lack of power and water I suppose, but you don’t realize how much you take for granted the ability to simply flip the faucet up and watch clear water come out. I could have dealt with the fact that no linen ever dried, ever, and that my light colored clothes took on the dirty brown hue of the local water. I could have ignored the bugs that tried to make a home in my hair and skin. I mean, the land was just so beautiful, the Tambopata river and Playa Cayman were my backyard, and I fell in love with the family, with Kristen’s laid back humor and high energy, with Luis’s good vibes and funny stories in Spanish, with Mar’s smile and cute voice asking for leche or to look at pictures of my perrito on my phone. I just couldn’t get over those damn roosters, waking me from my slumber at 2 am with their crowing and leaving me awake on my uncomfortable bed, seething and fantasizing about how I would kill them and feed them to the family. I can make the best out of many situations, but you fuck with my sleep, and I’m out. I also wanted to get to dry land before one of the many jungle ailments that the others had been subjected to came to get me. These include, but are not limited to, Asango/chiggers (little bugs that burrow into your skin and make you itch and burn), mosquito bites, skin and nail fungus, heat rash, parasites, botfly, diarrhea, and bronchitis. I already had migraines from the heat, possibly dehydration, a few hornet stings and some surprisingly painful fire ant bites. 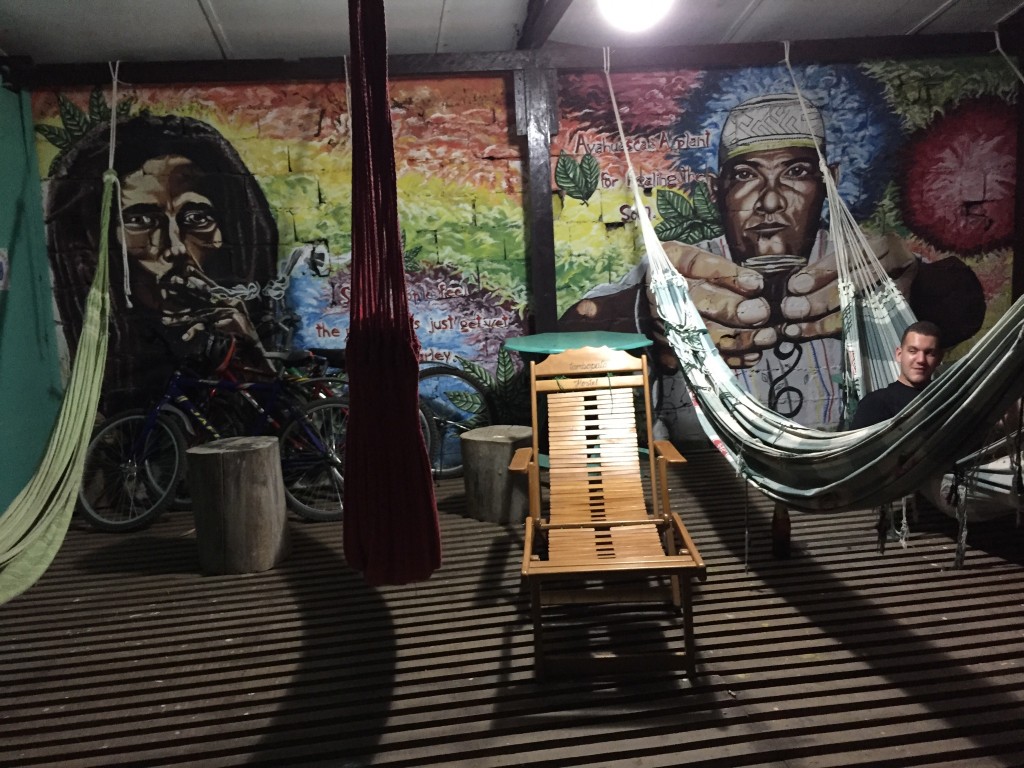 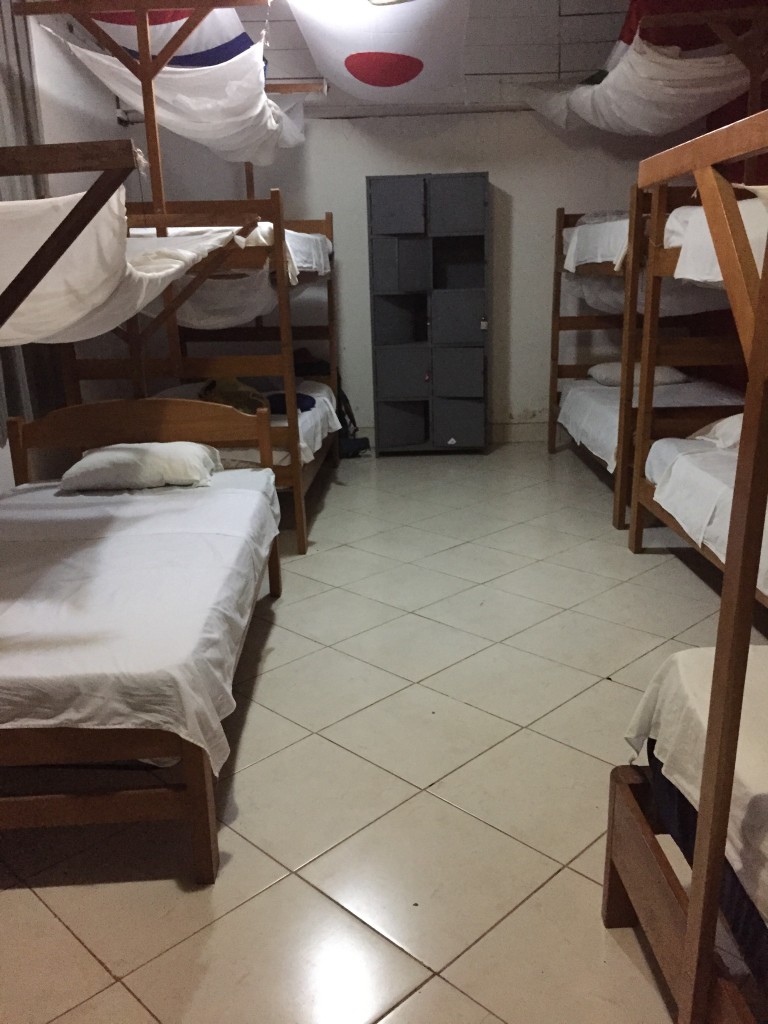 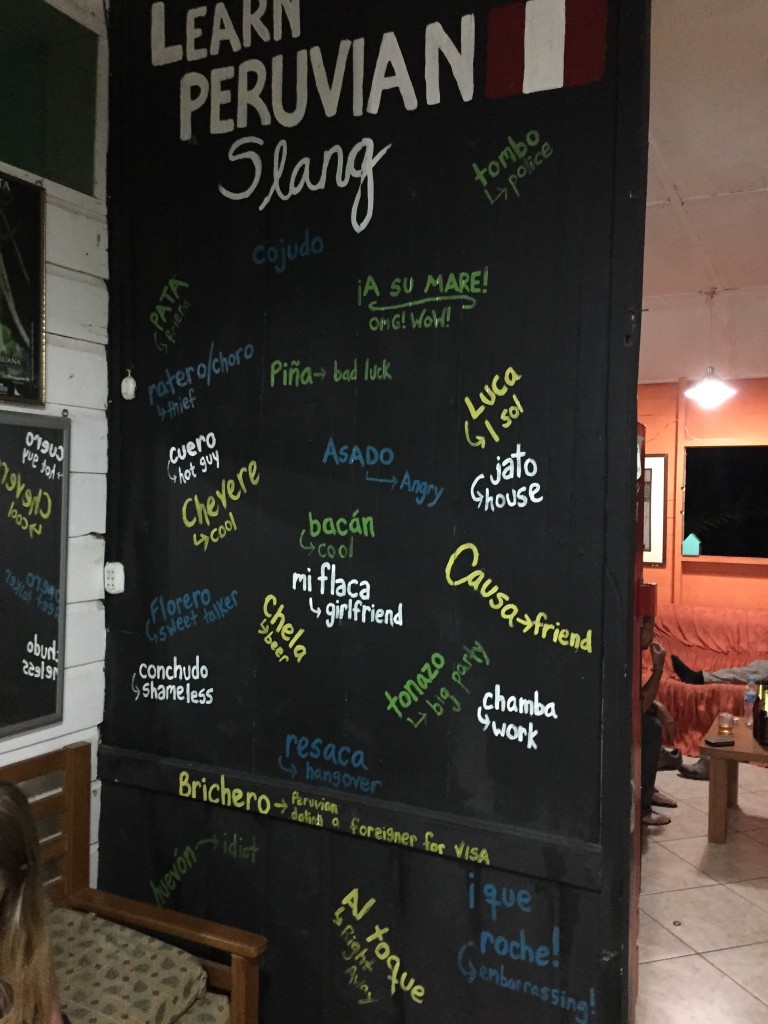 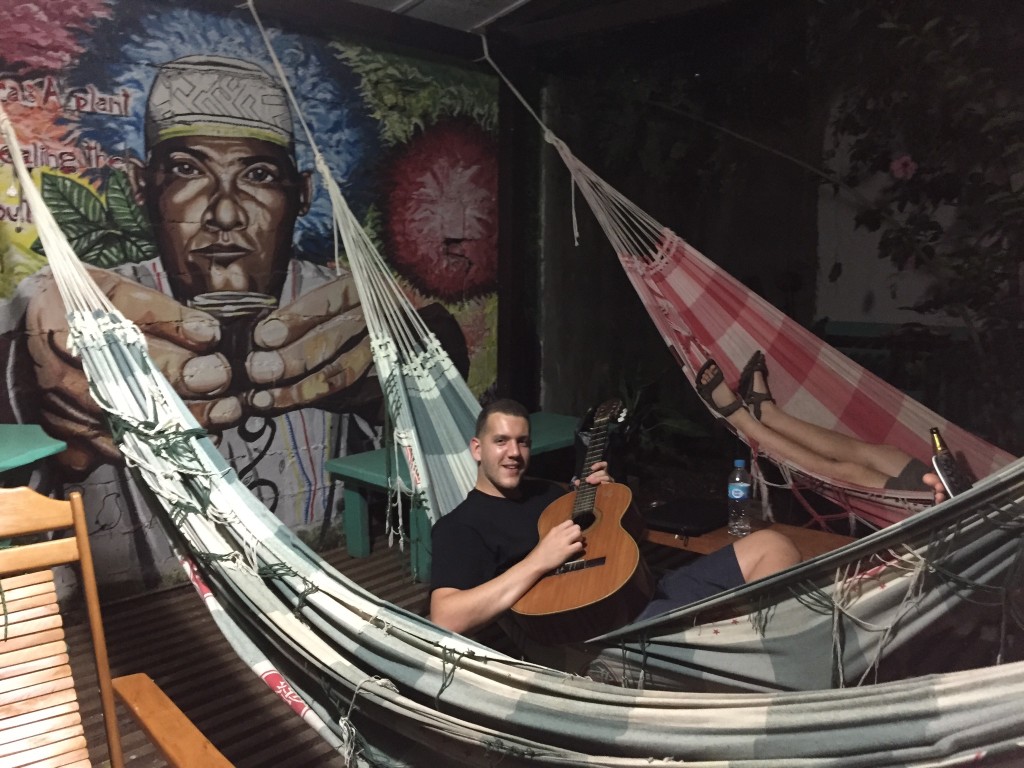 Now I’ll spend some time recuperating and getting to know this bustling little city of Puerto Maldonado.

3 Replies to “Welcome to the Jungle”