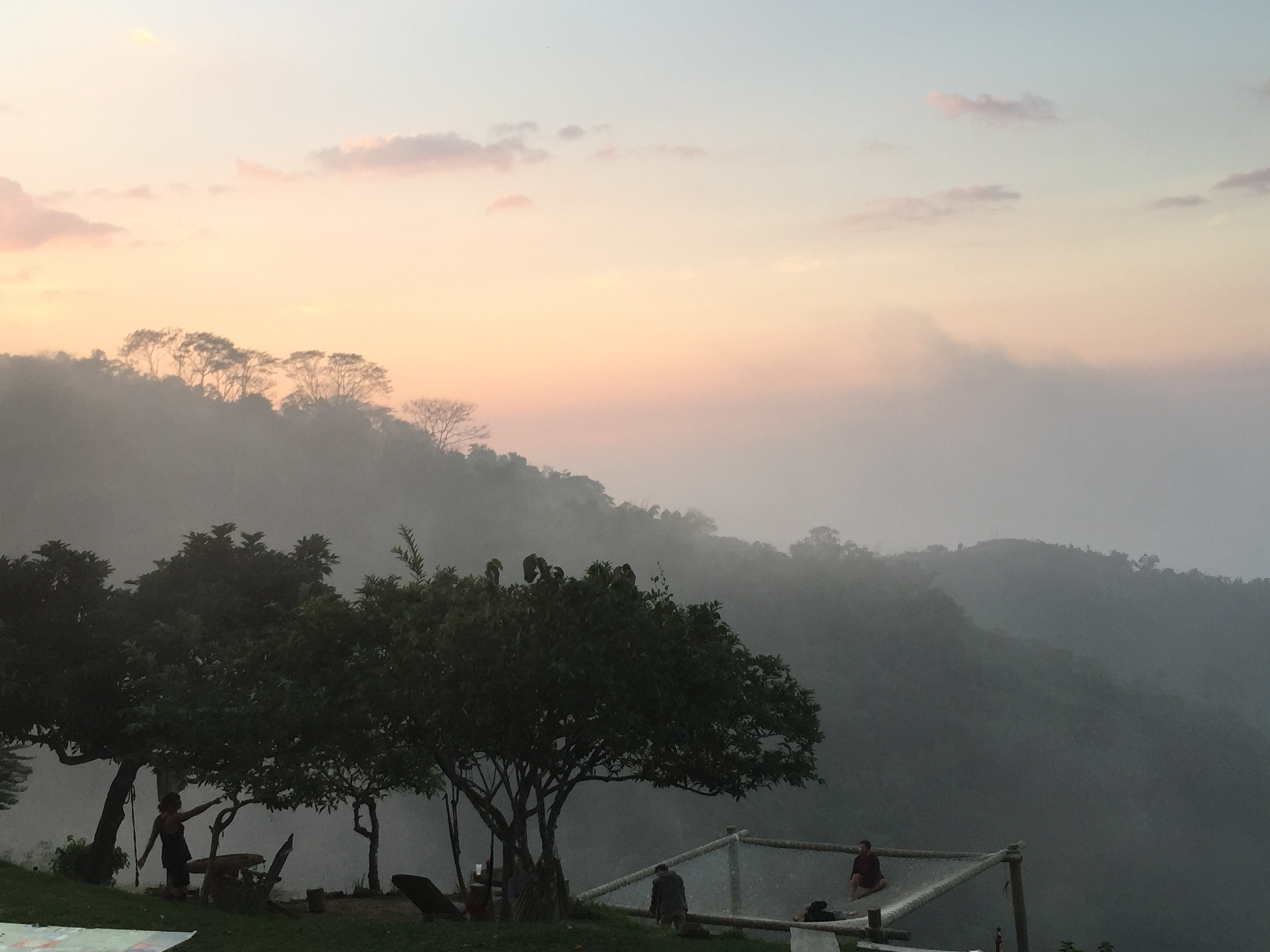 Casa Elemento Hostel lives in an untouched world in the mountains of Minca, Colombia

From the world’s largest hammock to sunrise jungle hikes, Casa Elemento is worth the trek up the Sierra Nevadas.

Casa Elemento sits perched in the green, wild mountains of Minca, Colombia. Leah, Greer, Kat and I decided to head over to the famous backpacker hostel to catch up with a friend of theirs from Australia, Alec, who works there as the chef and to see what the fuss was about. Word under the bunk beds was that this hostel offers its guests magic mushrooms to take and trip on while enjoying the scenery. We learned within minutes of arriving that it does not, in fact, offer such a treat, but more on that later.

We left our hostel, the Dreamers, in Santa Marta and took a bumpy cab ride south through the Magdalena region to the small, shabby-but-charming town of Minca. Along the way, we were stopped by police on the side of a choppy, broken road under the cool shade of the cloud forests. As our driver pulled over his brown heap, we all hurriedly stashed any money or drugs in our bras and prepared our sweet Gringa smiles for the inquisitive pigs. Turns out, the cops were only looking to have a little fun, and they joked with us and commented on how beautiful our passport photos were and warned us about sand flies up at Casa Elemento before they sent us on our way.

The small corner of organized town-ness that I could see in Minca held little more than a restaurant and hostel or two, a few convenience stores, and about 20 motorcycle riders vying for the attention of any tourist whom they could charge for a ride up the mountain to the hostel. As eager faces and oil-stained hands tried to pull me in the direction of their individual bike, I was reminded of the time in Cusco when colectivo drivers competed with their peers to win more bodies in their vans to Ollantaytambo. Instantly over-stimulated and frustrated, I walked away from the group that was harassing me in a huff and found a driver standing off to the side, bothering no one, and asked if he’d be so kind as to take me up. I paid him his 15,000 pesos as I straddled the seat of the bike. I’ve learned that it’s always best to pay the agreed upon fare before the ride begins, not after you’ve arrived. Many drivers will take it upon themselves to charge you more at the end of the journey, guessing that you’d rather just pay up than have a confrontation.

So there we were, the four of us giggling under our helmets and mounted behind some locals. The ascent was curvy and steep, but my driver was up to the task, expertly balancing on thin pavement when there was any, dodging potholes, and easing us through the sucking mud. I tried to move with the bike and lean forward as much as possible to make it easier for him, and he told me he appreciated the effort and even offered to let me drive, which I declined. It wasn’t long before my whoops of pleasure at going fast around bends and hilarious cackles resulted in my driver and me being far ahead of the group. I could tell he was happy to have a friendly, Spanish-speaker who liked to ride fast behind him.

The air on the mountain where Casa Elemento sits was thick with moisture, but still impossibly fresh. A tall barefoot American with sandy blonde hair and aviators on greeted us and pointed through a sort of sunroom to the outdoor bar where we could check in. When we called to make the booking, as there is no internet or Wifi access up there, we were told that only two of us could have beds and the other two would have to sleep in hammocks. Kat and I opted to take the hammocks- I had never slept in one and felt like I should before leaving South America, and she just didn’t mind them. While we were ordering up our first drinks of the night and inquiring, to no avail, about mushrooms, we ran into more than a handful of travelers we already knew from other hostels, which wasn’t shocking considering the popularity of this particular lodging.

While we didn’t find mushrooms we did find much more: a paradise in the sky. The commune-esque hostel boasts being the home to the biggest hammock in the world. The girls and I couldn’t wait to take our drinks and lounge on the giant net, to hang seemingly over the edge of the world, swatting away the millions of sand flies that apparently lived and reproduced in the ropes of the net. 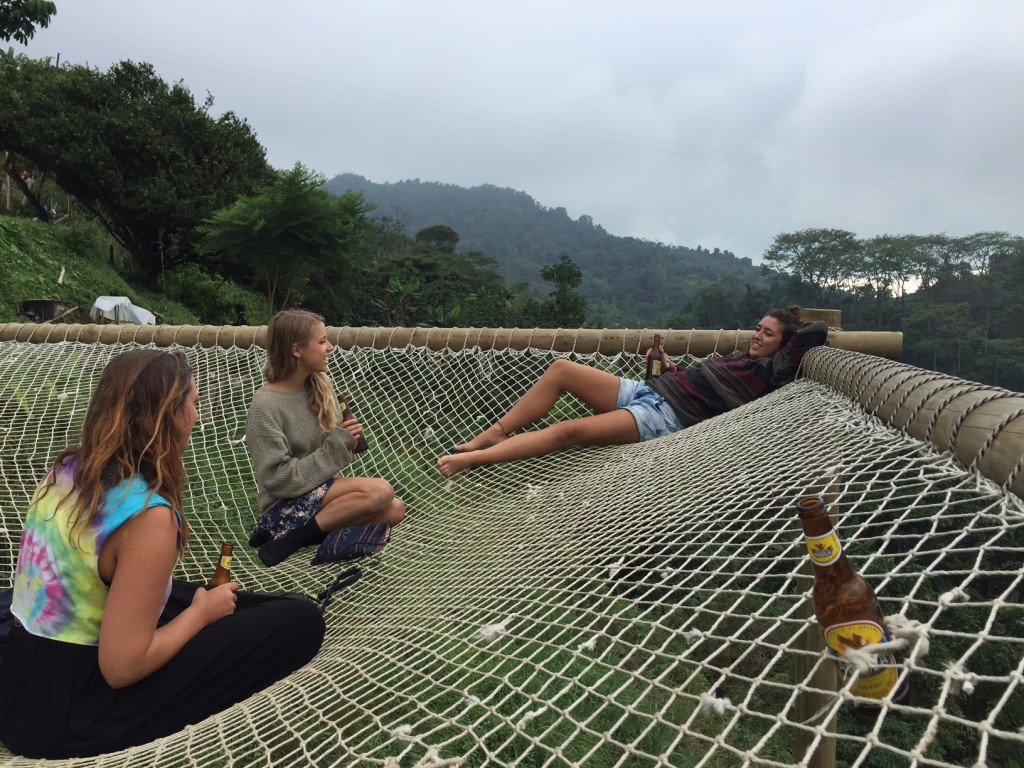 The night was relaxing and peaceful. We drank and smoked and laughed. We traded stories with other travelers around a campfire, crammed together on the hammock in the tree house watching people shower below us, itched our bug bites and ate whatever Alec dished out for lunch and dinner. I don’t remember what we talked about. All I remember is feeling blessed to be where I was. 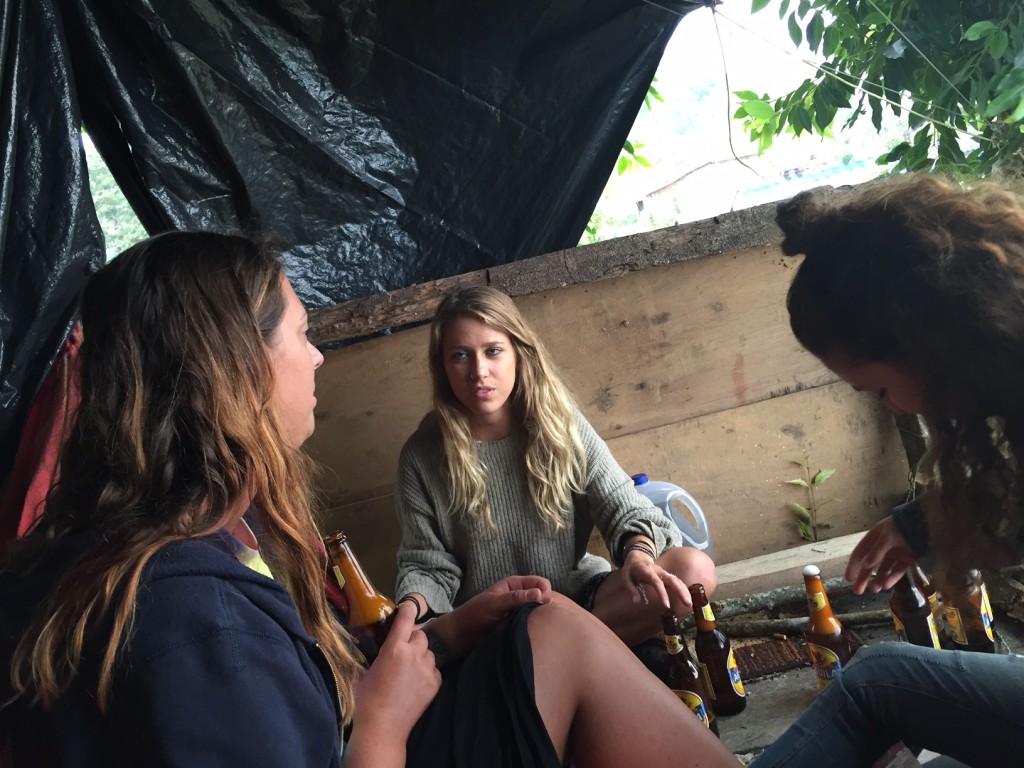 When the time came to go to bed, I found myself a hammock that had been strung up in the aforementioned sun room, covered myself in every bit of clothing I owned and any blanket I could find, and swayed myself to sleep. I woke up early the next morning and went to use the outdoor toilet in a room with three walls— the missing wall reveals the beautiful scenery of the Sierra Nevadas. As I walked barefoot back from the bathroom, I noticed that people were asleep literally wherever they could find a comfortable spot. One couple had dragged a mattress onto the giant hammock and were sound asleep there. Another couple was sharing the hammock in the tree house. Someone was floating in the water, all of the sunroom hammocks were taken, as well as any spare couch or cushion inside. It felt hippie-like and homey, and made me feel comforted that everyone here had made this place their home for the time being.