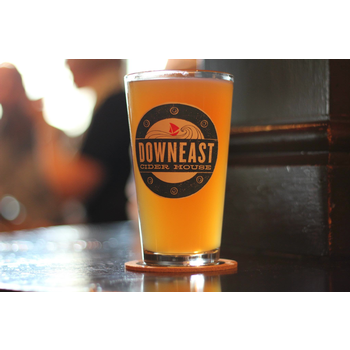 At the Downeast Cider House, you can find out just how that delicious, cloudy beverage is made.

From fermentation to canning to tasting, you’ll get your fill and more with a tour of the Downeast Cidery.

Upon receiving your first pour of Downeast Original Blend Cider, sounds of shock and delight are bound to follow. Just looking at that cloudy, orange liquid is enough to make your mouth water in anticipation of an unexpected sip, something apart from the Magners or the Angry Orchard ciders you are accustomed to drinking. That first mouthful of Downeast takes your senses on a journey, back to a crisp October day apple picking with your family as a child and enjoying the local farm’s cider with a basket of fresh-picked apples by your feet. You down the glass immediately, smacking your lips and thinking, That was tasty. Why, I’ll have another. A similar experience ensues as you polish off your second glass, and only then does it hit you that you are indeed consuming an alcoholic beverage.

As a server in a rather touristy area of Boston, I find myself recommending the cider over our other choices to my guests. “Ever had Downeast?” I’ll ask. “It’s really good. Unfiltered. Brewed locally just across the harbor (pronounced ‘hahbah’) in Charlestown (pronounced ‘Chahlestown’).” My patrons, hearing the word ‘local’ almost always jump on board and order a pint, followed by the aforementioned squeals of approval. Unfiltered? Brewed locally? How quaint. How very New England.

Well, I had had enough of just telling people that the brewery (cidery?) was so close by, so I decided to check it out for myself and purchase a Living Social for an affordable tour of the brewery plus two Downeast pint glasses and a down payment on a growler of cider. Whatever that means.

The cidery resides underneath the Tobin Bridge, which thoroughly confused later Uber drivers who couldn’t quite figure out our pin point location and found themselves crossing the bridge and canceling the trip.

The large warehouse opens unceremoniously in the front, a sort of deck with a small game of corn hole serving as a foyer before the entrance to the building. A smiling girl in a cool Downeast t-shirt welcomed my cousin Faiez, his girlfriend Alex and me to the brewery from behind a fold up table.

In the background, I could see the titan-like, gleaming silver fermentation tanks lined up like guards.

The smell of fermenting apples hit my nostrils with my first step into the warehouse. “It smells like an apple with a yeast infection,” I exclaimed to Alex, making her laugh with agreement. The atmosphere at the brewery was pretty laid back. Thin, pale employees walked around cheerfully, either leading tours or cleaning growlers or pouring drafts at the bar around the corner. Visitors rested their fresh drafts on barrels and munched on free bags of snacks or sat at the games table to play Jenga or miniature finger Twister.

Apparently this whole area serves as an office during the week, and opens up as a bar on the Fridays and Saturdays when tours commence. As we waited for our tour to start, I nibbled on some of their spicy apple ginger cookies and bought a few rolling papers with the Downeast logo on them.

A nice young woman with thick glasses and a sarcastic yet chipper demeanor led our tour. She explained to our group of about 10 eager drinkers that the founders, Tyler Mosher and Ross Brockman, started making their famous cider out of their dorm rooms in Bates College in Maine because they wanted a cider that actually tasted like fresh pressed apples.

So, in 2011, after college, they kept bottling the stuff in Waterville, Maine until 2012 when the worst harvest of apples hit their home state. So they moved to Massachusetts where the apples were still growing and settled up in Leominster for about a year. Eventually, Ross’s brother, Matt, found the current Charlestown location and became co-owner. The Charlestown spot has a maximum capacity of eight fermenters that it meets with fervor, producing that delicious original blend plus many other variations of hard cider, both filtered and unfiltered. The secret to their unique flavor? Rather than using a champagne yeast in the production of the cider, they use an ale yeast because it holds the flavor better.

Like at any brewery or distillery tour, the tour guide explained to us how the stuff was made. The apples are fermented for two weeks, during which time they produce carbon dioxide, alcohol (yay!) and heat. The optimal temperature that the workers there look for is 68 to 72 degrees Fahrenheit. The cider is then cooled by glycol tubes and then after another two weeks, the temperature drops to 32 degrees so that the yeast goes to sleep and sinks to the bottom. This yeast is then removed and reused for future batches, because yeast is expensive. The remaining cider is then flash pasteurized at 115 degrees to kill any lingering yeast that might cause the cider to continue to ferment. Then the cider chills out in some artsy cool holding tanks until it’s ready to be canned, at which point they’ll add a bit of CO2 back in for some fizziness.

Next, our tour guide walked us through the canning process. Why cans? Because they are cheaper, lighter and easier to ship, and because they have a light and air tight seal, which means that there is neither room for oxygen to sit and nor any way for light to enter and ruin the cider, making it taste like wet cardboard. The cans idea was also an homage to Maine college boy life, where hunting and going to the beach are a weekly habit and bottles are banned from both of those scenes.

Our group got to taste Downeast’s delicious Original blend, their Cranberry blend, made with 10% fresh cranberry juice, their hard lemonade and their Unoriginal blend.

If you’ve been paying attention, you might guess that the Unoriginal tastes like the other brands. I guess they caved and made a cider fermented with champagne yeast to give it that drier taste that nobody I know loves. As our tour guide said, “It’s unoriginal because it’s how everyone does it.”

Later at the bar, I sampled the sweet and rich Maple Oak blend, a specialty blend that’s made in their two original, old school fermenters from Maine, complete with heating pads plastered to the sides and an opening at the top to cool the brew. This just goes to show that the employees at Downeast take the proper amount of time and give a little extra effort to create fresh flavors for their fans. Demand is so high, in fact, for all their blends that they are currently looking for a new warehouse that can fit additional fermenters so that they can expand their blooming business.

“Locally grown, fresh pressed, gluten-free, not from concentrate.” The way cider should be, indeed. I know it’s a hike, but it’s worth it for a sweet taste of that New England nectar, straight from the source. Keep an eye out for their specialty brews like their hard honey cider and a pumpkin blend coming in the fall!