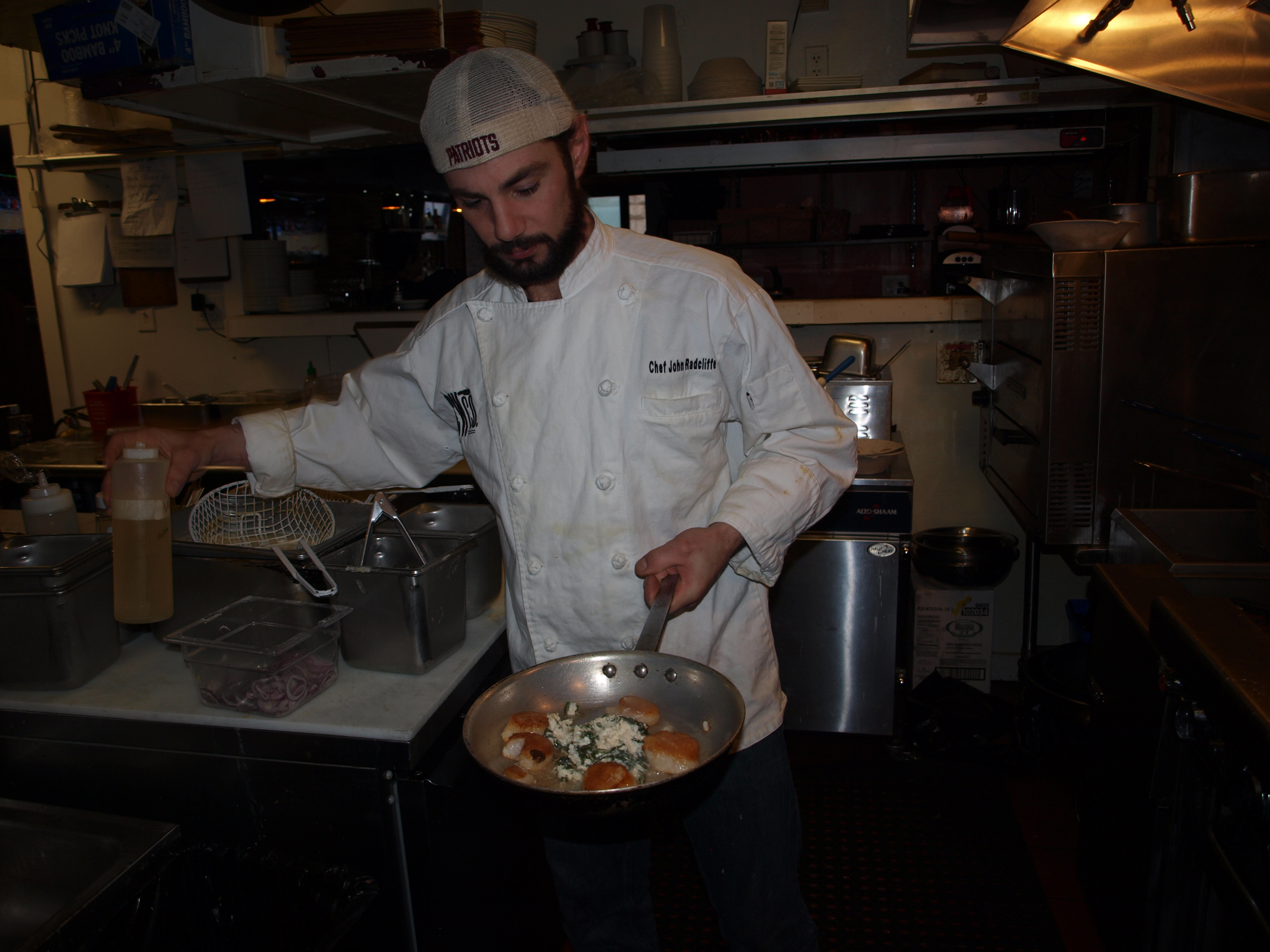 “Hey! ¿Qué pasa, man? ¿Todo bien?” says John Radcliffe, head chef at Central Wharf Co., on any given day as he greets his coworkers in the kitchen. The wiry chef, 31, wears his shoulder length brown hair in a low ponytail and his white chef coat a little wrinkled. A friendly smirk lingers on his bearded face as he describes to the wait staff in detail the special he’s prepared for the day, Scallops Florentine, broiled with shallots, spinach, herbs and Asiago cheese and finished with cornbread crumbs.

A Massachusetts native who has bounced around the American culinary scene, working under chefs like Roxanne Klein in California and Chris Schlesinger in Westport, Radcliffe is on the rise in Boston and determined to make a statement about sustainable local flavors with refined and inspired twists.

While John has a strong culinary background that ranges from preparing a traditional clambake on the beach to creating a ponzu demi-glace for blackened tuna tartar, his New England roots remain a strong influence and base for his cooking. You can often find him before the restaurant’s rush in the prep kitchen, two hands grasping a giant wooden spoon, stirring a large, steaming pot of New England clam chowder, which he makes with homemade mussel stock among other wholesome ingredients. This fragrant, creamy stew was one of the first things John learned to cook. As a boy growing up in the south shore of Massachusetts, specifically New Bedford, Dartmouth and Westport, John would dig up quahogs and mussels with his father, “Ragtime” Jack Radcliffe, grind them in an old-fashioned meat grinder, and make chowder with them.

“I love the ocean,” said John. “I think that comes through in my food and from my roots.”

Radcliffe’s style of cooking is usually seafood based, like any good New Englander. However his varied culinary experience adds a fun, creative, upscale element to his plates.

“A lot of my creations are stemmed off New England flavors, but they’re not New England style at all,” he said.

For example, one popular dish on Central Wharf’s winter menu is called “Goldwater vs. Rockefeller.” Oysters Rockefeller are a traditional broiled oyster with rich, Ritz-cracker breadcrumbs, bacon and butter. John likes to “play with new flavors,” so he created Oysters Goldwater, broiled with horseradish, blue cheese, artichokes and cornbread crumbs, to see how the two stack up against each other.

“Barry Goldwater was the 1964 Republican candidate who put Rockefeller out of the seat,” said John as he maintained perfectly polite eye contact. “Goldwater beat Rockefeller, so I’m hoping that my Goldwater oysters will become more famous than Rockefeller’s.”

While Radcliffe has worked erratic, 50-hour weeks as the head chef of Central Wharf Co. for nearly two years, and as a head chef in general for nine, he has been working and learning in kitchens for 17 years. When the young chef was 14 years old, he got a job dishwashing at a typical New England mom-and-pop restaurant in Dartmouth where he “had been watching and learning without knowing it,” to the point that when one fry cook called out sick, John immediately jumped behind the weeded grill to help. The chef asked what he thought he was doing, to which he replied, “We need two fish and chips and three fried clams, right?” He never dish-washed a day after that.

Radcliffe knew early in life what career path he wanted to follow, so he felt no remorse leaving high school early after a failed attempt to stop the construction of the new Dartmouth High School on wetlands that buffered run off into the Padanaram Harbor. He got his GED and worked at The Back Eddy in Westport under chef Chris Schlesinger who instilled in him some of his most sacred barbeque methods, such as “developing different spice rubs, pickling anything that came out of the ground, and smoking anything that once breathed.”

By the time he was 16, John was running an 18-burner sauté station and a five foot wood-burning grill alongside a bunch of hardened chefs, with whom he’d spend his summer nights starting fires on the beach and summer mornings surfing before heading back in to work by noon. He still surfs today year-round, donning a head-to-toe wetsuit to ride the winter waves that he says can keep him going for 45 minutes to an hour and a half before he goes completely numb.

John’s creativity truly flourished when he left home at 17 for San Francisco and attended the California Culinary Academy, which Le Cordon Bleu bought out while he was in school. He now has two Associate’s Degrees in the culinary arts from both schools. Halfway through his education, John got a job at a fine dining, 13-course menu, raw-food restaurant with a $5 million kitchen called Roxanne’s, where he claims he learned more than he did at school.

“It takes a lot to make raw food fine dining,” he said with a raspy, surfer-dude laugh.

While John says that there’s something to be said about working in a high-volume sauté station, filling up a restaurant with smoke and getting slammed on a Friday night, he prefers working in fine dining because he likes the detail involved in the process.

“I love the passion that everyone shares in the kitchen for putting out awesome food and even the interior competition. Everyone wants to impress everyone else, but in a friendly way.”

That being said, in the future, Chef John wishes to open up his own food-focused, 50 to 100 seat spot, ideally outside the city in a farming location, like Westport, that has a summer influx of tourism but still maintains a farming tradition and an emphasis on local ingredients.

“What really makes a difference on the plate is getting what’s local and fresh, especially seasonal vegetables,” he said.

For instance, in the spring, John will feature ramps and rhubarbs on his menu, and he is now featuring the Massachusetts native macomber turnip. He chooses his produce distributors for Central Wharf’s menu with care, buying from local companies like Cambridge Packing.

Radcliffe believes that it is the chef’s responsibility to set a trend of sustainability.

“We’re the ones feeding people who can afford to go out to eat, and it’s up to us to help the environment out,” he said. “I don’t know why anyone would ever serve Chilean sea bass. It’s going extinct.”

John hopes to be able to only plate ingredients that are grown or produced within 10 miles of his location, but that doesn’t mean it will be a typical New England beach dive, serving up chowdah and slinging fried clams.

“I’ve got a lot of fuel to burn in terms of stuff I’ve picked up from California,” he said.

John also has the experience to build his future kitchen exactly how he wants it. In fact, Central Wharf Co.’s kitchen is his third kitchen design project after The Noon Hill Grill in Medfield and the Lakeville Country Club.

“The most important thing when designing a kitchen is knowing what type of food you’re going to put out so you can design the kitchen to have an even flow to push that food out, whatever your handicaps are.”

Even though Central Wharf’s kitchen is tiny, John designed it to be shaped like an L with each line of the letter flowing to the middle where the window is, which avoids traffic on the line.

His fellow cook, Omar Martinez, said he likes the flow of this kitchen in comparison to others he has worked in, and he said that he has learned a lot from John and John’s ideas.

“We learn from him and he learns from us,” said cook Marcos Orellana. “John does his job. He is a very calm person.”

His own restaurant will have to be put on hold for the time being while John takes care of personal matters. The charismatic chef is happily engaged to a woman of Italian background named Maria. The two got engaged on June 13, 2014 and have the wedding date set for May 23 on the beach in Westport. The reception will be held where John fell in love with cooking, The Back Eddy. Maria has a 7 year old daughter, Jocelyn, whom John says he already sees as his daughter. He likes to make pizzas with Jocelyn and cooks for Maria’s parents, Italian immigrants who have taught him the best way to make stuffed shells and a great recipe for cannoli filling.

To any aspiring chefs, John advises that you, “be a sponge, work hard, get your hands dirty, and don’t say no. Bounce around to different spots and try new styles. Don’t be afraid to leave your comfort zone.”