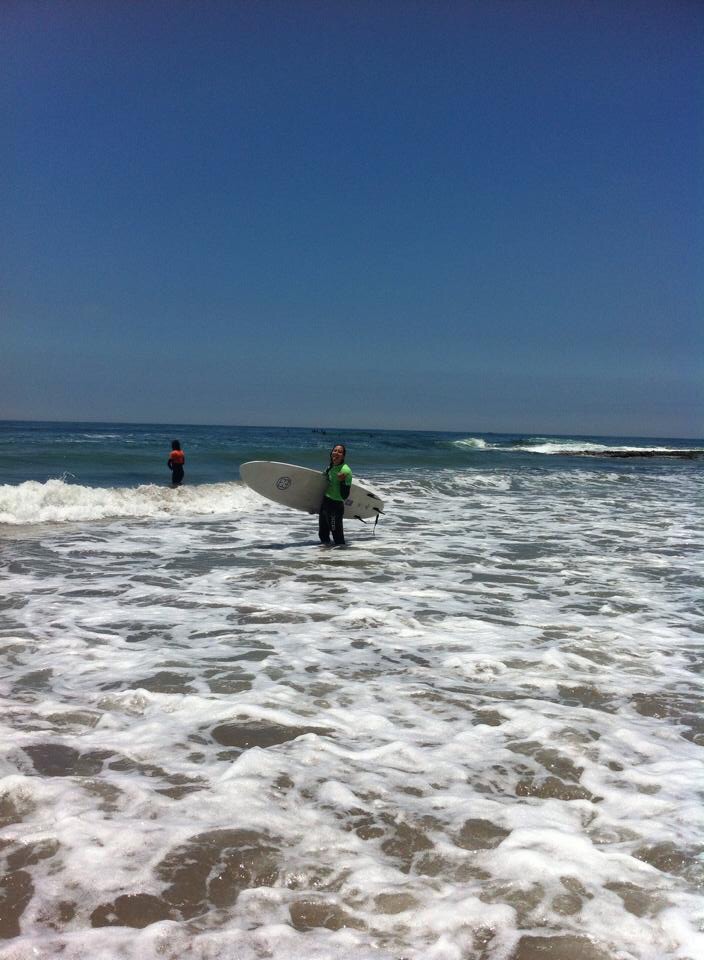 Iquique, Chile is a great place to learn how to surf.

After two cheap hours of surf lessons, I was standing up on my rented board on the salty waves of Iquique.

Not many people can say that they stared at a desert while being rocked by ocean waves. But as I balanced on my stomach on a surfboard facing the shore, waiting for the next wave, I kept my eyes on the tan sand dunes rising in front of me under a clear blue sky. Closer in my field of vision was my instructor, his long hair wet and stringy, his hands steadying the tip of my board, his eyes intensely scanning the water behind me, occasionally scurrying forward, pushing me back, a sign which I learned meant that too big a wave was coming, and to lift my ribs up so the crest wouldn’t smack me in the back of my head and knock me over. With my hands grasping the side of the board, I waited patiently for him to say, “Dale, rema, rema!” and give my board a push towards the shore. I’d paddle hard like he told me to, until I felt the wave start to break and pull me forward, then I’d swiftly put my hands back on the board, push up, and bring my feet to a crouching position, riding the surf a few triumphant feet.

There’s not much to do in the little beach town of Iquique but shop, drink, surf, or paraglide. While paragliding seems like fun, an expensive tandem glide through the air wasn’t my idea of a challenge. Shopping is always fun when you’re traveling, so that was a no-brainer.

That left drinking or surfing, so obviously, I picked surfing. I can drink in Boston. Now is the time to try every extreme sport possible.

At noon, I made my way to the EcoRiders tent on the beach a block away from my hostel, Backpacker’s Hostel Iquique.

A skinny, indifferent instructor told me to run the length of the beach and back to warm up. I ran past hordes of young men playing four square and volleyball, who were kind enough to stop what they were doing and catcall at me as my breasts moved around uncomfortably in my bikini.

When I returned red-faced to the tent, my instructor (I think he said his name was Liter, so we’ll go with that) had me do Russian twists and push-ups and other core/arm exercises to warm me up for the cold, salty Pacific waters. It felt good to engage in strength training after a few months without. After some stretches, he handed me a wet suit and left me to figure it out while he put on his own. It probably took me about ten minutes to pull the thing on. I grunted and yanked and panted and fell in the sand, realizing that all my training with stockings and leggings would be no use with this thick, still-wet, ankle-to-chin fabric. When I finally got suited, Liter had me top off my skin-tight onesie with a bright green, newbie-alert t-shirt. He wore a bright orange instructor shirt that he tied behind his back like a girl would when wearing her boyfriend’s t-shirt. I held the surf board while we walked to the shore, Liter occasionally calling out to fellow brown, long-haired surf friends, giving them the universal ‘surf’s up, dude’ hand gesture. A few practice runs pawing at the sand and standing up quickly, and we were heading into the water. Seaweed clung to my ankles as I tried to dodge rocks and crabs and jellyfish.

“Arriba,” he said once we were hip-deep in the water. Ok, we’re doing this. Up on the board, and the balancing act began. I tried not to look like the fool I was, teetering from side to side as I managed to inch my head to where it was supposed to be. Liter told me that my nose should touch the logo on the board. If I’m too far forward or back, I could tip the board. Not thirty seconds into it and he’s telling me to paddle hard. I did as I was told, and listened for him to tell me to stand up. I tried, got my feet planted, and fell off. Not bad. This went on a few times, me kind of standing and then plopping into the shallow water, landing easily on my feet.

“The waves aren’t big enough,” I complained in Spanish. “They don’t have the power to bring me anywhere. They slow me down.”

“You can feel that?” he asked me seriously.

I said that I could, and told him I wasn’t scared of a big wave. He smiled and I could tell that I was starting to melt his indifference and probable boredom with the mundane task of teaching a gringa how to nail a baby wave. He pointed me in the direction of a few big ones, which I almost landed, when I didn’t get inside my own head. I was getting better the more I focused on how I could complete the task at hand rather than how I could fail. So, as I looked out at the desert and watched Laura appear and pull her iPhone out of her bag, I reminded myself what I would have to do when I began to feel the wave crash under my board. Stand up quick, stay low, lean on your back leg and straighten your front leg. Like snowboarding and sandboarding and kiteboarding. Easy.

“Puedes sentirlo? Can you feel it?” I asked him.

“This is the one,” I told him, making us both laugh.

Not ten seconds later, he got that look on his face like, it’s time, and he didn’t even have to tell me what to do. I paddled as hard as my tired arms and shoulders would allow me, and I did it. It was cake. See for yourself.