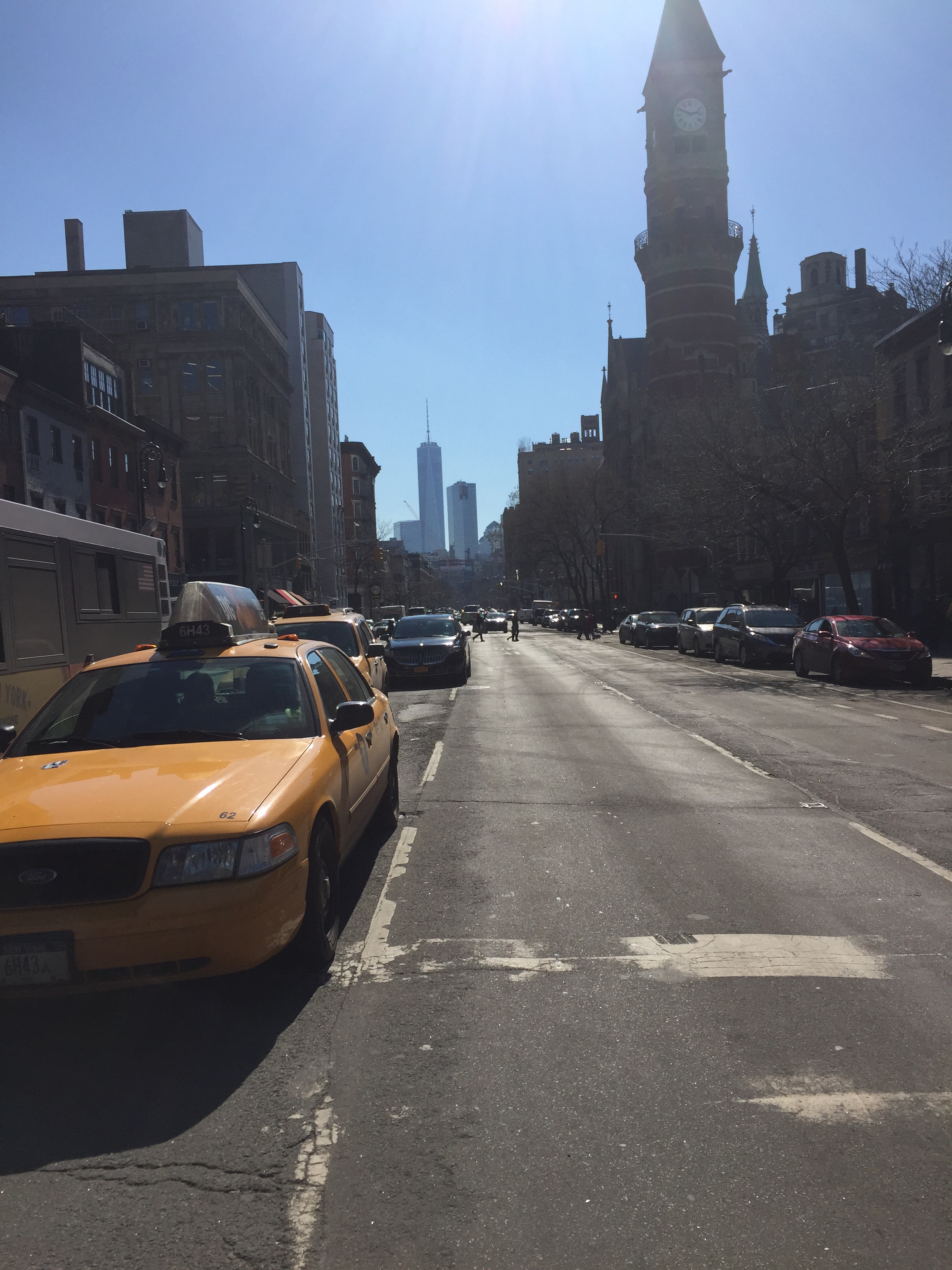 A day of unconventional sightseeing in New York City

Showing my friends around lower Manhattan and feeding them the best bagels, pizza and halal that the city has to offer.

My Australian friend, Greer, whom I met in Colombia, has been traveling around the States with her boyfriend Jeremy, aka “Jez,” and made a stop in my hometown. I had a day off work in Boston, so I decided to drive down to give them a glorious day in New York City that they couldn’t get from reading guidebooks. Most of it included food, but isn’t that the best part of traveling?

A trip to New York is not complete without trying a “real” bagel. The bagel, created in Krakow, Poland around the 15th century, came to the United States with immigrant Polish-Jews who created a thriving business of the delicious doughy circles in New York City. While it’s nearly impossible to get a bad bagel in New York, one of my favorite midtown haunts is Ess-a-Bagel, on the corner of 52nd street and 3rd avenue.

Jez held down a table while Greer and I waited on the long, but fast moving, line. She exclaimed gleeful surprise at the amount of cheese selections at the deli and pointed to knishes asking if they were bagels, and then, asked what knishes are. I ordered three different bagel sandwiches for them to try- cinnamon raisin with Oreo cream cheese, an everything bagel with chicken salad, and a whole wheat everything with bacon, egg and cheese and salt, pepper, ketchup. Needless to say, they were impressed, and as we munched happily, I listened like a worried parent as they explained their desire to try crack while in the Big Apple, and I laughed at their astonishment at the idea of cheese in a can. I almost choked on my latté when Greer asked me quite seriously if I had ever had Snapple.

Unoriginal, I’m aware. Since the historic freight train site was converted into a park in 2009, the High Line has been added to the list of Manhattan must sees. I hadn’t seen it yet either, so I figured we’d mozy on over to the West Side to see what so many of my New York friends had been instagraming.

According to a sign at the site, the High Line, “was built by the New York Central Railroad between 1929 and 1934 to lift dangerous freight trains from Manhattan’s streets.”

It is now a public park that runs above the streets on the West Side overlooking the Hudson River.

The park is quite bare in the winter, so not the best for taking photos, but I have some photos from friends that show it is lovely and lush in the warmer seasons.

Despite the slight chill to the air, many New Yorkers were lounging on wooden benches and enjoying the sunlight. The Australians scavenged the melting snow banks to throw snow balls at each other like a couple of 10 year olds.

The Spotted Pig and the West Village

The West Village of Manhattan is a truly dynamic part of the city, made up mainly of 18th century brick buildings with great, clean stoops.

Historically an artsy and bohemian neighborhood, but now home to more upper-middle class residents, the western-most portion of Greenwich Village is “bougie” to the core, and no other restaurant is as perfect an example of this characteristic than The Spotted Pig. The famous restaurant is one of New York’s first gastropubs and boasts a focus on simple food made well with straightforward ingredients, a serious wine list, and offerings of cask beers.

The restaurant itself is two floors and made of warm wooden furnishings, with an impressive variety of pig tchotchkes and paintings about. The rickety, antique-like furniture and small amount of space make coming in with little more than a handbag somewhat stressful, and the menu definitely doesn’t think about your wallet’s feelings when it decides what to charge. Nonetheless, we ordered up some “apps,” a term the Aussies thought was adorably American, of deviled eggs, shoestring rosemary fries, and paté on crusty bread. 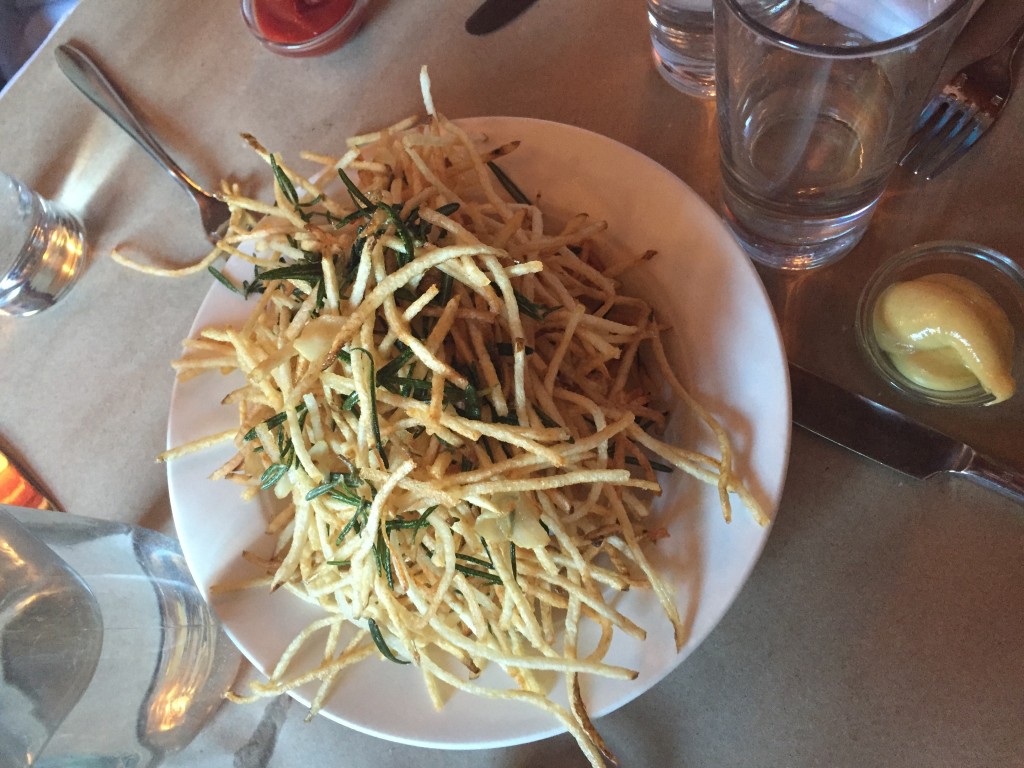 As a kid, I always loved to take the train to Union Square, often for Improv Everywhere events, “a New York based prank collective that causes scenes of joy and chaos in public places,” like the giant pillow fight of 2008 or a silent rave.

However, I love Union Square on any day for its clean pathways, the groups of people hanging out on the stairs, the farmer’s market, and the statue of a guy on a horse.

Greer, Jez and I walked from the West Village to Union Square, where we then branched off so I could show them a couple of stores I like to waste time in, New York Costumes and The Strand Bookstore.

New York Costumes is a hilarious year-round costume shop with two large floors of endless entertainment. From spooky statues to skanky costumes to realistic props, I could easily spend an hour playing with all of the toys and taking selfies with scary masks.

The Strand is a book-lover’s dream. 18 miles worth of books, lined up in tight aisles that smell like the best kind of mold, the kind that grows on pages and makes you want to stick your nose between the binding and breath in deep.They sell new, used and out-of-print books. I love taking my little sister here and watching her climb the rolling staircases to discover new books hidden on higher shelves or sit on the floor in a quiet corner making “yes,” “no,” and “maybe” piles. I knew Greer was an avid reader, so I thought she’d appreciate the sheer quantity of books offered at this amazing store.

I’d have loved to take them to my third personal must-visit spot in Union Square, the restaurant Max Brenner, for some seriously sick chocolate creations, but I was trying to save room in our stomachs for more important New York food staples.

I wanted Greer and Jez to get a sense of the sense of freedom in the neighborhoods, so first I walked them down St. Marks Place and Avenue A to enjoy the regurgitation of youth culture in the neighborhood that once housed starving artists and the birth of punk rock. From St. Marks, we made our way back west towards Cooper Square and strolled slowly down St Marks between Cooper and 2nd Ave, eyeing the displays of beautiful blown glass, considering getting tattoos, and debating whether to stop for pizza or hot dogs. In the end, 2 Bros Pizza and their $1 per slice deal won out over Papaya King Hotdogs, though I highly suggest trying both New York delicacies if you have the time and the stomach.

We stuffed our faces and chugged a quick street beer and then headed over to Washington Square Park near NYU to sightsee a bit. It was a warm day for winter, and the sun was beginning to set as the usual frolicking of different strokes continued in the park. Small children clapped excitingly over big bubbles, old men played chess and checkers, a man in skirt played ragtime on a piano under the Triumphal Arch dedicated to George Washington’s 100th anniversary of inauguration as the President of the United States, and we stood watching all of it as we munched on Maple and Bacon kettle cooked chips, an odd flavor of potato chips that Greer and Jez couldn’t walk past without trying. 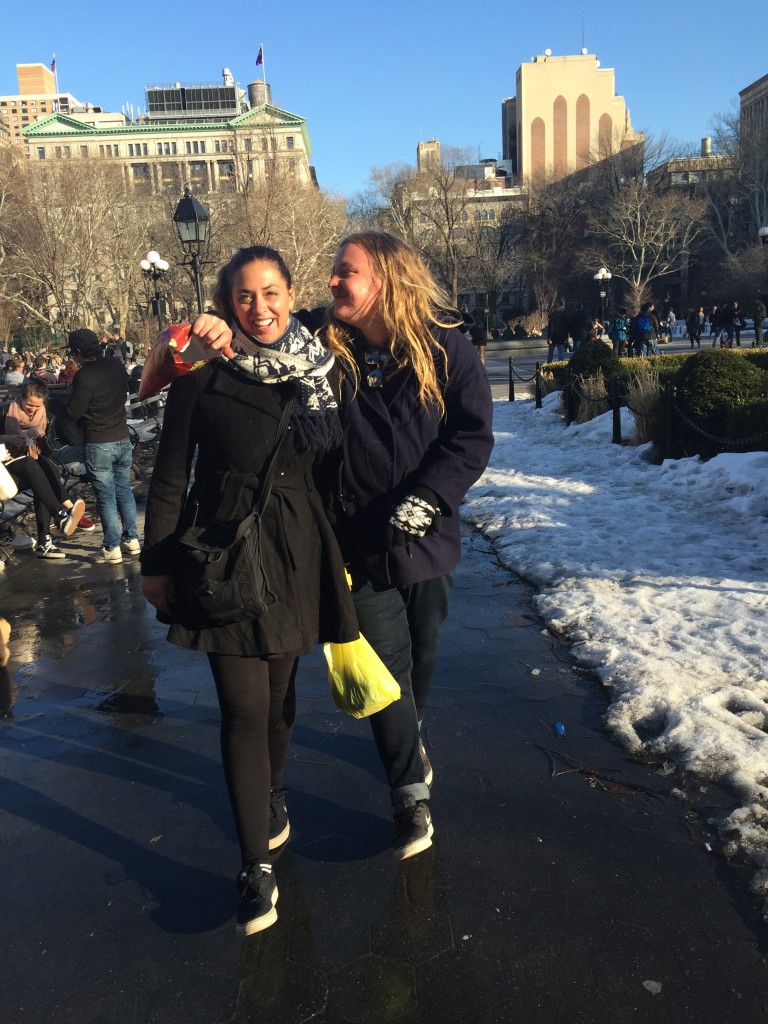 If we had had the time or the stomach space, I would have delighted in taking Greer and Jez to sample one of New York’s famous Jewish delis, specifically Katz’s Delicatessen on Houston Street near the recently departed Empanada Mama (RIP- I will never forget the Viagra Empanada you fed me one time at 4 in the morning.) Katz’s has been a cash-only deli since 1888 with the fattest sandwiches it will ever be your pleasure to unhinge your jaw for. You can order any corned beef or pastrami sandwich, and your taste buds and soul will thank you kindly. But don’t limit yourself. Have some chicken soup or a potato knish with deli mustard to round out your meal.

I’d also have taken my friends to one of the cool bars down there, like One-and-One on the corner of 1st Street and 1st Avenue to dance to some Top 40, or to Hair of the Dog on Orchard and Stanton for the young crowd and beer pong tables, or even to Pianos on Ludlow for lounge vibes and 90s hip hop. But alas, Jez didn’t know about the whole ID-ing thing, and we had to trek all the way back up to their hostel in Harlem to get his passport.

On our way back up town, we made sure to stop at the iconic Halal Guys food stand on 53rd Street and 6th Avenue for a mixed chicken and lamb platter with rice, salad, and white sauce (hold the hot sauce). That warm, aromatic platter didn’t stand a chance.

The day I met up with the Australians in New York was also the day that Biggie Smalls, Notorious BIG, died in 1997.

In honor of this great man, I taught Greer and Jez what a blunt was, how to roll one by two-stepping, and introduced them to 40 oz. bottles of beer and malt liquor. After we were rolled up and ready, with a 40 of Old English, we poured some out for our fallen homie and made our way back downtown.

I would like to say that even though we properly brown-bagged our bottles, open container laws in New York still apply, and you really shouldn’t be out and about with an open bottle of any alcoholic beverage, lest you get a fine from the pigs of $25 or up to 5 days imprisonment. I got a little spooked while we were drinking a tall boy of Rolling Rock on the street and a cop car seemed to stop and notice.

Unfortunately, my first reaction was to chuck the can and tell Greer and Jez to scatter while I ducked into a convenience store. I didn’t need the Stop-and-Frisk police to decide they have reasonable suspicion that I am committing or about to commit a crime, such as the one I neatly rolled into a cigar wrap. Word to the wise, if a New York police officer asks to search you, your things or your vehicle, you do not have to give consent and you do not have to say anything. If he or she asks you to turn out your pockets, you can refuse (and should if you have drugs in them) because they can really only bag you if you show them your stash. Ask if you are being arrested or if you are free to leave. For more tips on how to survive an encounter with the New York Pig Department, check out what the New York Civil Liberties Union has to say.

I don’t know about anyone else, but before I moved to Boston, one of my favorite pastimes would be to go into the city with friends for some hookah and snacks in the village. I took my friends to Pergola Restaurant, a somewhat classier place than the super downtown, smoke-filled hookah dives with cushion-laden corners that I was accustomed to. We snacked on an octopus salad and a plate of warm pita and cold dips of babaganoush, hummus and tapenade as we blew out mandarin and mint tobacco from a large glass water pipe. It was the perfect way to settle our super full stomachs and wind down after a very full day.

I had an awesome time being a tour guide for my foreign friends, and hope that this recounting of our day together can serve as a guide for other tourists who want to spend a splendid, slightly off the beaten tracks, day in Manhattan!