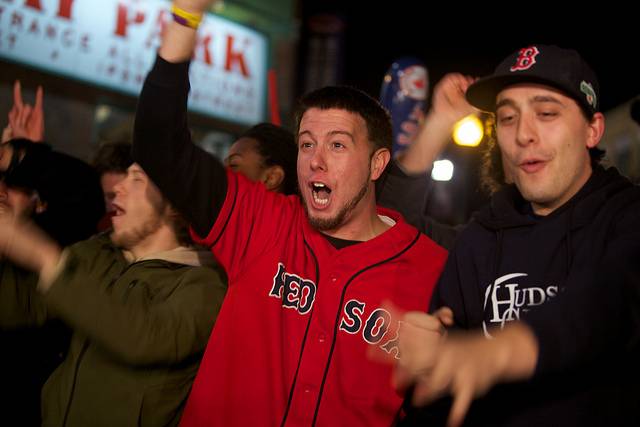 “A liquor store is a “packie,” “jimmies” are sprinkles, a “spa” is a deli, “frappes” are milkshakes and it’s a “rotary” not a roundabout. Got it?”

Source: 19 things Bostonians always have to explain to out-of-towners

1. Yeah, that’s just a Colonial guy in breeches and spatterdashes. Ignore him.

They re-enact the Boston Tea Party, or something. It’s a tourist thing to do. Like Duck Tours and whale watching.

2. Our gods are The Sox, The Pats, the Bruins and the Celtics.

You must never blaspheme the gods in front of a Boston native. Praise the demi-gods Tom Brady, Robert Paxton Gronkowski aka “Gronk” and David Ortiz aka “Big Papi.”

3. A liquor store is a ‘packie,’ ‘jimmies’ are sprinkles, a ‘spa’ is a deli, ‘frappes’ are milkshakes and it’s a ‘rotary’ not a roundabout. Got it?

After I run this packie, I’ll take the second exit off the rotary to get a frappe with jimmies at Town Spa.

You’ve probably heard the famous phrase before. All tourists have fun with it. Let’s say it together, shall we? Pahk the cah in Hahvahd Yahd. Not so hard, right? Don’t say it to a local.

5. Good luck parking your car in Harvard Yard, or anywhere for that matter.

Meter maids are on the prowl, all the time. You parked at 5:59 when the meter expires at 6? $25 to the City of Boston. If you drove in, leave your car at the hotel and take the T. Definitely don’t try to drive in if you’re attempting to go to a Red Sox game. You will not succeed in finding parking, unless you have a large disposable income.

6. Yes, the Fens and Revere Beach have nice scenic views, but you better beware of needles.

Massachusetts has a serious opiate addiction problem. It’s very sad. Also beware the junkies; you’ll know them when you see them, and you will see them.

7. If we dig out a space on the street for our car, you can’t legally park there.

Of course, we may have to mark our territory with some chairs or trash cans or a 36-pack of Natty Lite.

8. ‘Dunks’ is slang for Dunkin Donuts, and it is the elixir of life.

Munchkins from Dunks are a perfect treat to bring to work, a party, a museum event, a tailgate, your cousin’s wake, etc. Boston runs on Dunkin.

9. The T is our subway, metro, whatever.

It generally stand for ‘transit’ or ‘transportation’ and is part of the larger MBTA, Massachusetts Bay Transportation Authority. It’s not very fast, especially on the Green Line that runs through universities like Boston University, Northeastern, Boston College, etc. But remember, patience is a virtue.

And our anthem. It’s played at every game, at the bottom of the eighth inning. It’s also not uncommon for a drunk guy, or kid (pronounced “khed,” though not actually a drunk child), to start up a chant on the T and get the whole car, including the driver, happily singing along.

And it’s chanted at every sporting event. We’re confident that Jesus hates the Yankees, too.

12. Timberland boots are acceptable footwear no matter the season.

13. Every winter, we inform everyone that we’re moving south.

But we don’t. And every summer, we stick around to enjoy Martha’s Vineyard and “The Cape” aka Cape Cod.

14. We use ‘wicked’ as an adverb, both ironically and seriously.

Went to Kelly’s Roast Beef last night and got some chicken fingahs. It was wicked pissah.

15. In addition to Kelly’s Roast Beef for late-night bites, Santarpio’s Pizza in East Boston (Eastie) and Union Oyster House in Government Center are our Boston go-tos.

Don’t forget the D’Angelo’s chain for a variety of hot and cold subs. Yes, subs. Not heroes, not grinders, not even sandwiches.

16. Only we can pronounce our towns correctly.

17. Anyone from Mass is going to tell you that these towns are all ‘half an hour away and two towns over.’

We aren’t always lying. Unless the town is in Western Mass. Might as well be its own state, the Yankee lovers.

Mass-holes drive fast, recklessly and cut other drivers off with wanton abandon, so much so that MassDOT, the Department of Transportation, has put signs on the highway that say “USE YAH BLINKAH.”

19. And our pedestrians are not much nicer.

So don’t say hi to strangers on the street. It’s creepy and may get you beat up. Mass-holes love a good fight.