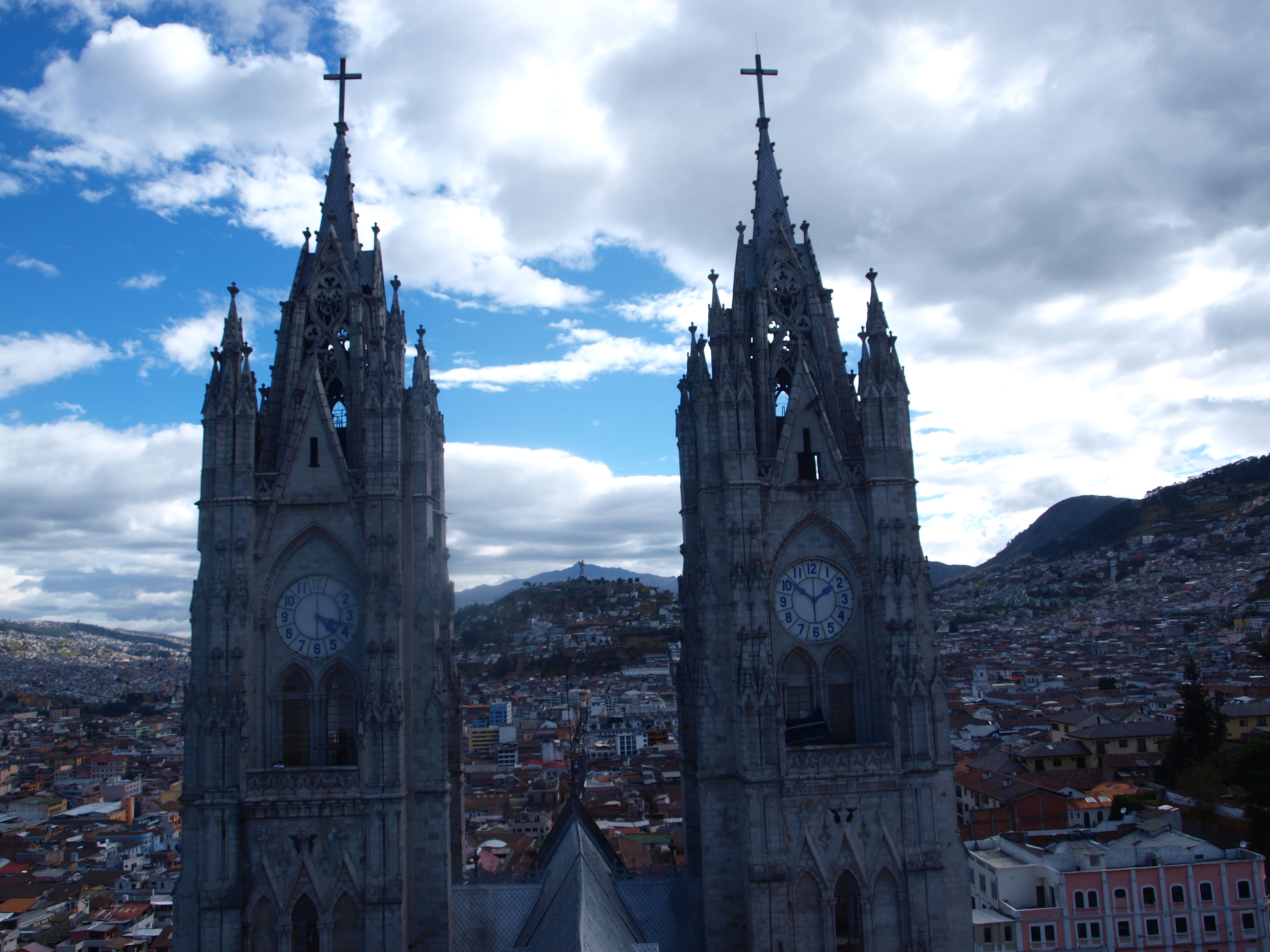 There comes a time in your travels when you know there are things that you should be seeing, but you are just sick of looking at touristy shit and all you want to do is chill and try to act like a local. I call it being “culturally pooped.” However, I must say that el Panecillo, la Basilica, and la Mitad del Mundo were worth their respective treks.

Much of the center and south of Quito offers a view of what roughly translates into “Bread Loaf Hill,” 200 meters high and, like much of Ecuador, of volcanic origin. I first spotted it walking on a main road called Avenida de la Pichincha, a small stone angel perched atop a round hill. I wondered how long it would take to walk up it in Quito’s high altitude. Legend has it that there used to be an Incan temple at the top worshipping the sun until the Spanish conquistadores tore it down and put up an angel, inspired by the Virgen de Quito statue in the Church and Convent of San Fransisco. Classic conquistadores!

Anyways, a few new friends from the walking tour and I decided to see the Madonna in all her glory. We were instructed NOT to try to walk up the hill. Apparently, the South side of town can get pretty rough. The hill is in the location of the old black market, and now theives follow in the footsteps of their forebearers and rob foreigners stupid enough to attempt the incline by foot.

So I, along with two Australians, two Americans and a Chinese girl, set off in two cabs to the top, paying $2 for the trip. The others had the good sense to ask their cabbie to wait for them while they went sightseeing so they’d have a ride down, something I highly recommend because my group had a hard time finding a ride down. We probably overlooked this bit of common sense because we were in awe of the, to my surprise and delight, giant 135 foot aluminum statue that towered over us. The plaque at the base read that the dancing angel with flowing wings represents the ‘Woman of the Apocalypse from the Book of Revelations’, described in the Bible as “a woman clothed with the sun, with the moon under her feet and on her head a crown of twelve stars.” (Revelations, 12:1) She was just that, a testament to the talent and artistry of her Spanish maker, Agustin de la Herran Matorras, who somehow turned seven thousand pieces of aluminum into a fluid dancer. 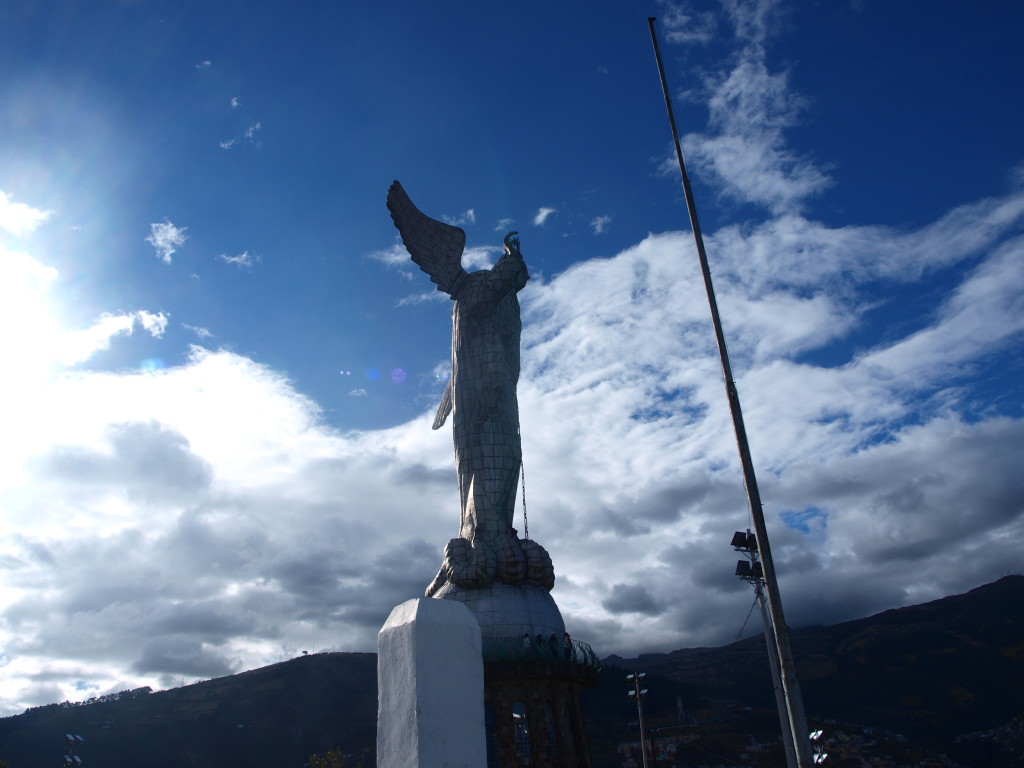 While the statue itself was breathtaking, the real show stopper was the panoramic view of Quito and her surrounding mountains. Building spread out before me like so many tiny Lego blocks underneath those gorgeous tumbling mountains. You’ve got to see it for yourself. 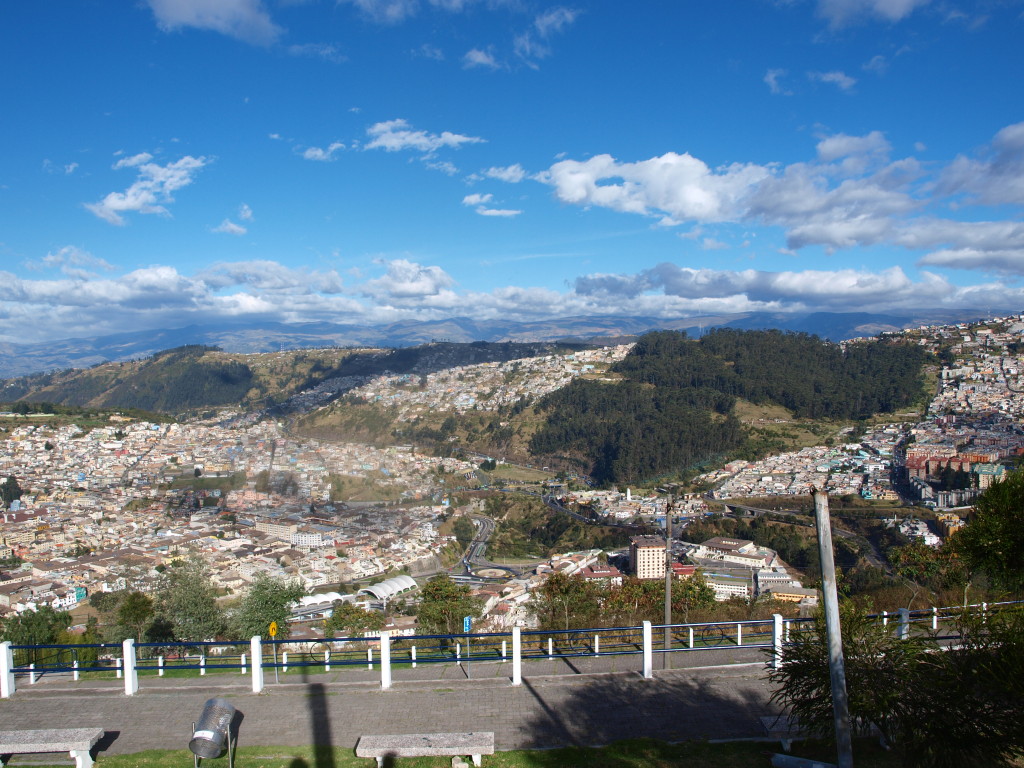 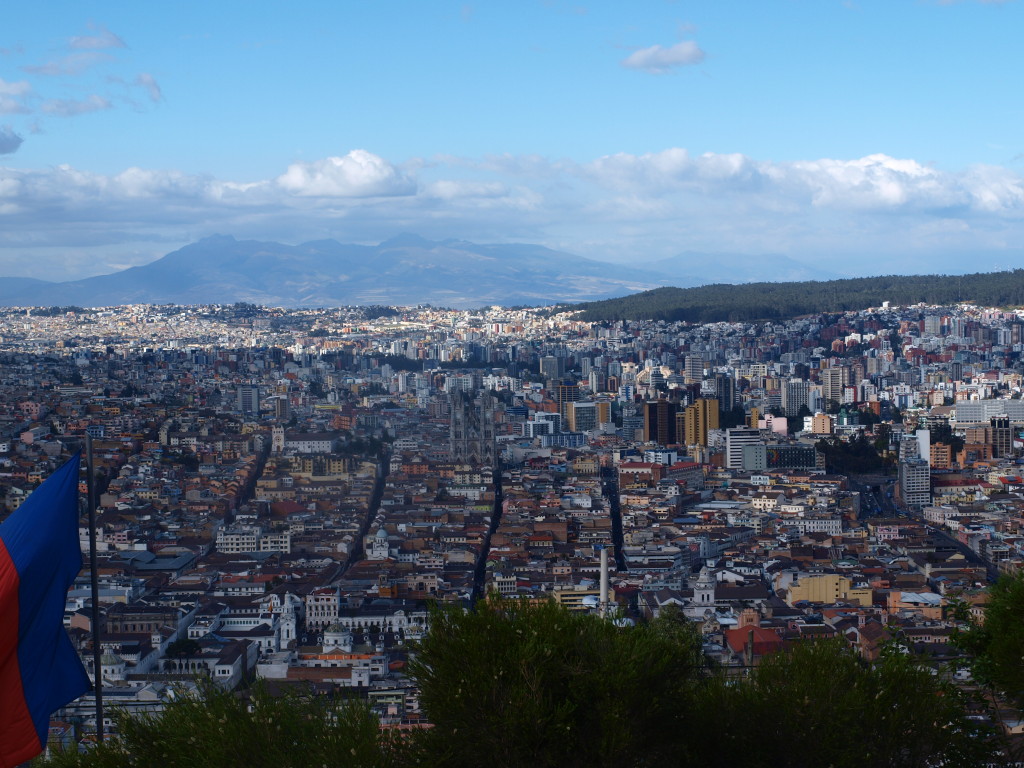 Perhaps some of you are thinking, like I was when the group declared their interest in actually going inside the cathedral, that once you’ve seen one giant neo-Gothic church, you’ve seen them all. I feel the same about amphitheaters. However, an Australian from the group merely had to point to one of the high towers and say that we could climb it for me to agree willingly to pay the entrance fee of $1 and another $2 to get to the towers.

The inside of the church was unsurprisingly breathtaking. I did what the builders intended for me to; I looked up. The symmetry of the high arches, vaulted ceilings and stained glass windows were most definitely designed to put the awe of a perfect symmetrical God into the hearts and minds of churchgoers.

But church is boring, and I felt sort of sacrilege taking my birth control pills while sitting on a pew, so we finally made the steep climb to the towers.

We had to go outside and around on the way to the tower entrance. Looking at the outer decorations of the basilica, I realized that the gargoyles weren’t actually gargoyles, but rather “grotesques” that looked like tropical animals. One of my more informed travel mates told me that they represented Galapagos animals in a testament to Ecuador.

We climbed both towers, each providing a different challenge and a different fantastic view of the city. The first tower we climbed was a little terrifying, one ladder after another.

The higher up we got the less we found support nets underneath the steps. Go figure. The second one wasn’t as bad, but only made me dizzy due to the constant upswirl of the spiral staircase. But it was all worth it, as it so often is, when you get to look at that horizon. I’m a sucker for a good view. 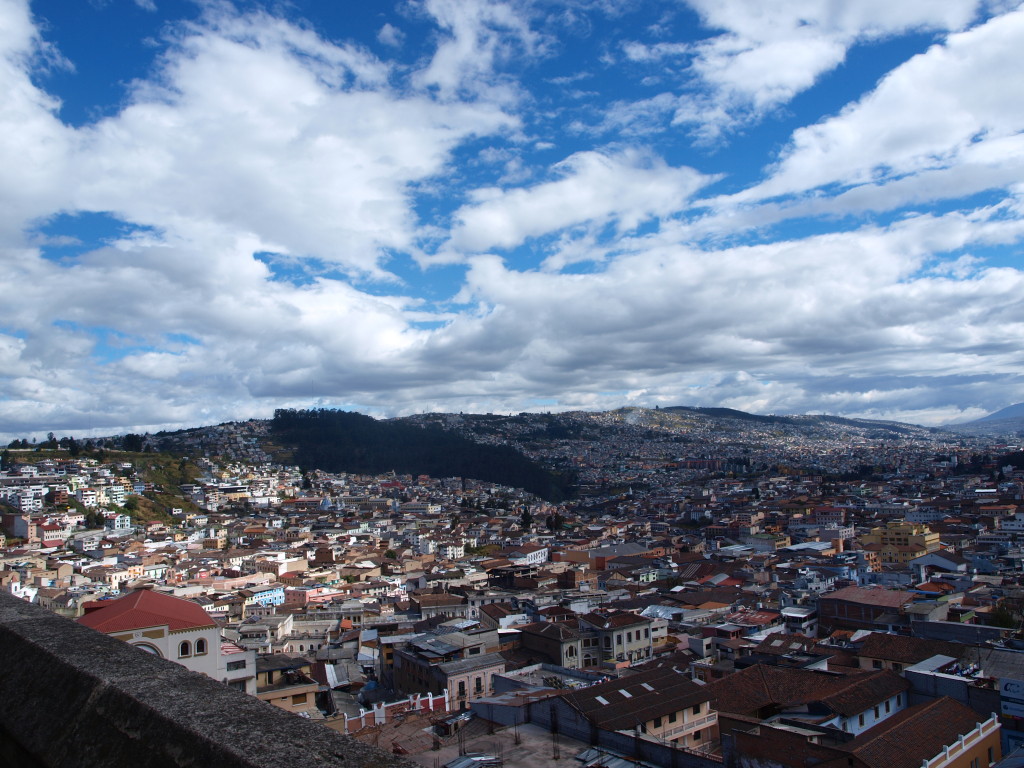 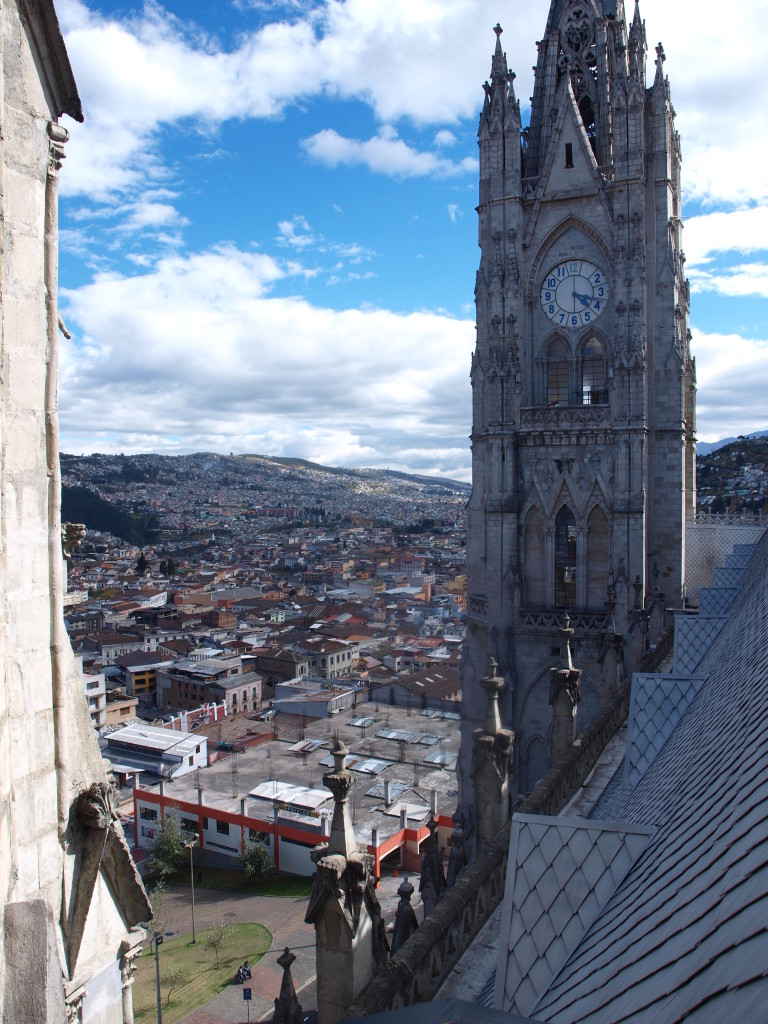 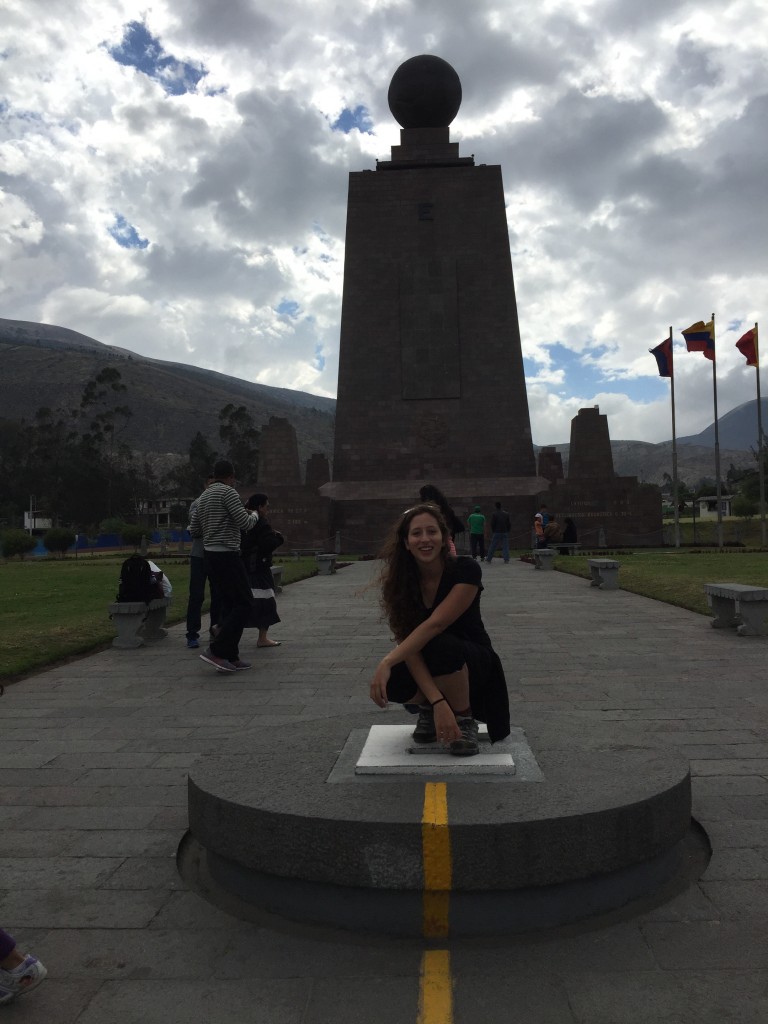 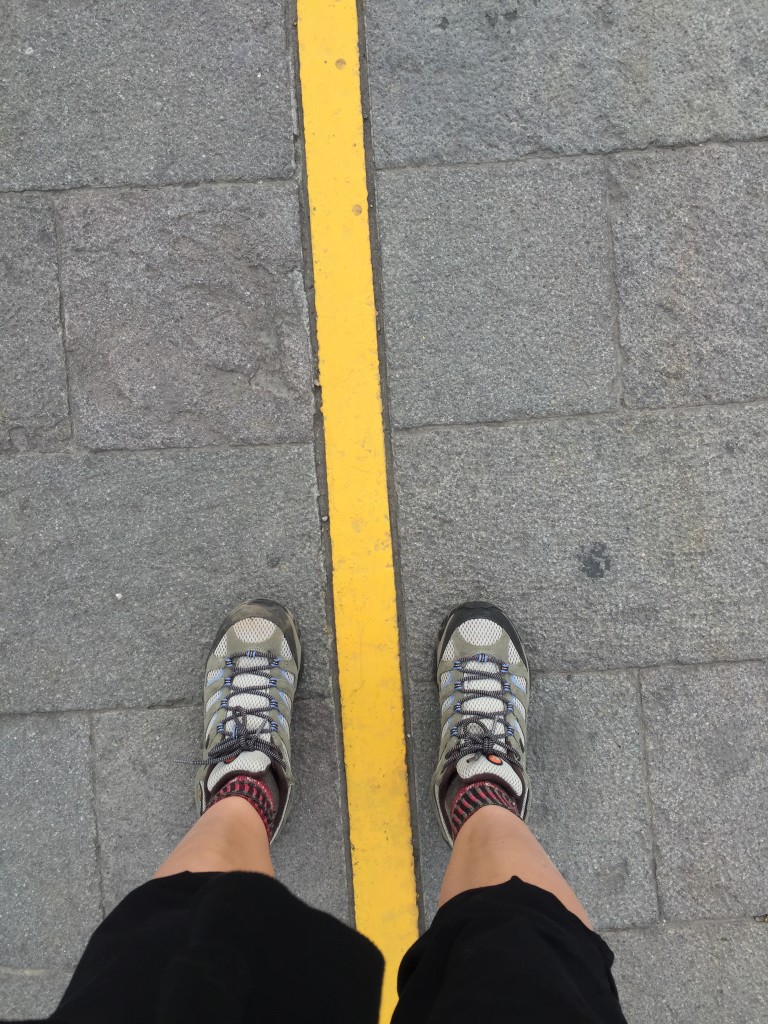 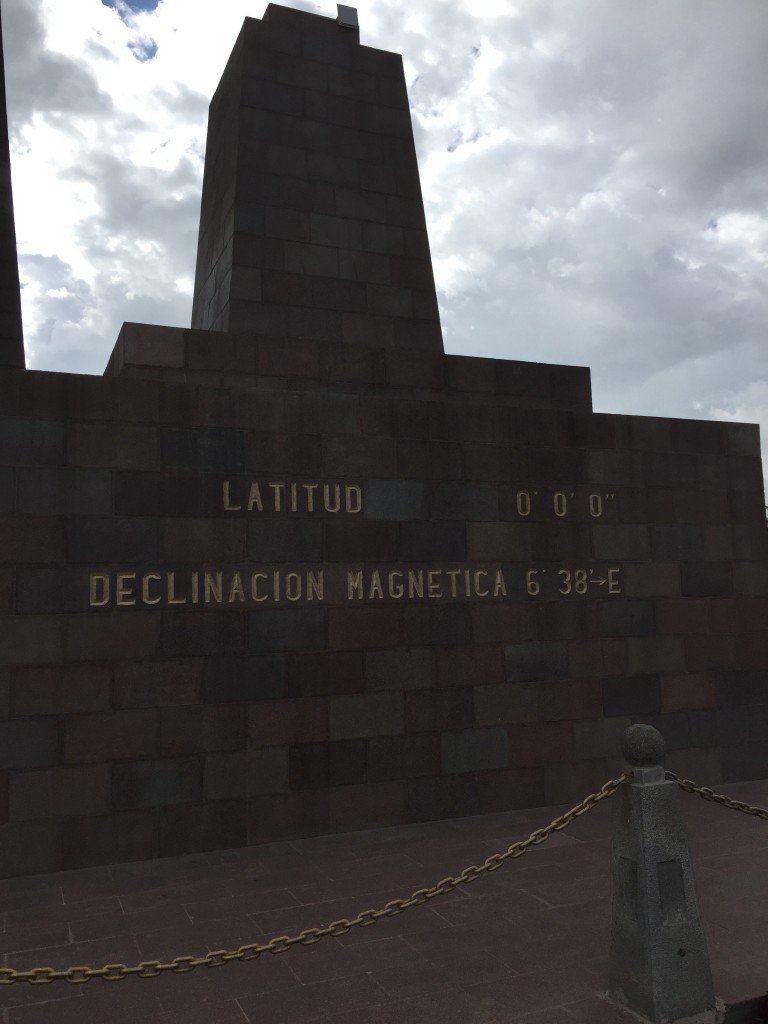 The middle of the world, or as I like to call it “Middle Earth,” is not actually in Quito, but it’s not hard to get a bus for the hour to hour and a half ride into San Antonio. I went with a fraction of my last sightseeing group, and we discussed our travels and made jokes along the way, making the trip seem shorter.

An hour on a bus changes the scenery drastically. Suddenly instead of feeling swallowed by buildings, I felt like I could breathe fully among the green mountains that were rising beside me like gods against a gray sky. We paid the entrance fee to the equator monument and took some pictures, which was cool, but not what we came for. We wanted to do those experiments that everyone was talking about. Apparently, the equator has some sort of mysterious power that makes eggs balance on nails and your weight change. When we asked about it, we were told to leave the park and walk down a rocky highway to the real GPS location of the equator. So the memorial is a fake. After about five minutes of walking, we found a tacky little tourist town with a modest sign reading “Museo Solar Inti-Nan.” The site is filled bamboo huts and suns carved of wood and totem poles, oozing “kitsch” according to my new Ozzie friend. The place was laughable with its gaudy attempts at seeming authentic, but apparently, this was the place to do the experiments. We paid $4 for a tour, which none of us wanted but went through with anyway. Hey, the place had wifi, and for five glorious minutes, we were all plugged in. 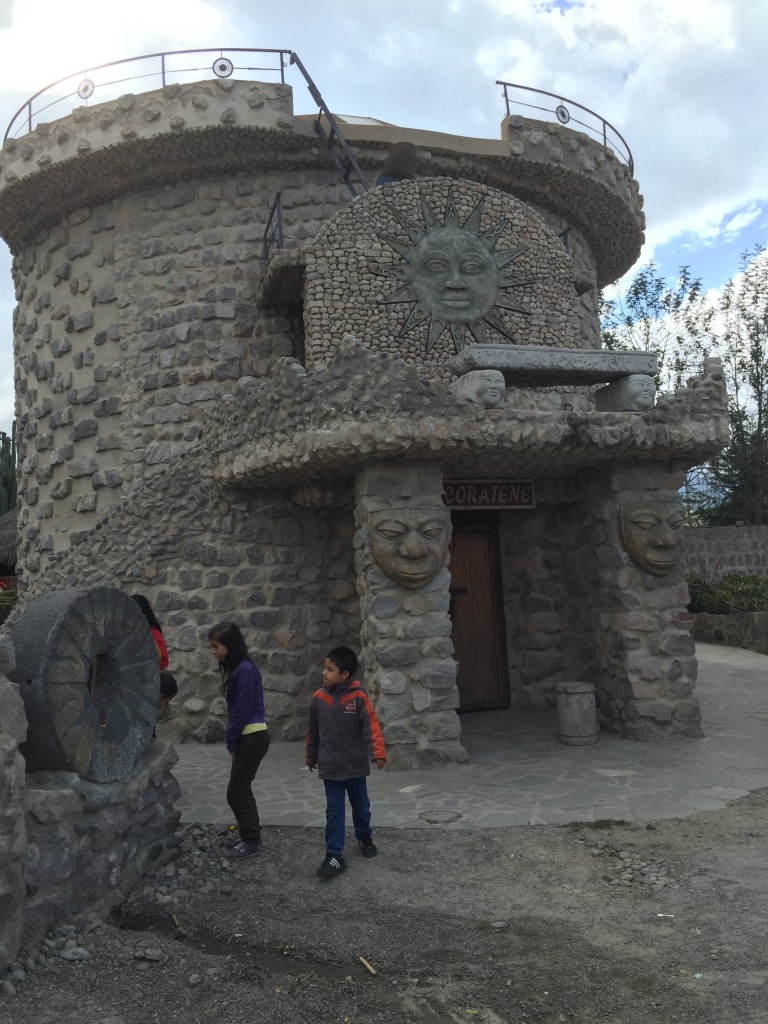 A nice tour guide with basic levels of English took us on an informative tour of the site. I actually enjoyed learning about the Shuar tribe that was around before the Incas and is apparently still kicking and worshipping the sun today. We went in and out of authentic huts that four Shuar families would share, learned about which spears are used for hunting and which for fighting, learned how to shrink heads (more on that in my next post), saw some giant spiders and an even more giant snake, and finally made it to the actual equator line, running red on the pavement. 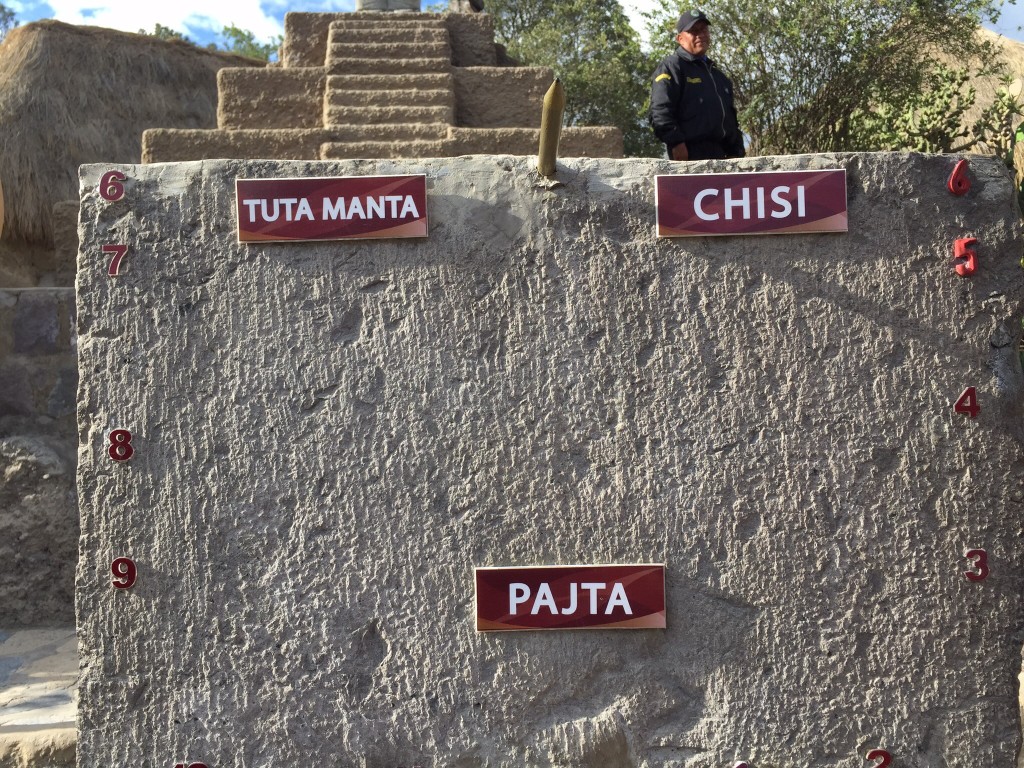 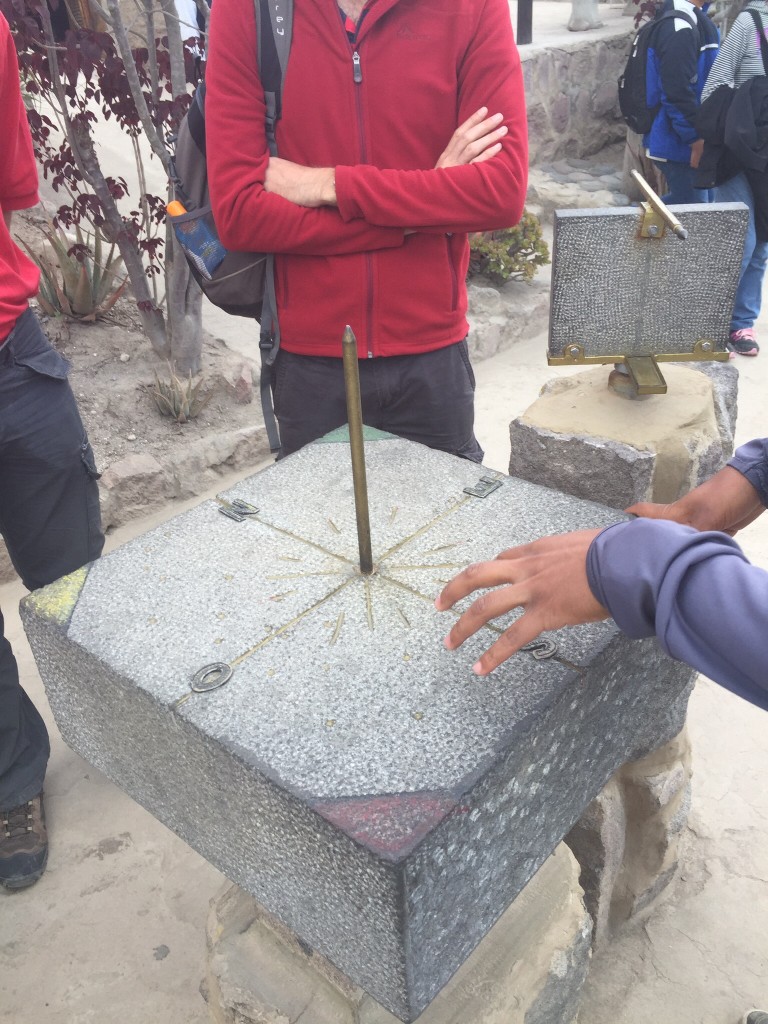 Along the line were a few examples of the equator’s power. First we looked at some sun dials, which was cool despite how ancient they were. I marveled how ingenious ancient humans were and at how far we’ve come. For the first experiment, the tour guide asked half of our group to stand on the northern side of a globe (and actually on the northern hemisphere) that has been tilted to line up with the actual equator. He spun the globe, demonstrating that it spins clockwise in the Northern Hemisphere and counter clockwise in the Southern Hemisphere, due to the Coriolis effect. Maybe you’ve heard of it? Wiki says that “The Coriolis effect is caused by the rotation of the Earth and the inertia of the mass experiencing the effect.” So the rotation of the Earth causes moving objects, like water and wind, to be deflected in a clockwise sense in the Northern Hemisphere, giving us hurricanes, and counter-clockwise in the Southern Hemisphere, causing typhoons and monsoons. I think. The tour guide demonstrated the effect of the equator on water by first positioning a bucket of water and a few floating leaves over the equator line. He pulled the plug from the bottom of the basin and we watched like kids in a science class as the water drained straight out. He then moved it to the Northern Hemisphere, did the experiment again, and we watched as the water swirled clockwise. I’m sure you could guess what happened when we moved the experiment to the Southern Hemisphere.

Next he demonstrated how if you have one foot on each side of the line, you can balance an egg on a nail that sits on the equator. I couldn’t do it, but everyone else in my group easily became an “Egg Master.” 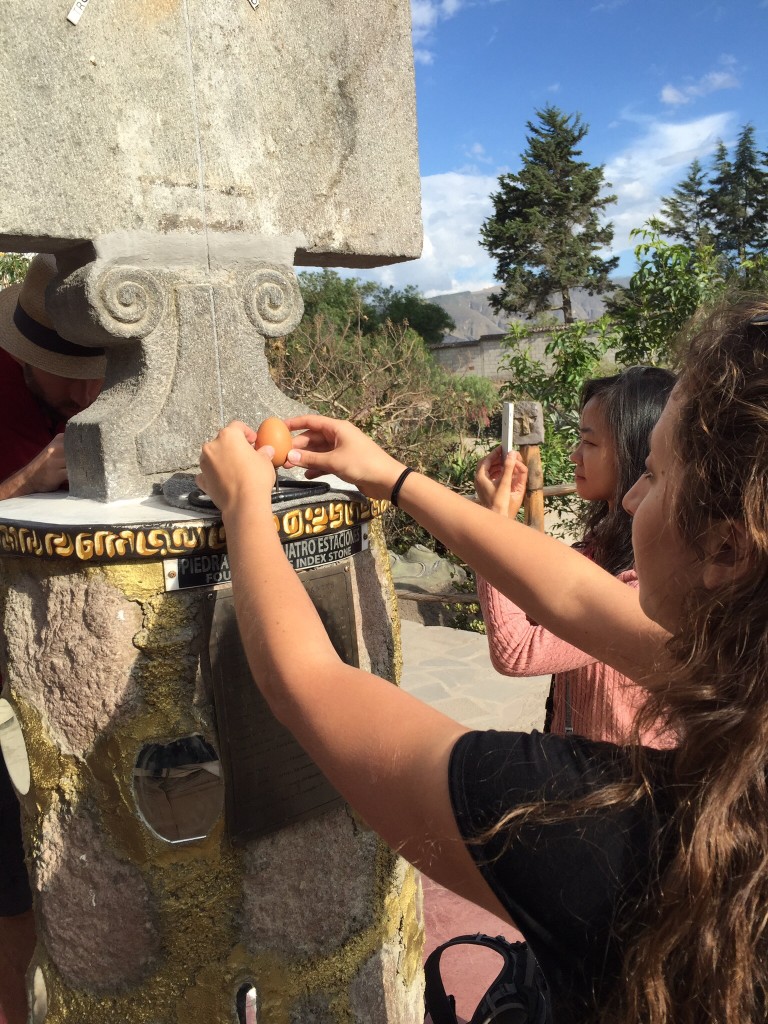 After the egg he asked us to try to walk toe to toe in a straight line with our eyes closed on the equator line. None of us could hold our balance, probably because of that darn coriolis effect. When I finally lost my balance, I landed on the Northern Hemisphere side. “You belong to the North,” said my new friend Rachel from China. Funnily enough, she and the other American fell to the North while the Australian fell to the South. Coincidence? Probably. 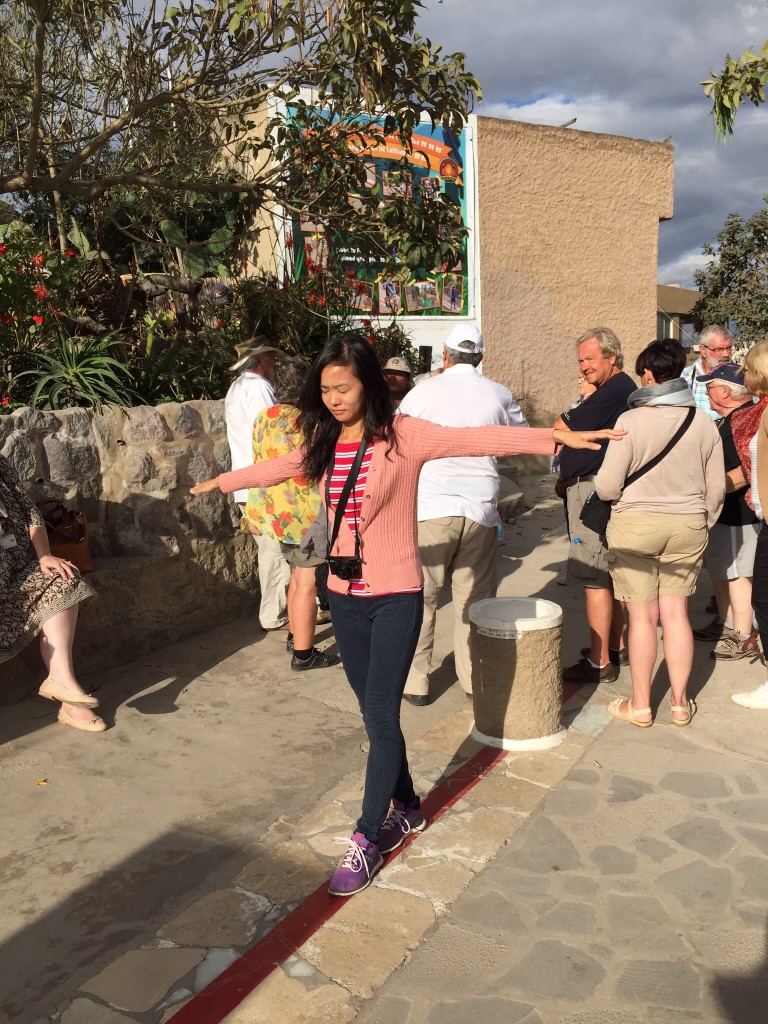 For the final experiment, the guide asked for a volunteer, and I promptly raised my hand. He asked me to stand on one side of the line, I don’t remember which, and hold my arms above my head, hands clasped together. He then told me to resist as he used both of his hands to pull my arms down. I was pretty successful. Then I stood on the line and we repeated the exercise, except this time, he used two fingers. I was unable to resist, my arms sinking slowly despite putting all of my strength into keeping them up. Unable to believe it, I asked a strong-looking American to arm wrestle me with his arm over the equator and mine on one side of the line. He should have defeated me instantly, and did once we tried again on one side of the line. But on the equator, I threatened his manhood slightly as we tied, his strength diminished by the equator and mine not strong enough to fully beat him.

Some skeptics like to say that it’s all in your head, but I went into it thinking it was probably bullshit, so how could I be fooled? I’m going to choose to believe it was real so as to not disturb my sense of awe of our planet.

2 Replies to “Three Quito Tourist Spots That Are Not Overrated”